Book Review: No Gods, No Monsters, by Cadwell Turnbull 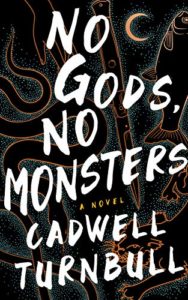 The blurb for Cadwell Turnbull’s No Gods, No Monsters promises “creatures from myth and legend,” but the blurb doesn’t do this book justice. What makes this book special, what makes it work so damn well, is the way the story is anchored in human complexities. Sure, there are a ton of cool ideas at play, including an interesting approach to narrative point-of-view, not to mention some great imagery. But what comes first, importantly, is clean prose delivering complicated but relatable situations, which doesn’t just engage the reader, it makes the reader want more; it compels the reader to get involved, intellectually and emotionally. What I’m trying to say is, this book is really, really good.

From the first paragraph Turnbull demonstrates a mastery of creating a tangible-feeling moment, of characters that readers can grasp as people, via a perfect mixture of interesting but grounded language and story choices. “We order drinks—me, a Corona because I’m basic as fuck; Tanya, a cider of some generic variety. . . . We both know I’m dancing around something. Every few minutes, she looks at me as if to say, ‘You gonna spill it or what?’” In terms of craft, as seen here, the writing is often a masterclass not only in effective dialogue, but in the partnering of dialogue with pauses, body language, and other kinds of nonverbal communication. Everything feels familiar enough, yet fresh; and it’s the kind of carefully executed writing which is even more marvelous for seeming easy and natural.

Turnbull doesn’t waste any time. That first paragraph telegraphs unease, and the story builds on this, utilizing slowly growing tensions, which is a hallmark of some of the best suspense and horror. Unease, discomfort, and pain aren’t just gimmicks: they are tied to the people involved in emotionally resonant ways. Even as some things are held back from the reader as “mysteries to be revealed,” Turnbull gives the reader plenty up front to deal with and process and be stunned by. The cumulative effect—from page one—is a building of gravity, a sense of something important happening, something the reader doesn’t want to miss.

In short time, the book goes into a scathing critique on the erasure of non-European perspectives of history, followed by a death-by-cop scenario. Even as the shift in narrative becomes political, what remains central are the people involved and their stories. Laina, for example, has to face the corpse of her brother. Confronted by his death, she is forced to grapple with the ways she may have failed him, including being unable to help him with his struggles through life, and a childhood incident which had been kept secret and somewhat repressed. Turnbull doesn’t just write about injustice in a thinly veiled angry rant; rather, we are given an immersive treatment on types and levels of human pain, on the ways we engage, ignore, and avoid pain, all of which gets woven into the larger story.

And then, yes: here come the monsters. By the time the monsters are on the page, the story has carried us through shame, anger, secrets, feelings of helplessness and powerlessness. We’ve looked at the way trauma acts upon people; we’ve looked at the struggle to find one’s own voice and strength in the face of terrible things. By this point, Turnbull can play with nearly any fantastic element he wants, because we are thoroughly engrossed in the people involved and their stories. As he weaves in more of the speculative, as he heightens the sense of horror, he also delights with a number of great scenes and visuals, all while layering the story with heart and substance and multiple kinds of social commentary.

The heart of this story is, undoubtedly, about otherness, and violence. Monsters in the novel are the literalized metaphor of “others;” that is, marginalized and/or oppressed groups in the US. They are shot, they are used, they are mistreated, they are misunderstood. At the surface level, monsters as metaphor for “others/otherness” is nothing new;  for me, it immediately calls to mind the True Blood TV series, which explored this concept in different ways (Sookie as a closeted and shamed telepath, vampires as feared but also victims of prejudice, etc),  as well as the Clive Barker vehicle Nightbreed (where monsters were hunted throughout history, to the point where they had to hide underground to survive). Turnbull’s story development and choices create a depth and personal connection which puts this work in an entirely different category; and rather than simply being about “victims” and “social wrongs,” this is also a story about standing up, about gathering together, and taking action.

Page by page, scene by scene, Turnbull presents an author’s observations of the real world within the framework of fantasy/horror, executed with a subtle, brilliant artistry. This novel shows that Turnbull is skilled in writing a host of moods, from charming scenes to awkward interactions to deeply personal pain to dread; he can imbue a range of characters with both purpose and life; and he’s able to infuse cool ideas with meaning by placing them in relevant contexts. No Gods, No Monsters is the first in a series which you do not want to miss.