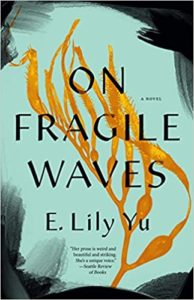 On Fragile Waves by E. Lily Yu was not a book I wanted to read. 2020 was already filled with hardness and tragedy, and I wanted to escape to fiction that was easy, fun, and light. But in November, I found myself craving poetry, and I was familiar with Yu through her short stories, particularly the gorgeous “The Cartographer Wasps and the Anarchist Bees.” When I saw the book cover of On Fragile Waves, I decided to give it a chance.

As I expected, Yu’s debut book was beautiful and utterly devastating.

Firuzeh, a young girl, is forced to flee with her parents and younger brother Nour from Afghanistan to Australia. Their journey is told in poetic prose, an achingly painful juxtaposition to the trials they endure as they are shuttled from place to place with little warning; a harrowing ocean trip; and then the mind-numbing waiting in a refugee camp in Nauru. Firuzeh witnesses her parents grow drained and fearful as they move further and further away from normalcy. The future becomes uncertain, and even mundane matters such as a simple shopping trip becomes drenched with horror as unspoken rules unknowingly broken have devastating consequences. And it doesn’t end when they are finally allowed into Australia’s mainland. Being allowed into another country doesn’t mean they are welcomed.

Despite it all, Firuzeh is also still a girl having to deal with the pains of growing up: of her parents showing preference to her younger brother, of feeling left out when other girls her age get to go to parties and put on makeup. Of watching her mother struggle to keep things normal and hide her own fear, to the point she overextends it on Firuzeh. Of dealing with loneliness. The only girl Firuzeh can call a friend is Nasima, a girl who died early in the days of their flight and occasionally berates with a caustic tongue, but also keeps Firuzeh sane and alive with knowledge that only a ghost like her would know.

The only other things that keep Firuzeh company are the stories. Folk tales at the beginning that attempt to turn the start of their flight into a grand adventure. Half-formed tales from Firuzeh when the words from her parents dry up from despair. Stories to explain and process and mourn when the tears refuse to come. Stories to distract from the fact that every day is fraught with danger. Stories that deal with disappointment when they finally do make it into Australia, and eventually, as Firuzeh is confronted with hatred and bigotry, stories that become a weapon to protect herself and wound others. And there are some stories that are so achingly beautiful, you almost—almost—forget all the bad things.

Occasionally Yu dips away from Firuzeh’s narrative to give other immigrants who intersect with her a voice as they deal with their own history and ghosts. But ultimately, this is Firuzeh’s tale, one that shows that even in the hardest circumstances, beauty can be found and even be used as form of resistance.