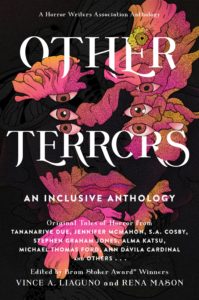 Greetings, readers, and welcome to another book review. The days are getting shorter, which means the nights are getting longer, which means I have a bunch of spoooooooky short stories to share with you all—the inclusive anthology Other Terrors, edited by Vince A. Liaguno and Rena Mason.

Other Terrors is a collection of twenty-four short stories that fall firmly under the “horror” subgenre of writing, but what makes this particular anthology unique is that the “horror” in these tales is the lived experience of being a minority in a world that constantly sees you as “other,” neatly subverting the classic horror trope of the “other” automatically being the villain (and, more importantly, highlighting the fact that those who view the “other” as an object of fear and loathing may, in fact, be villains themselves).

What this means in terms of the stories is that while there is plenty of goose bump-inducing and gore-filled descriptions on the pages, much of the subcontext is what it means to be living in a society that frequently goes out of its way to harm those who don’t fit in. Whether it’s a literal destabilization in the environment mirroring the body dysmorphia a trans character struggles with, the cabin-in-the-wood slasher’s environmentalist point of view, or a consuming collective of ancient riverfolk fighting exploitative gentrification, each story is much more than the surface-level creepy-crawly-feeling induced by good horror. In fact, the real chills arrive when you realize that while fictional and fantastical elements litter each page, the truth of these experiences is the actual evil of a world in which they can, and do, exist.

(At this point I do feel I have to point out that this is a collection of horror stories, which means that there are potentially triggering situations everywhere, including physical violence, emotional violence, sexual violence, frequent depictions of graphic death, and multiple other disturbing situations, so please be aware of what you can and can’t handle.)

One thing I particularly enjoyed about Other Terrors is the breadth of viewpoints brought into play by the diversity of contributors, along with how they intertwined with different styles of horror writing. There is something in this anthology for everyone (I would argue the whole thing is for everyone, but the intersectionality might not be there for some), including the slow buildup to an abruptly disturbing conclusion, the immediate realization that things are not as they should be, and the unexpected twist, all intermingled with gender, sexuality, and societal backgrounds that span the globe and give the story being told a unique flavor not always found in traditional horror. The authors aren’t afraid to stretch themselves, and in so doing, stretch the reader’s preconception of what horror can be.

Another thing I really liked about Other Terrors is that many of the stories frequently present the standard horror villain (zombies, dirty stranger walking into the diner, classic vampires and werewolves) as an initial threat, but then with context is revealed to be someone who was made an outsider due to society’s inability to accept them for who they are, and in most cases, exploiting them for who they are. At the same time, not every story is like this, which keeps the reader on their toes—sometimes the monster in the woods really is the unstoppable structural and systemic forces of socio-economic violence that gobbles you up in the night. In good horror writing, you’re never quite sure where the baddie is going to pop up from, nor what shape it’s going to take, and for being a collection of completely separate short stories, Other Terrors captures this feeling incredibly well.

Overall, while the horror genre might not appeal to everyone, I would highly recommend reading Other Terrors (or as much of it as you can handle at a time), because at the end of the day, all of the stories in it are true. What this anthology makes clear is that horror isn’t just a genre, it’s a lived experience for all too many people that live in this world, and it is our duty to each other, both on a societal as well as a personal level, to help those affected by the nightmare and find a way for them to escape it, even if it feels difficult or scary. I mean, as anyone who’s read a horror story knows, until you take down the monster for good, there’s no way to know who it will go after next.

Read if: you don’t mind the occasional bit of viscera in your teacup; you’ve ever been treated like one of “them” instead of “us”; you can deal with a sleepless night spent pondering the existential troubles of the world.