Book Review: Screams From the Dark, edited by Ellen Datlow 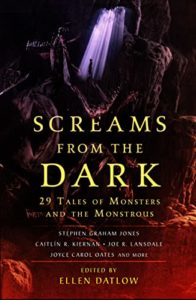 Most writers in genre consider it a career landmark to get into an Ellen Datlow anthology. Not every anthology gets the same traction, but recent successes include 2021 titles When Things Get Dark: Stories Inspired by Shirley Jackson from Titan and Body Shocks: Extreme Tales of Body Horror from Tachyon. In 2021 she was a World Fantasy Award finalist for Edited By (Subterranean Press), a Locus Award Winner for Best Editor, and a Hugo Award Winner for Best Editor, Short Form, among other honors. But this is not unusual: she’s won so many awards, she could probably have them melted into a life-sized robot.

Datlow tends to put out anthologies that are crammed with stars. Upcoming original anthology Screams from the Dark is no exception. It features a number of headliners who embody various kinds of writerly stardom. There are multiple-award winners, such as legend Joyce Carol Oates, who has taken home literary honors as well as genre honors; Jeffrey Ford, who never met a major genre award he couldn’t win—or at least get very close to winning; and Brian Evenson, who has taken home awards and prizes, as well as an NEA and a Guggenheim fellowship. There are commercial successes, such as bestseller Richard Kadrey, who is well known for his Sandman Slim series; and bestseller Stephen Graham Jones, whose recent books The Only Good Indians and My Heart is a Chainsaw have become undeniable hits. In fact, most of the writers here are either award-winners, well-known, or very well-regarded within the industry—or some combination of the three.

You can crack the spine on this anthology to any random page and find a solid story. Everyone here knows how to put a good narrative together. There are twenty-nine stories altogether, but I’ll highlight a few I found notable.

“The Ghost of a Flea” by Priya Sharma is, in some ways, reminiscent of stories in which Bram Stoker encounters a vampire and is inspired to write Dracula based on the encounter. These kinds of stories vary greatly in quality and content and are fairly popular. Two things set this piece apart. First, Sharma is an excellent storyteller. Second, she turns her attention to a far more interesting subject: eighteenth century polymath William Blake, and in particular, his painting called “The Ghost of a Flea.” Sharma’s style smoothly evokes the era without becoming awkward or heavy handed. John Varley (who was an actual contemporary and friend of the historic William Blake) comes to Blake hoping to find help in stopping what seems to be a supernatural evil of some kind, a killer which is leaving a string of bodies behind. The story centers on a determined and intelligent couple, William and his wife Kate, who are resolute in the face of mounting terror. Those more familiar with the era or the individuals than I will likely find even more to admire about this short, but you can know absolutely nothing about them and enjoy it as an effective piece of fiction.

“What Is Meat with No God?” by Cassandra Khaw is a bloody fantasy-horror piece about a kind of soldier who just won’t stay down. Fantastic prose and style drive what is otherwise primarily (pretty damn cool) imagery and idea. There is, potentially, a good amount of subtext for those who want to read it that way. There might be commentary on war, religion, power and politics, and more. It could be, for example, a dark reflection on the impact of political machinations, and how greed causes the dehumanization of the individuals caught up in the game. Then again, all of that may be unintentional; it may just be a side effect of whatever the reader brings to the read. In other words, it could just be a gory, fun, well-executed horror idea.

“The Special One” by Chịkọdịlị Emelụmadụ is a very strong story. An intriguing opening leads to lovely prose and occasionally great lines, and the entire piece is filigreed by clever ironies, contradictions, and observations. The story has the feeling of a fable, one which slowly builds to a very dark ending. A girl named Joy has a bit of unusual talent and is consequently fed her parents’ huge expectations, only to grow up never quite meeting those expectations. Until one morning, when Joy wakes up in the embrace of a python. She decides the python is a portent, that it’s a divine messenger, and more importantly, her way to the greatness for which she was born. The primary theme is fairly clear, but there are a lot of fantastic nuances along the way, as well as a sharp, classic horror finish.

“Here Comes Your Man” by Indrapramit Das opens with clean, comfortable, yet carefully interesting prose, which effectively draws the reader in. The main characters, Aditya and Megha, are in a situation which will probably feel at least somewhat relatable to folks who travel, as well as to folks who have experienced some degree of cultural displacement. They’ve come to a rural town for a festival, and the locals treat them like tourists. Megha’s family has a house nearby, but she hasn’t been back in a long time; and Aditya’s Bengali has gone rusty from years abroad. Together they occupy an awkward space of both belonging and not belonging at all. In the context of travel, and especially during an event like a festival, it’s not unusual to strike up conversation with a stranger. In fact, the friendliness is probably a welcome change. And yet, a major strength of Das’s writing here is the subtle anxiety underlying even the opening; the hard-to-pinpoint tension. Behind the stranger’s languorous smile and friendliness, you just know something ain’t right. The encounter with the stranger turns sour, and in the aftermath, after the couple leaves the man behind, subtle discomforts build in force to become complex conflicts. This is horror, after all, so things are only going to get worse. But Das makes sure the journey is an absolutely gripping one. This piece is brilliantly complex, brutally honest, and layered with petals of intense transformations.

Some of the best writers working in horror have original stories in this anthology. It’s definitely worth your time. Start with the stories I’ve listed above, and then work your way through the anthology from there. You are in for a bloody good ride.