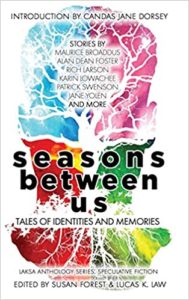 Back in April this year, I turned fifty years old. It was very similar to my birthday last year which also took place during Covid quarantine. No fanfare, very quiet. It was a sober milestone; it’s not like I feel old, per se—I had a much harder time turning thirty. But the lack of hoopla and festivities made me feel more keenly the weight of years I’ve been through thus far. Perhaps this is why I was drawn to the anthology Seasons Between Us: Tales of Identities and Memories. It contains twenty-three stories ranging from fantasy to dystopia to science fiction and poetry, all exploring the decisions and the moments that makes up a life, whether it is long-lived or cut short, mediocre or action-packed, or somewhere in between.

The roster for this anthology runs the gamut of well-known authors to relative newcomers to the field. “Dress of Ash” by Y.M. Pang took the Cinderella-sister trope and spun it into a tale of a master sword-wielder wishing to protect her younger step-sister. Maurice Broaddus’s “The Sabhu My Destination” shows how a Black man changes himself through growth, creativity, and technology (and is loosely framed around the seven stages mentioned William E. Cross’s The Negro-to-Black Conversion Experience. I see you, Maurice.) “The Veil Between” by Karin Lowachee slips in and out of time as its protagonist tries to cling onto the moments of his three lives with three lovers. And Jane Yolen’s “The Astronaut’s Four Seasons” is a brief but gorgeous poetic summation of, well, an astronaut’s life in four different parts of her life.

Some of the stories focus on quieter elements of life. The ghosts showing up in Joyce Chng’s “Blue Kueh” only wish to be remembered, even if their appearances startle their former social workers. I fell in love with S.B. Divya’s “Messages Left in Transit, Devices Out of Sync”, a simple story about a woman who, while she is denied becoming an astronaut, still finds childbirth (the cause of her grounding) an amazing miracle. “Clear Waters” by C.J. Cheung has a father struggling to accept his daughter’s choice in an android partner, while Rich Larson’s “Robocare” has a grumpy old man taking out his grief on the loss of his best friend on teenage hooligans—and realizing he has more in common with them than he thought.

“The Hidden Knowledge Society” by Bogi Takács focuses on a younger protagonist, a girl who is convinced she is an alien hybrid (and maybe she is), or might be going through growing pains in general. Meanwhile “Hope to See the Ghost Tonight” by Patrick Swenson melds the fear of being ten years out of high school with a freaky hide-and-seek game which may hold dangers in the dark. And Karina Sumner-Smith’s “A Grave Between Them” tells of a teenage girl granted a power that makes her far more world-weary than she ought to be.

I don’t have space to go into all of the stories, but at the end of each story, each author gives advice to their younger selves. The advice is brief but poignant, personal, and fitting. It made me consider what advice I would give my younger self. I doubt I would be as insightful, especially since I’m emerging on the other side of 2020. It’ll be more like, “Stop trying to please other people. It’s okay to say no. Play music loud, keep reading, and keep loving. That’s how you’ll stay true to yourself. Oh, and swear more. Trust me. It’s not all that bad.”