Book Review: She Who Became the Sun, by Shelley Parker-Chan 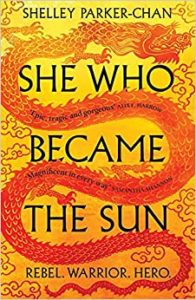 Before I get into the full review, I just want to say that I love She Who Became the Sun. Any fan of historical fantasy, historical Chinese romance dramas, intrigue and suspense, or just knockout writing should read this book.

All right, now for the full review where I get into why She Who Became the Sun is so amazing. Shelley Parker-Chan’s She Who Became the Sun was pitched as Mulan meets The Song of Achilles and follows Zhu, a young woman who steals her dead brother’s identity after the last of her family dies. Through innumerable battles, both inside of herself and out, Zhu convinces the world she is her brother, Zhu Chongba, and does everything and anything she can to secure greatness even beyond that fated for her brother.

In a stunning remix of the rise of the Ming Dynasty’s founding emperor, She Who Became the Sun brings that era to life through detailed descriptions of the world and settings that show the darkness spurring all of the characters and events in the book. And that’s one of the many things I love about how Parker-Chan unraveled and told the story’s events. The reader is introduced to this harsh, dark, and painful world where dastardly and courageous Zhu etches out her survival. Then the book ends in so much light and intensity that it’s hard to imagine how Zhu goes from point A to point B if you haven’t read the book.

While She Who Became the Sun ends and begins with Zhu, the book is about so much more. The book is told in alternating points of view that added so much tension and titillation I kept wanting to skip ahead. The writing was just too damn good, though, and I didn’t want to miss any information, backhanded comments, or blush-inducing subtle flirting.

To be honest, I don’t usually like historical fantasy, but Parker-Chan blended both parts in such a way that I forgot I was reading within that genre. Instead, I felt like I was absolutely wrapped up in an intense Chinese drama where I needed to see the complicated villain get both their revenge and comeuppance; I would have screamed if the love interests didn’t get together; and I was shredded when Zhu did what she always did—whatever it took to win and survive.

She Who Became the Sun is the most highlighted book I’ve read this year. There are so many passages and exchanges between characters where Parker-Chan wonderfully showed the horror and intimacy in everyday moments shared.

There were a lot of gender politics throughout the pages, too, making She Who Became the Sun more than thrilling, sexy, and adventurous. The novel pushes into yet another realm, adding more for my reader’s mind to gnaw on. If you’ve been on the fence about reading Parker-Chan’s She Who Became the Sun, I hope you take this as the sign to pick up the book and embark on Zhu’s journey and the rise of an empire.