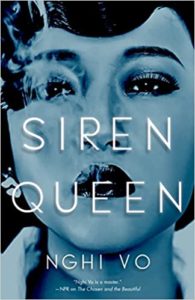 Nghi Vo’s Siren Queen traces the rise to fame of Luli Wei, a Chinese American actor in a darkly fantastical and magical pre-Code Hollywood. Here demons, gods, and monsters lurk under the skin, names have power, and becoming a star comes with a price sometimes paid in blood and life. Blending themes of racism, erasure, and LGBTQ+ discrimination in 1920s Hollywood, Vo crafts a smart, sexy, and engaging tale of fame.

From the beginning of the book, Vo describes the movie scenes as if they were regular scenes of the story. One moment, the reader is on a set or in a theater with the book’s characters, and the next, they are in the action, but more importantly, the movie’s emotions. This structure added an interesting, quickened pace, and an unreal sense that worked wonders alongside the already fantastical world of Siren Queen.

And just like the movie scenes, the magic and fantasy elements weave in smoothly with the rest of the story’s world and logic: the actors don’t just get their stars as plaques in the sidewalk but ascend to become something even greater, ghosts of imprisoned and Chinese railroad workers shuffle along beside us and sleep beneath our mountains. Vo’s world is one of vivid description and a mystical realism so well-written it all falls into place like facts.

Themes of racism, privilege, and Chinese labor exist on every level of Siren Queen. Vo captures both the pain and struggle of being a person of color. There’s the constant drive to be perfect, and unlike every other person who looks a little like you, tangled with the weight of constantly not wanting to make a fuss or stand out. Luli doesn’t so much as balance between these two extremes but dances back and forth between them.

The theme that speaks the loudest to me throughout most of the book is of finding queer community and living in a way that aligns with who you want. Luli finds her people quickly, but community comes at a price. Vo does an excellent job at depicting both physically and emotionally what it’s like being in queer spaces with other queer people and identifying it as a safe place—well, safe for some.

All the conflict and tension throughout the book builds and releases to such a soft and complex ending that I was floating for hours before I realized some questions hadn’t been answered. But thinking back on where Luli started and where she ended, the heartaches, sexual encounters, and deals she made, none of the unanswered questions mattered.

And a part of me believes that’s the point. Whether or not some of the smaller bits and pieces mentioned were tied up didn’t stop the ending from being an absolute joy and triumphant.