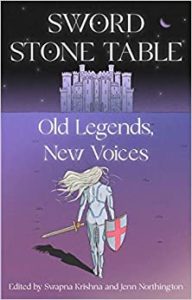 Remakes are a big part of our culture of the fantastic. Some people love them, some people are tired of them, and for some people, it depends on the topic.

As I write this, Josh Pearce and I just posted our Locus film review of Godzilla vs. Kong, the latest reimagining of a creature which has starred in over thirty movies, not to mention being the center of other types of media; and I just watched the latest Mortal Kombat flick and Kung Fu episode, both of which revisit popular concepts. On the recently announced 2021 Locus Awards Finalist list, two of the anthologies are themed around very familiar topics: Jonathan Strahan’s Made to Order (about robots) and The Book of Dragons (. . . about dragons.) Even the recent Hugo ballot has a few titles which revisit old ideas, such as Maria Dahvana Headley’s Beowulf and Tracy Deonn’s Legendborn, the latter of which tackles the King Arthur myths via their descendants.

Speaking of King Arthur, this brings me to the point of this review. When I first received an email about a book reimagining King Arthur stories, I groaned inside. Many people love retellings of fables, myths, and so on, but for me, well. I see so many of them. And the great bulk of them (at least, to my taste) just don’t do enough to be interesting, or to set themselves apart. For Arthurian tales there exists a Wikipedia page, “List of works based on Arthurian legends,” which is too massive to count the entries, and even then, the list is probably not exhaustive. So, I initially didn’t read the details in that email.

Later, when I was struggling to settle on a book to review, I came upon the email again: “SWORD STONE TABLE: Old Legends, New Voices.” This time I noted the editor names, as well as some of the author names. I finally absorbed the opening pitch: “Where are the gender-bent King Arthur stories? The race-bent retellings, the queered ones?” And I thought, wait, this sounds hella cool.

Dear readers, I was not disappointed. This book goes beyond “hella cool”: it leaves “hella cool” in the dust!

The book features sixteen original stories separated into three sections: Once, Present, and Future, and is written by notables and award-winning authors such as Maria Dahvana Headley, Waubgeshig Rice, S. Zainab Williams, Ken Liu, Alexander Chee, and more. For some of you, I know—as they say in the comic books, ’nuff said. But my favorite pieces absolutely blew me away.

Daniel M. Lavery’s “How, after Long Fighting, Galehaut Was Overcome by Lancelot Yet Was not Slain and Made Great Speed to Yield to Friendship; Or, Galehaut, the Knight of the Forfeit” is a perfectly strange, somehow endearing play on the kind of personality (usually, but not exclusively, depicted by male characters, as is the case here) which loves heroic, honorable battle, and develops the strongest adorations in being defeated. I still don’t know how this tale was pulled off without feeling toxic, but it was. Moreover, it’s told in a style which evokes older storytelling, both in sentence structure and word choice, yet it flows well, it’s readable, and is nicely paced. It’s kind of romantic, actually, and oddly touching; it asks, what is friendship in the context of people whose lives are occupied by war—what is true love, for a knight? And the answer is very different than the usual. Ultimately, Lavery renders a great tale and a skillfully delivered twist to a familiar story.

Nisi Shawl’s “I Being Young and Foolish” is the story of Nia, a traveler from Nakasongola, who has been invited to study with Merlin. Nia happens to be an albino woman, and she happens to have magic of her own. This story is an exquisite slow burn, one which rewards a patient, careful read. The brightest joys are found in the immersive experience of Nia, in whose point of view the tale is deeply rooted. Shawl carefully develops a sense of world and place and time, bringing each moment to life via deliberate detail. Elegant writing is the point, as well as the discovery of world and ideas, but these are not the only points. Nia is an utterly engaging character, who (importantly) meets Merlin more or less on equal ground. Nia takes the reader through a somewhat anthropological examination of the wizard and the people he works with. This results in a subtle, brilliant, and gentle examination of otherness, power, gender, and various kinds of relationships, one which plays with the idea of the exotic to wonderful effect. Read it, think about it, let it linger after the reading is done.

Silvia Moreno-Garcia’s “A Shadow in Amber” is a breathtaking twist on a classic tale, one which is best read without knowing too much. Unsurprisingly, the story is strong enough to still be great if I laid out the plot; but the structure follows a deliberate sequence of reveals, and my advice is to avoid reviews and descriptions, just read this one and let the story do what it’s meant to do. Immediate tension and interesting characters are instantly engaging, yet the story still builds beautifully, as each section adds a layer and serves as a lure, pulling you in deeper. It’s a truly wonderful and unexpected reframing of the familiar, both fun and lined with important meaning; a piece which delivers a really lovely intensity.

The anthology opens with “The Once and Future Qadi” by Ausma Zehanat Khan, a story which I just can’t praise enough. People overuse the term “instant classic.” And yet with this story, I think of the stunning works taught in literature classes, examined over and over by sharp minds, featuring prose that stands well above most. In other words, this one is a work of art. Elegant writing, a great setup, and beautiful tension deliver what is essentially a royal court drama (with a dash of the detective trope) of the best kind. The read is rich in interesting detail but not distracted by it. The battle is one of words: it hinges on elements which are hard to get right and to make interesting, but the skill on display here is exceptional. It’s also an examination of intercultural communication, including the weaponization of racism. If you read one story in this book (and you really should read more than that!) make it this one.

All of which is to say, do yourself a favor: don’t overlook this book. Seek it out. Make time. Savor every word. It’s definitely worth it.