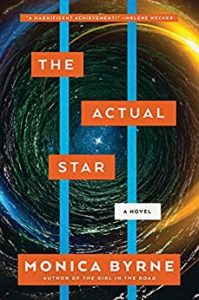 Hola amigos y amigas, espero que tu verano esté yendo bien. For this month’s review, we’ll be looking at a millennia-spanning masterpiece by Monica Byrne, The Actual Star, which follows the lives, both past, present, and future, of three extraordinary individuals, and how their relationships intertwine over the long years of historical time.

Now, some of you may be wondering why I began my traditional greeting in Spanish, but fret not, because there’s a reason I did so (aside from growing up in Southern California). The Actual Star is one of those rare books that seamlessly intermingles multiple languages in a way that, while initially intimidating, makes perfect sense within the narrative of an epochal tale spanning the dissolution of the known Mayan empire into our present day into a fantastic science fiction future that encompasses climate change, fully expressed human sexuality, and what feels like five other books’ worth of philosophical and metaphysical treatises.

One thing I have to be clear upfront about The Actual Star is that this is not a light read on a beach chair while you watch the waves roll in. Byrne grapples with a variety of weighty topics, ranging from the classic philosophical question of “am I a butterfly dreaming I’m a human, or a human dreaming I’m a butterfly” up to the entropic heat death of the universe and how that relates to our fleeting impressions of the sparrow crossing the stage (and what might be setting the scenery). Furthermore, the shifting viewpoints and linguistic choices can initially present what seems to be an impenetrable barrier, but for those willing to press on and immerse themselves in what Byrne is trying to express, a richly developed world and compelling characters await.

Now that I’ve hopefully not scared you off, let me talk about some of the things that I really enjoyed about The Actual Star.

The first, and I daresay, the most important, is how effortlessly Byrne weaves together the three different timelines that take place in her story, each one separated by a thousand years (there may or may not be some Mayan influence on the choice of dates). While initially appearing as discrete threads in an unknown tapestry, the lives of the protagonists gradually braid together in a harmonious whole reminiscent of Neal Stephenson’s Cryptonomicon, or L.E. Modesitt Jr.’s Saga of Recluce series. Though attentive readers will no doubt make educated guesses as to who is who in the vastly separated timespans, it was waiting to see how Byrne brings her various strands together that kept me turning pages, and I felt the eventual payoff was worth the time I spent getting there.

The second thing I really enjoyed (especially as a history and political science major) is the way that The Actual Star presents the passage of time. One of the sections that really stuck with me (and I’m paraphrasing here) is when one of the characters talks about what the passing of a thousand years actually means, and how vastly different the world would appear to those who think they can envision such a thing. It’s abundantly clear that in The Actual Star, Byrne did her homework, not just on what the world might be, but on what the world used to be, and it was equal parts fascinating and depressing to see her vision of a far-future (i.e. one thousand years from now) humanity wandering the planet, not least because the thousand-year past we take for granted was so different from our own reality as to be almost incomprehensible.

Now, let me assure those of you who think this might be a dry and boring text more concerned with its philosophical underpinnings than telling a good story—this is not the case. Byrne also does a fantastic job of making sure all her characters are believable in their humanity, no matter which epoch they inhabit, and their relationships are just as important to the underlying message as any of the deliciously subversive themes on property ownership, sexuality, and what it means to be human in a world that operates under the relentless march of time.

Ultimately, if I can leave you with one thing, it’s that The Actual Star is a boldly daring examination of what it means to be human from a non-traditional perspective, one focused away from the Western-European colonialist lens and zeroed in on a culture many think lost to the sands of time, but that still exists very much to this day. Whether you recognize it, depends on you.

Read if: You like the journey more than the destination; your world is broader than the place you were born; you’re wary of jaguars.