Book Review: The Annual Migration of Clouds, by Premee Mohamed 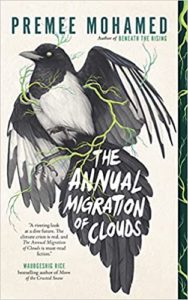 Released at the end of September from ECW Press, Premee Mohamed’s novella, The Annual Migration of Clouds, was a perfect storm and excellent—but emotional—read. Set in a post-climate disaster Alberta, Mohamed’s book follows Reid. She’s a young woman infected by a mind-controlling fungus who gets accepted into a prestigious school far away from her home; as she makes the decision and preparation to leave, quite possibly for good, Mohamed weaves together Reid’s final weeks.

If you’ve read Mohamed before, you know that her work is evocative, scary, and beautiful, often all at the same time. She has a way of constructing sentences that create this rush and flow of words, all-powerful and impactful without losing the story or its emotion. The tension and relationships rise in her work in a way that demands to be engaged with. That style made the world clear, distinct and all the moments in the book feel full, heavy.

Such fullness created character bonds strong enough to make me wonder, like Reid, is it right to leave these relationships? I particularly latched onto the relationship between Reid and her mother. It was handled with delicate care and in such a tender way that my eyes stung several times while reading their scenes.

I went into The Annual Migration of Clouds with little idea of what the story was about. But Mohamed set up the book in the first few pages in a way that instantly sucked me into the story, had me concerned for the characters, and mournful of my own past—due to how closely related Reid’s story of leaving home is to my own—while also keeping me in a state of WTF about the state of the world.

Out of all of the things that Mohamed did well in the book, the one that stabbed me deepest was the depiction of someone leaving home. Throughout the book, the theme came up in a myriad of ways. Sometimes the leaving was in death, and other times it was like Reid’s—a leaving toward a, hopefully, better place.

The Annual Migration of Clouds is less about the destruction or aftermath of disaster and more focused on how communities, families, and people learn to live together and apart. Despite all the disease, death, and decay surrounding Reid and her community, they still work to hold onto what they have and try to cherish the things they are forced to let go.