Book Review: The Ballad of Perilous Graves, by Alex Jennings 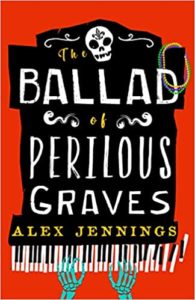 The soul of New Orleans is in danger, and it’ll take everything to save the city. In Alex Jennings’ spectacular debut, the city of New Orleans is transformed into a magical city where musical creatures and spirits, mages, and more flourish within the city’s limits. Magic, music, and graffiti that both moves and infects those who walk through it make up the everyday world of Perry Graves—and it’s also everything he must save as the musical soul of New Orleans begins to vanish.

So, while the New Orleans in Jennings’ book is totally fantastical, it doesn’t really read that way. It reads like the authentic New Orleans—the place beneath what visitors and tourists see. Jennings takes the architecture, art, people, music, and traditions that make New Orleans and shows the magic connecting them while weaving a story about how important New Orleans is.

While reading through the imaginative adventures of not just Perry but the haints, spirits, superheroes, artists, and musicians that make up Jennings’ story, I kept getting hints of jazzpunk influences. Music is just as powerful and as influential as magic. And often, music is magic in The Ballad of Perilous Graves. Music can change the characters, teleport them to new places, and even heal.

There were some moments where I couldn’t tell why something was getting such detailed attention, but in the end, it always made sense. Knowing how a person moves through New Orleans is essential because they are New Orleans and just as significant a factor in the story as the city itself. And don’t you just love a story where the setting is a character, too? When a location, a real tangible one, is given the page time it deserves?

I couldn’t tell which parts of Jennings’s prose I loved the most: how he described music’s power over people or how he depicted New Orleans showcasing all the history and trauma of a place in a way that still held so much joy and hope. The Ballad of Perilous Graves reads like a love letter to the city and a tour guide of New Orleans’s spiritual and musical side.