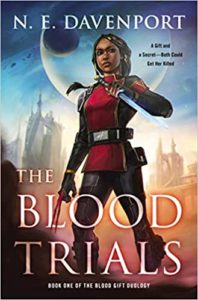 N. E. Davenport’s science fiction debut, The Blood Trials, blends action, fantasy, and a bit of a murder mystery to form a modern military SF story. The first in a duology, The Blood Trials follows Black main character Ikenna as she tries to saddle her grief to survive a brutal initiation ritual in her racist and misogynistic society. She wouldn’t be going through with it if it wasn’t for her need to find answers to who killed her grandfather, the man who was both her mentor and confidant. Somewhere within the ranks lurks a killer, and Ikenna will stop at nothing to bring them the death they’ve so rightfully earned.

From the start of the book, Davenport introduces readers to a society and culture built on the back of a lot of blood, war, and racism. It feels all too familiar, yet this martial world is an alien planet with fantastical creatures, outlawed blood magic, and cursed beings. Gods and guns go hand in hand in The Blood Trials. Davenport creates a unique and original world filled with characters whose motivations and intentions readers can’t help but relate to¬—even as the characters go through extraordinary and brutal blood trials to join their country’s rank of elite killers.

It’s kind of hard for me to explain just how brutal and gruesome events get in The Blood Trials. The story ramps up from one violent, disturbing encounter to the next, with the writing being both visceral and emotional. Each bloody scene has depth and leads to more answers that compel you to keep reading, which was one of my favorite aspects of Davenport’s writing.

The worldbuilding is built into every interaction and moment. I will say that sometimes it slows the pacing or over-explains something, but never in a bad way. I left each scene and moment knowing I had learned something new about the world, characters, and mystery at the heart of The Blood Trials. This type of writing, mixed with the modern dialect and language of the characters, made the novel easy to read and follow.

The themes of racism and misogyny, though familiar, took on a new life in the brutal war culture where fighting and prowess are championed. Like with all aspects of The Blood Trials, the themes are important and tied into the plot and the world itself. While the world and themes may be heavy, brutal, and unyielding, the relationships built and sustained between the characters are heartwarming, funny, and very much the interactions of young adults raised in a society to be killer soldiers with a knack for violence and history.

And the snappy and funny voice of Ikenna makes The Blood Trials a great beginning to what I imagine will be a go-to book for many readers interested in military science fiction with fantasy elements from a diverse perspective.