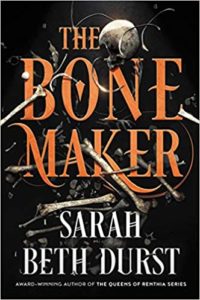 Greetings, readers! This month, it’s time to get a bit grisly with The Bone Maker by Sarah Beth Durst, who always delights in finding new ways to fill her protagonists’ lives with danger and mayhem.

The Bone Maker takes place in a new universe Durst has created where humanity can harness the power of, yup, you guessed it, bones, in order to accomplish a wide variety of magical effects that come in three flavors—carving bones to create talismans that imbue the holder with anything from super speed to stealth to flight (well, more of a controlled glide really); reading them to foretell the future; or transferring their power to create life in something else.

It’s this last power that’s at the heart of the book, since while using animal bones to give life to a construct is just fine (and the type of bone used influences the power available to the construct), using human bones is strictly forbidden by their society—for any reason. The inhabitants of The Bone Maker are still recovering from a terrible war fought against a renegade bone mage who decided that the rule was more of a suggestion and subsequently raised an army of Horrible Things that were barely stopped by a group of five heroes (as one does), but when one of the heroes dies in the fight, the main protagonist, Kreya, decides that maybe the rule against using human bones is more of a suggestion as well.

(These aren’t spoilers by the way, this all takes place before the book starts and are laid out in the first chapter, so please put your pitchforks down.)

What I really enjoyed about The Bone Maker is that it feels much different than Durst’s previous works in a subtle, yet important way. Durst has always been excellent at creating nuanced characters who feel like real people of a variety of ages, but The Bone Maker is very much the story of heroes who had to keep on living after their “happily ever after,” and while I don’t think the word “mature” quite encompasses the depth of the interactions between them, the problems they must face and overcome are problems most stories don’t delve into, because at that point the story is already over. In The Bone Maker, Durst doesn’t hesitate to dive into what it means to lose someone you love and what you might do to get them back, as well as the way relationships change when the years start passing you by.

The Bone Maker also features less overt carnage than Durst’s previous works (like the Queens of Renthia series), as the wounds and battles tend more to the emotional and mental side, but that doesn’t mean there isn’t any action to be found. One of my favorite scenes involved a spider-tank-crawler thing and what I’m pretty sure was a pack of hyper velociraptors, so fans of Durst’s descriptive chaos will have plenty to sink their teeth into throughout the course of the story.

I would also be remiss if I didn’t point out one of the other major themes of the book: how people value the lives of others compared to their own. It is a theme that weaves its way throughout the entire story and one which Durst examines from a variety of angles, and it is a theme that is both timely as well as ageless. On that basis alone I’d recommend the book, but the good news is that it’s part of an excellently larger package.

Overall, I greatly enjoyed the world of The Bone Maker, and I appreciate that Durst is so willing to try out new concepts and ideas on a regular basis while still keeping the focus on her characters. This is definitely a book that will read differently depending on when in their life someone reads it, and that is a difficult and impressive achievement to accomplish. If you haven’t read one of her works before, The Bone Maker is an excellent place to start.

Read if: You like weird rag dolls and bonebots; you want to punch down an entire honest-to-goodness tower; you ever wondered what hero retirement looks like.