Book Review: The Death of Jane Lawrence by Caitlin Starling 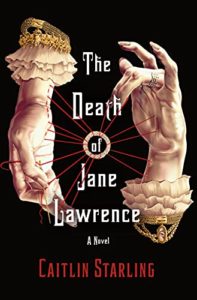 The Death of Jane Lawrence is being marketed as a gothic novel. Which is fair, I guess, but it’s kind of like marketing a Wagyu beef burger as a sandwich. The Death of Jane Lawrence might start with gothic trademarks like a dilapidated mansion, a woman in dire economic straits who has become caught in a dangerous romance, and of course, very unpleasant weather, but it’s a lot more than that. It’s set in a fascinating alternate history England and the plot is powered by a complex magical system based on . . . calculus.

Yes, calculus. Heroine Jane Lawrence begins the story as an accountant with a deep love for mathematics, and it’s math that sees her through the story’s trials. Orphaned by war, Jane grew up loved but feeling alien from her adopted family and small town. Hints sprinkled throughout the text (like the way Jane learned to overcome her resistance to making eye contact or struggling with other kinds of social cues) suggest Jane is neurodivergent, and that the structure of mathematics provides her support in the world. When her guardians are forced to move to a larger city, Jane fears she won’t be able to succeed in their more complicated social realm, and decides she must marry a local bachelor—preferably one who will be content to let her exchange her accounting skills for a place in his household.

Jane proposes this unusual arrangement to her town’s local doctor, Augustine Lawrence, as she’s realized he’s something of an oddball himself. He lives in his family’s isolated country mansion alone, save for a pair of servants, despite the difficulties his sleeping arrangements make for his career. When Jane proves her worth as a surgical assistant, Dr. Lawrence agrees to marry her, on the very gothic condition that she never visit his estate.

Of course, the situation is quickly upended: Jane and Dr. Lawrence become smitten with each other, and a crisis forces Jane to spend the night at the mansion, where she begins to see the spirit of Dr. Lawrence’s dead first wife, as well as some even more unsettling supernatural beings. When Jane meets a group of Lawrence’s friends from medical school, she discovers the group has been dabbling in magic, and that Dr. Lawrence’s family were practitioners of the supernatural arts. After a magical ritual goes awry, trapping Dr. Lawrence in the bowels of the house, Jane realizes that her mathematical mind might help her work magic to save him.

The Death of Jane Lawrence is the kind of book that lays out a lovely set of genre expectations which it first meets and then slowly begins to subvert. By pushing into the weirdness of the novel’s alternate history setting, Starling spins her gothic tale into the realm of mathematical, cosmic horror. If you love stories with complex, interesting characters forced to function where magic, science, math, and terror blend, this story will definitely suit your palate.

Wendy N. Wagner is the author of the forthcoming horror novel The Deer Kings (due out summer 2021) and the forthcoming gothic novella The Secret Skin (fall 2021). Previous work includes the SF thriller An Oath of Dogs and two novels for the Pathfinder Tales series. Her short stories, poetry, and essays have appeared in more than fifty venues. She also serves as the managing/senior editor of Lightspeed Magazine, previously served as the guest editor of Nightmare’s Queers Destroy Horror!, and is Nightmare‘s current editor-in-chief. She lives in Oregon with her very understanding family, two large cats, and a Muppet disguised as a dog.