Book Review: The Lies of the Ajungo by Moses Ose Utomi 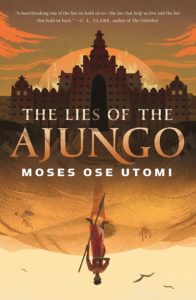 “There is no water in the City of Lies.”

With that beautifully provocative line, Moses Ose Utomi begins a slender book which reads simultaneously like a slice of epic fantasy and like fable. Let’s be honest: it’s a great opening line. And there are many more fantastic lines to come. Better yet, as wonderful as this brief tale is, it’s anything but vapid.

In the space of a few paragraphs Utomi creates a fresh-feeling world, each line bright with sparks of subtext on our real histories, effectively using the fantastic to discuss our own sociopolitical dynamics. As interesting as the world is, Utomi wisely doesn’t waste time: he sets up an innovative problem and gives us a compelling character with serious motivation who rises to try to address the problem. Standing back and looking at the structure, it’s a fairly common one. But Utomi makes it engrossing by breathing his own creativity into the story form, and all you want to do is turn the page to see what happens next.

Tutu is a boy who lives in the poorer area of a city suffering yet another drought. Generations ago, the ruler of the city struck a deal for water with outsiders called the Ajungo. But not only is the water the Ajungo provides not really enough for survival—death from dehydration is common among Tutu’s people—but the Ajungo demand that every year, each and every child who is turning thirteen must have their tongue cut out. Tutu’s time is approaching, and his desiccated mother draws closer and closer to death. There is one more option for a poor child such as he, and that is to strike out into the Forever Desert, alone, in search of a water source to free his people. With little more than determination, desperation, and most importantly, his mother’s love, Tutu sets out on a hero’s quest, one which could be both folly and fatal.

Prose is a feature here, never flowery but—as with the opening line—occasionally delivering phrases and sentences which just feel satisfying to read. Tutu is someone you can root for who is the perfect combination of being complex enough in his own ways to be interesting and naïve enough to provide a sense of discovery for the reader as we wander the world together.

It doesn’t take long to realize that one of the central themes of this book is relationships. The theme is delivered through Tutu’s relationship with his mother, the various kinds of relationships he forms along the way (some of them antagonistic), and the relationship Tutu and others have with institutions, like the ruler of the City of Lies; not to mention the relationships of the people of various cities with each other. Part of this is about the different kinds of bonds one forms in different circumstances, and about the potential for people to connect in meaningful ways. But the way a few of these relationships shift over time is key, and a big part of this is the way Tutu defines himself, in relationship or as reflected by everyone else. This theme is presented in a subtle way; you might not see it unless you are looking for it, but it is no less powerful.

Power is another important theme here, and this one is subtle in places, more obvious in others. Where Utomi takes this theme is wonderful, as he explores not just power and control as being defined by need or commodity (he does explore these, but goes deeper), but the ways in which we define ourselves according to the dictates of the powerful—often without reflection or even realizing it. Tutu’s quest is also a quest to resist power, which in part includes realizing what power even is, where it comes from, and what it’s actually doing to him. There are several other important strokes here, such as the way mistrust is built and used, the way it creates barriers between potential allies, the way it’s passed down; the complex nature of truth; and, ultimately, what it means to be a hero.

Heavy themes aside, the adventure itself is front-loaded, as is the exploration of the world: a boy trying to survive in one of the harshest settings possible, and anyone he might meet could be out to kill him. Not only that, but the boy has no skills, really, to succeed in his quest. In fact, things do get pretty bloody from time to time. They also get emotional. For me, the emotionality was somehow very tasteful; present, effective, but never pushing too far. Depending on what kind of reader you are, the narrative has the potential to hit you pretty hard.

The world itself an intriguing one, complete with a number of cool details, but the world building is sketched only by what’s needed for the story. It feels like a world ripe for even more stories. Fair warning: some readers may feel like the world building is underdeveloped. For me, it felt controlled and focused, and this is part of what lends the fable or even fairy tale sensibility to the story. I personally wouldn’t change a thing.

So, yes, the book is very deep. But it’s also just inventive fun. You can read it as a coming-of-age adventure with great characters in a cool setting and leave it as that—you won’t be disappointed. Or you can dig into some of the meanings layered throughout the narrative and be thoroughly pleased with the way the material engages you on that level, some of which I’ve touched upon above. Utomi has a knack for storytelling, an enviable imagination, and a thoughtful approach to writing something which is actually important. Better yet, where he takes the story in the climax is just … brilliant.

This one is highly recommended. Get your copy and enjoy!