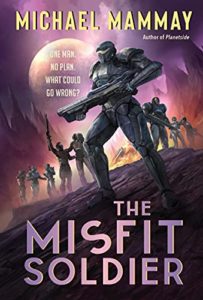 Salutations, readers, and welcome to a new year, along with a new book review. This month we’ll be looking at The Misfit Soldier, by Michael Mammay, which is a twisting roller-coaster of a ride that always reaches for the unexpected.

Like Mammay’s other books, The Misfit Soldier fits most easily into the military SF genre, but where his Planetside series felt more like detective thrillers, this particular book feels like a heist movie that happens to feature power armor and exploding dropships, along with a squad of not quite perfect soldiers led by a wise-cracking protagonist whose plans never seem to go the way he wants.

The book starts with that protagonist, Sergeant Gastovsky (‘Gas’ to his friends, and most of his enemies), attempting to find a way down to the surface of the planet he just left in order to rescue a squad member the team was forced to leave behind, and without giving away any spoilers, I really enjoyed how Mammay was able to throw me for a loop right off the bat. He does an excellent job establishing Gas’ character by leaning on some familiar tropes, then immediately turns those around to play with the reader’s expectations. I’ve read a lot of books over the years, and what stood out to me about this story is that Mammy kept taking it in a different direction than I expected, which kept the story interesting and fresh the entire way through. There were multiple times I thought I had correctly predicted what was going to happen next, only to find another curveball thrown into my path (mirroring the constant derailing of Gas’ schemes).

Another aspect of The Misfit Soldier that stood out to me was the care with which Mammay built the relationships between the various characters, and how they grew and shifted over time. It would have been very easy to paint them as one-dimensional caricatures of well-known tropes, but Mammy puts in the time and effort to flesh out their flaws and virtues, and it kept me invested in the fate of the squad the entire way through—no easy task given the amount of characters involved. While Gas is the primary focus around which the story revolves, the rest of the squad definitely felt like they had their own motivations and desires, and were never there as props or filling. There’s even a believable romance arc that feels like it naturally evolves (which is incredibly tough to write, believe me).

The part of the book that I think really hits hardest, though, is Mammay’s underlying theme of the individual versus the institution (one he’s touched on previously in the Planetside series, but here explores in much greater detail). Gas and the members of his squad are more than willing to die to save each other, but why are they out there dying to begin with? Mammay does a fantastic job setting up the camaraderie of the group in lots of little ways (drawing heavily, I suspect, from his own experiences), but it’s a camaraderie built out of individual bonds, not a greater devotion to what might be a meaningless war (again, I suspect drawing heavily from his own experiences), and it begs the question of whether or not an institution considered vital is worth keeping if it treats its people as disposable. Should we be content to follow the rules, because those are the rules, even if we know the outcome of following those rules is wrong? It’s a question always worth asking, and I appreciate that Mammay was willing to do so.

Overall, The Misfit Soldier is an action-packed, engrossing read that has just enough military sci-fi trappings to dress the set, but the far more interesting action is what takes place between the characters on that set as they seek out a place to survive. You don’t have to be a fan of space marines to enjoy this book (though their power armor is pretty cool), and Mammay has shown obvious growth as an author, with this being his most intriguing work yet. I hope he keeps writing for many years to come, and I wouldn’t mind at all if we got to hang out with Gas and the crew in a sequel.

Read if: You’re still upset Science hasn’t created a hoverboard yet (c’mon, Science); you’d let Putty date your sister; sometimes it really can only be solved with a match and some moxie.