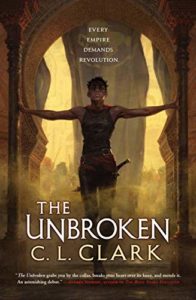 It feels to me as of late that there’s been a good number of fantasy works coming out that explore the nature of colonization from the oppressed minority’s point of view. The latest of these is The Unbroken by C.L. Clark.

Touraine is a Qazāli soldier who had been conscripted as a child for the Balladaire empire. Now her unit is escorting the Balladairan princess, Luca Ancier, back to El-Wast, the capital city of Qazāl’ and Touraine’s home city, which she has no memory of, thanks to the brutal upbring she endured that strove to erase her ethnicity, her culture, and even her language. Before the unit ventures far, a group of Qazāli rebels attempt to kidnap the princess. Touraine foils their plans, but as they are being executed, one of them calls her by her old name. Stunned, Touraine realizes that while she doesn’t remember El-Wast, there are people here who definitely remember her.

Meanwhile, Princess Luca is torn. She is well aware that the Qazāli are badly treated and wishes to give them a better life under her rule. But many Balladairans in power view the Qazāli as “Sands,” uncivilized, childlike and requiring harsh discipline—particularly her uncle, whom Luca is trying to dethrone. When Touraine finds herself in a situation that threatens her life, Luca rescues Touraine and recruits her to be her go-between to the Qazāli rebels to negotiate for peace. She also instructs Touraine to spy on their activities, something that becomes harder for Touraine when she learns that she shares a personal connection with one of the rebel leaders.

The Unbroken is a wonderful fantasy looking at colonialism and racism through the lens of two women caught in its crosshairs. Touraine is stuck between two worlds that will not accept her: The Qazāli see her as a Balladairan-wannabe, policing her own people, while the Balladairans look down on her. She deals with humiliations daily, from her fellow Balladairan officer constantly undermining her to her captain demanding absolute perfection and loyalty to the Balladaire empire. To rebel, or even show sympathy to her own people, invites death. So she has to swallow her pride and walk the line between the condescending Balladairans, who see her as less than themselves, and the distrustful Qazāli, who are willing to kill her for being on the wrong side. As she recovers more of her lost heritage and witnesses the injustices against her people, it becomes harder for her to walk that line.

To further complicate matters, Clark introduces a queer element to all this. Touraine has an intimate relationship with one of her soldiers, Pruett; has complicated feelings for Cantic; and, once she becomes Luca’s assistant, begins to have romantic feelings for her as well. This brings out an interesting dynamic in power roles. Luca, as Touraine’s superior, wants to help Touraine and her people, but how much of that is attraction due to Luca’s loneliness? How does benevolence play in the matter? There was something a bit squicky about Luca teaching Touraine her own language, a language that had been beaten out of Touraine as a child by Balladairan soldiers. Another thing to consider: Luca is disabled with a lame leg. Luca presses Touraine to bring her information about Qazāli magic, which includes healing properties. However, the Balladaire empire banned magic and religious faith. What crosses the line between Luca’s genuine attraction towards Touraine and her push to make Touraine dig up forbidden secrets that would be a death warrant to her own people?

Somehow, Clark managed to turn something squirm-inducing into a complex romance that kept me engaged in seeing how everything turns out. I liked that Clark didn’t rely on simple tropes about who was good or evil, but showed how everyone would do anything for their own interests and goals. And Clark does not shy away from showing how attraction works best when both partners can treat each other as equals; otherwise, it could easily break down into bitterness, betrayal, and hate.