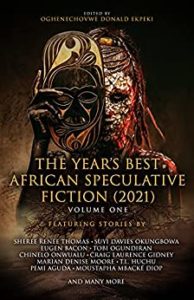 The fact that notable author and editor Oghenechovwe Donald Ekpeki has published the first ever The Year’s Best African Speculative Fiction via Jembefola Press, a press he created, speaks to the glaring problems in the publishing industry. His anthology Dominion, co-edited with Zelda Knight and published by Knight’s small press Aurelia Leo—funded through Kickstarter by enthusiastic peers and readers—was a finalist for a This Is Horror Award, a British Fantasy Award, and a Locus Award; stories from Dominion were on finalist lists for the Nommo Awards, the Sturgeon Award, the British Science Fiction Awards, and the Nebula Awards; and four Dominion stories appeared on the 2020 Locus Recommended Reading list. Just imagine where Dominion could have gone with money from a big publishing house and a marketing team. These accolades are tremendous testament not only to Knight’s and Ekpeki’s taste, but to their willingness to put in the (tedious and often unrewarding) work behind the scenes.

In a better world, it would have been easy for Ekpeki to land a solid book deal for this Year’s Best, and agents would be DMing him on Twitter, asking him what he might want to work on, what kinds of ideas excite him.

This isn’t to say that Ekpeki tried to get a book deal and failed—I have no idea, and can’t speak to that. I do know that if I were putting together an equivalent book of some kind, I’d be skeptical about the usefulness of expending energy in a possibly futile effort to sell a book to an industry which still demonstrates a lack of interest in meaningful inclusivity. I also know that as heartbreaking as publishing can be for pretty much most people who take their shot, it tends to be even more heartbreaking for Black creators: their voices are regularly shot down, watered down, or misunderstood; they tend to be paid less than white counterparts; and publicity teams often leave them in the cold, focusing instead on white authors.

Friends, just . . . go online (bit.ly/38D6wXm) and look at the table of contents for The Year’s Best African Speculative Fiction! If you love short fiction and don’t recognize at least half the authors listed here (and feel an accompanying sense of excitement in seeing them all in one place!) then this is a sign that you aren’t reading broadly enough. Good news: here’s an anthology which can help; Ekpeki has curated an excellent set of pieces for you. If you don’t know who these folks are? Don’t panic. Get this book and start reading. Ekpeki will set you right.

There are too many good stories to cover in the space of this column, but I’ll touch on a few favorites.

Somto O. Ihezue’s “Where You Go” opens the anthology. Originally published in Omenana, it’s a complex story with several overlapping parts and themes—including variations on family and the idea of one’s people, all of which speaks to the meaning of belonging. On one level, it’s a cool mix of great speculative elements, with bursts of striking imagery. More important is the underlying narrative of resilience and the subtler discussion of how entire groups of people can be brought to extinction while no one notices. Finally, it’s a tale of loss, and of a woman who would stand up to an ancient god.

Russell Nichols’s “Giant Steps,” originally published in Lightspeed, is, simply put, superb. Dr. Jenkins is on a trip to Saturn’s largest moon, Titan. Jenkins is making history, and at the same time, she is flying toward the culmination of a life of dreaming and planning. Threaded through this narrative are memories of important events which brought Jenkins to this moment, each memory resonant with the moments of the voyage of the main narrative. Through memories, the story explores disillusionment, as well as the need for belonging pushing against a drive for independence; this plus the effects of Othering, and the pressures, external and internal, arising from ideas around gender and race. The prose is sometimes rhythmic and fairly poetic, the power of the language used throughout the story multiplying the effect of the narrative itself. This piece is nothing less than mastery.

Makena Onjerika’s “Disassembly,” originally published in Fireside, from first arresting line to final moment, is a beautiful exercise in the abstract rendered literal, executed to wonderful effect. The writing is gorgeous. The moods and moments are exquisite. As each passage startles, it also clarifies, and pulls the reader into an inner turmoil which, in the hands of lesser writers, would likely (and, let’s face it, often does) descend to maudlin self-indulgence. It’s a breathtaking meditation on depression, cleverly crafted into a brief journey, and it’s absolutely brilliant.

“The Front Line” by WC Dunlap was originally published in Breathe Fiyah, “a flash fiction collaboration between Fiyah Magazine and Tor.com.” The style is frank and flows well. But more than this, Dunlap demonstrates how much can be accomplished in the span of a thousand words. A slick narrative about a woman with her own problems using a power she didn’t ask for is limned with commentary on class, gender, race, body, and more, while still landing a great primary narrative. Dunlap does nothing less than raise the bar for flash fiction.

Finally, what for me is the most powerful story of 2020, period: “And This Is How to Stay Alive” by Shingai Njeri Kagunda. The story sounds simple: Baraka commits suicide. His sister Kabi is presented with something which may be a chance to change what happened. Kagunda, however, infuses into the story layers of elegant subtext and commentary, and steeps everything in perfect emotional depth. Kagunda takes it a step further, adding a note of intellectual curiosity, interrogating concepts of time, while also occasionally delivering really great lines. The family complications are wonderful; and even Baraka, a character who is only minimally present, is skillfully rendered as a lovely character, making the event of his death even more potent. Honestly, there’s so much to this complex story that it can’t be adequately discussed in this space.

Full disclosure: “And This Is How to Stay Alive” was originally published in the November issue of Fantasy Magazine, which is run by Christie Yant and yours truly. I was bawling through the initial read in slush, bawling through reading it again for our editorial decision session, and bawling yet again, even after reading it a handful of times, when going through the text for edits. I can’t think of a single story which has had that kind of impact on me; and being brought to actual tears at all (let alone full blown ugly crying) is not that common.

If these aren’t “your stories,” you are bound to be wonderstruck by the combined powers of Tobi Ogundirun, Tlotlo Tsamaase, Craig Laurance Gidney, Sheree Renée Thomas, T.L. Huchu, Tobias S. Buckell, ’Pemi Aguda, and the many other skilled storytellers in this book. This is an absolute “Must Have” for anyone who enjoys short fiction.