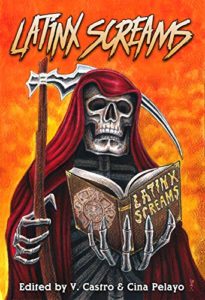 The 1980s and 1990s were in some ways the heyday of horror anthologies, arguably riding the rising tide of horror cinema’s popularity. Movies Halloween and Dawn of the Dead shocked and delighted fans in 1978; memorable anthologies such as Kirby McAuley’s Dark Forces came out in 1980, Ramsey Campbell’s New Terrors in 1982, not to mention Alan Ryan’s Night Visions in 1984, starting one of the more important horror anthology series—these are just a few of a great many memorable titles of the era. In fact, the HWA (Horror Writers Association) was founded in 1985.

As someone who collected and devoured those anthologies, who still has many of them on his bookshelf, I say with certainty that the tone and vibe and even structure of many of the stories in Latinx Screams hearkens back to that era. This is a book chock full of solid horror tales which could easily appear in classic but notable horror anthologies, such as Douglas E. Winter’s Prime Evil or Dennis Etchison’s Cutting Edge. It makes a certain kind of sense, as many horror writers will have grown up reading those books, and they will undoubtedly have DNA from those stories in their fiction. One glaring difference between this title and those, however, is that back then—aside from occasional outliers such as 1998’s Women of Darkness edited by Kathryn Ptacek—the bulk of stories in horror anthologies of that so-called heyday were by authors who are both male and white.

In fact, in the editor’s note, V. Castro talks about reading Alvin Schwartz’s 1981 anthology Scary Stories to Tell in the Dark, saying “Back then I never thought I could or would write horror . . . I didn’t know of any Brown women delving into the depths of the dark corners of storytelling.” Arguably, the real heyday is now, with the publication of books such as this one, offering good fiction from a set of perspectives which (for whatever sets of reasons) had largely been missing from those iconic books of the ’80s and ’90s.

Latinx Screams opens with “Sangre Derramada” by Hector Acosta which, for me, hints at an anthology called Splatterpunks, edited by Paul M. Sammon in 1990. That book was all about violence and blood, and this story is all about blood and claustrophobia. Alberto is sent to a chicken killing facility to look into why a finger ended up in a package of chicken. The opening hints at a tale along the lines of Stephen King’s 1978 classic “The Mangler,” being heavily focused on the imposing presence of sharp machinery. Toxic machoism and barely controlled violence take center stage. What makes this piece interesting is subtext on class, and the way everything swivels away from the expected direction and into a narrative about cultural anger and capitalist exploitation.

“Black Sheep” by Sarah Davis introduces Anessa, a journalist who is tasked to investigate a mysterious individual who beats up seemingly random people and leaves them with their head shaved. The story is a device to explore the difficulties of growing up with a mixed identity, and touches on race, class, and the fakery of “good neighborhoods.”

Rios de la Luz’s “Morning of the Teeth” is driven by imagery, discombobulating moments, and ideas. On the surface, it’s about an exorcism, but at heart it’s a discussion of men of violence and abuse of power.

In Arasibo Campeche’s “The Organometallic God” a woman finds herself aware but in a state of severe decay, and unable to move. It reads as something of a thought piece, specifically as a meditation on human nature, existence, and faith.

“Come, Play” by Sergio Gomez stands among my favorites in this book, as a great example of atmospheric horror. Two kids go out at night in search of frogs and find something sinister down by the creek. The ending is expected, but the story is still enjoyable, carried – as it should be – by creepy moments, and it’s overall well-told.

“Frijoles” by Laura Diaz de Arce is a great tale of a family curse and a young woman who tries her best to defy it. At a family gathering Blanca discovers that everyone in their family dies at a certain age. In Blanca’s attempt to resist the curse, the narrative becomes a wonderful way to explore the feeling of being at odds with one’s cultural identity, as well as ideas around class struggle. The story is grounded by a sense of family, history, and its importance to the main character, despite her best attempts to free herself from them.

“Galán” by Richie Narvaez is a robot story we’ve seen before, but we haven’t quite seen it done in this way. Jazzmin gets the robot she was promised – all the kids have them. And at first the robot is quite helpful. Meanwhile, the entire family struggles to come to terms with the dad’s mother and her antiquated (read: conservative) points of view. What happens next is perhaps predictable but nonetheless fun. What makes the story more important than otherwise is the exploration of cultural retention, which is a fresher topic perhaps than the still quite important generational clash. It’s a good take on a trope or two, and it plays out the way it should.

Latinx Screams features twelve original stories in all. These are just a few examples of what’s on offer, including some of the standouts. Not every story is speculative. Some of them hinge on a reveal or sketch out an idea rather than fully fleshing out the narrative. But this book is still a worthy addition to any horror reader’s library. Having the commonality of Latinx authorship to shine a light on people who have been underrepresented for decades in the horror industry is important, but it isn’t the sole reason to get this book. I said at the start that these stories brought me back to those ’80s and ’90s anthologies in terms of structure and vibe. But the stories also do things just a bit better: most, possibly all of them go beyond the basic expectation of a fun horror piece; narratives are layered with meaning, social commentary, and personal authenticity. After reading this book, the truth becomes obvious: stories from perspectives such as these should have been a celebrated part of the fabric of our horror culture all along.