Book Review: To Shape a Dragon’s Breath, by Moniquill Blackgoose 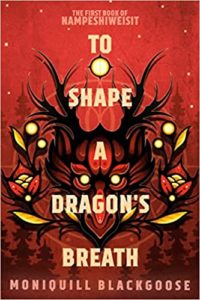 In Moniquill Blackgoose’s novel, To Shape a Dragon’s Breath, a young Indigenous woman, Anequs, finds a dragon hatchling and bonds with it on the remote island of Masquapaug. In this land, the Anglish conquerors have a strict law about dragons and how they should be raised. Dragons and the people they bond with must go to the Anglish mainland and enroll in dragon school. Anequs must leave her home and family to raise the dragon, Kasaqua, and save it from being killed for not being adequately trained.

The fantasy and wonder of To Shape a Dragon’s Breath started immediately. But it didn’t feel like I was thrown into the story; more like I was joining characters and a world that existed without me. To Shape a Dragon’s Breath didn’t feel like there was an on-ramp to the world or culture. It would have been difficult in many books, but Blackgoose crafted a deep culture, society, and world that felt engaging to follow.

What first piqued my interest when I cracked open my advance copy were the chapter titles. Each one was descriptive of the events in the chapter while adding a lovely poetry and rhythm to the transitions between chapters. The descriptive titles gave each event an even more matter-of-fact or historical feel: THIS IS WHAT HAPPENED HERE, and THIS IS WHAT WAS SAID HERE.

To Shape a Dragon’s Breath is awash in themes of colonization and erasure. The way Anequs’ family and home see her bond with Kasaqua is almost in total opposition to the laws they are forced to abide by throughout the book. Anequs’ journey learning how to better bond with and understand her dragon grapples with these implications in genuine ways as she is one of the only Indigenous people enrolled in the Anglish dragon school.

Along with all the themes surrounding colonization and racism is the heartfelt and touching relationship between Anequs and her dragon Kasaqua. I caught myself more than once settling into warm feelings of following a character as they embarked on a wonderous learning journey. Blackgoose balances Anequs’s emotions of being in a world that treats her less than with her fight and willingness to do what’s right for those she cares about.