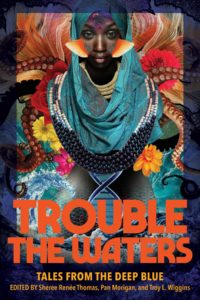 When I think of Sheree Renée Thomas, what first comes to mind is her set of groundbreaking anthologies: Dark Matter: A Century of Speculative Fiction from the African Diaspora (published in 2000), Dark Matter: Reading the Bones (2004) and later, the special issue of Illinois State University journal Obsidian, “Speculating Futures: Black Imagination & the Arts” (2016; co-edited with Nisi Shawl, Isiah Lavender III, and Krista Franklin). Dark Matter was a New York Times Notable Book of the Year, and both Dark Matters won World Fantasy Awards, making Thomas the first Black World Fantasy Award winner. All three books are wonderful, and any serious short fiction aficionado should include these in their library. Added to her many accolades, she also recently took over as editor of The Magazine of Fantasy and Science Fiction.

Seeing Sheree’s name as an editor on a project immediately gets my attention. Add to this the editorial perspective of Troy L. Wiggins, who was editor at the outstanding FIYAH Magazine (before passing the role to DaVaun Sanders; Wiggins is still publisher); and Pan Morigan, who was previously unknown to me, but has a long and fascinating multi-disciplinary list of credentials (such as “recipient of a Massachusetts Cultural Council Fellowship in music composition” and “grants with Chrysalis Theater from the Ford Foundation and the NEA to produce Chrysalis Theater’s inter-cultural, multi-disciplinary theater works”), and I had to give this book a look.

If this isn’t enough – and it should be – a glance at the table of contents reveals gems from legendary authors Nalo Hopkinson and Linda Addison, acclaimed authors Andrea Hairston and Maurice Broaddus, and many other respected genre folks, such as Christopher Caldwell, Marie Vibbert, Kate Heartfield, and more. What I learned about Sheree during our interview for Locus Magazine (bit.ly/3ltV1bo) is that she isn’t simply a genre writer; she’s an individual who moves in many circles, whose interactions with various artistic communities go well beyond genre. This speaks to her partnership here with Morigan, but it also means that the table of contents offers a host of authors who aren’t “the usual suspects.” In other words, these three editors have gathered excellent work from writers many SFF anthologists and readers probably don’t know about, and probably haven’t read. In doing so, they expand the SFF field, and they simultaneously bring fantastic writers into the field who might not otherwise be here.

Elle L. Littlefield’s “Mississippi Medusa” opens with a great voice, capturing a touch of that oral storytelling feel. Cool, vivid, but not overwrought imagery, filigreed by perfect little details, sells the moment. At the same time, the story edges into lovely “larger than life” territory. The style is an effective combination of dialect and literary flair with horror notes. Littlefield’s narrative sketches family and community nicely, while delving into the way people respond to the strange. In this case, “strange” is a newborn who resembles a snake.

“The Sea Devil” by Susana Morris uses the speculative to examine otherness, in particular an otherness which is felt sharply and irrevocably. Protagonist Gem feels this otherness: she is different from the people currently around her; but she finds comfort and power in this difference. She is glad to be unlike those around her. She respects the decision of her sister Akira to live with people who are unlike them, even if it’s a decision she doesn’t entirely understand. For Gem’s part, she’s on a mission of vengeance, and once it’s complete, she can’t wait to get back home. It’s a well-told story which is on the one hand about being who you are and what that means, and on the other hand, about standing adamantly against violence, specifically domestic abuse – while also speaking to the nature of violence and power in the framework of society and history.

Jamey Hatley’s “Spirits Don’t Cross Over ’Til They Do” opens on a scene reminiscent of some of the best shows and movies about warfare, but the story itself is far more thoughtful and interesting than those productions tend to be. Rabbit Grace is on his second tour of Vietnam. The initial scene captures that camaraderie of military boys, the banter and the vibe, making expert use of dialogue. From there the story becomes a character study of sorts: Rabbit is a young man changed by the war, but changed in strange, subtle ways which he doesn’t really understand himself. He remembers being whole, once, and feeling love; and now, he is unmoored. At first, the narrative is a deft, understated exploration of trauma and loss. A sneaky momentum builds through the read, dragging the reader into emotional depths and intensity, until everything culminates in a truly thought-provoking ending. It’s… different, and kind of incredible.

“Call the Water” by adrienne maree brown grabs you from the outset with captivating storytelling, both in delivery of lines and its intriguing characters. The opening moments, the story set-up, is nothing less than a punch in the chest – if you have feelings or any sense of empathy, anyways. Added to this is the brilliant way brown lends meaning and gravity to something incredibly simple; how the meaning is layered, and how it feels both personal and important beyond oneself. The story is heavily, unapologetically political, speaking against systems which deny essentials to the already underprivileged. It’s a clear polemic against greed, bad politics, and even those who thoughtlessly play along. In the near future of the story, vulnerable communities in Detroit (and indeed around the country) are left without working water for extended periods, due not only to a catastrophic event, but also due to privatization of what water remains and subsequent price hikes. Protagonist sinti might be able to do something about it, but she’s not sure about her power, and she’s not sure about the consequences. You may read this piece and think the premise is a bit far-fetched, but you’d be wrong: a similar real-life situation happened in Detroit, leaving people who couldn’t afford the rates without water for extended periods. Yes, folks: this is now, this is today, this is your America. brown’s story works very well, not only as political commentary, but also as a depiction of sinti’s personal journey to empowerment. Ultimately, this story is about how power rests in decision. sinti finds her way to making her decision; by implication, we are on our own journeys, and must decide if we are willing to do what it takes to help our neighbors. Really well done.

One of my favorites of the book is definitely Jasmine Wade’s “All of Us Are She.” When reviewing, I write notes as I read, and my notes for this one are… extensive. The narrative is immediately intriguing, tying American history (slavery) to personal history smoothly. The voice is confident but relatable, and the story makes wonderful use of the framework of a grandmother telling a story. Thoughtful details lend this a realness – I was brought back to my mom and my grandma telling stories. This realness is important, because it effectively builds plausibility in the tale as well as investment in the reader. Wade draws striking parallels between contemporary and colonial power dynamics: the way people wield power, dehumanize people, and use people, all without self-examination. Meanwhile, throughout all of this, it’s also a powerful story about belonging, and doing so in defiance of those who would control you in one way or another. We get this story through the journey of the protagonist, who has to come to terms with who she really is, as well as with the ways she has rejected who she is in the struggle to feel comfortable with the people around her. As she discovers herself, she also uncovers truths about her mother (look: this is layered parallels in story, folks – there’s a lot of skill on display here), and the transitions and struggles she had. In a way, there is an illustration of the ways (white) society gets people of color to reject family and culture and even self. The way the things someone says can get inside you, even when you know better. One of the highlights of this theme is the idea of “suspect” family stories: those tales told by parents and uncles and grandparents and aunts that (if your family is anything like mine) you eventually feel couldn’t have possibly happened. But ultimately, Wade’s story is a metaphor for rejecting the pain and frustration of a society which really doesn’t care for you. Finding peace and power of place in your imperfect, flawed, amazing family; and becoming who you really are. It’s absolutely brilliant.

If you want some wonderful tales, gathered together by a team of editors who clearly know what they’re doing, go get this book. Spend some time with these pieces, sit with them. The work on offer deserves your thoughtful attention.