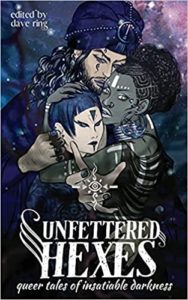 In the December 2020 issue of Lightspeed, I reviewed Glitter + Ashes, and in the August 2021 Lightspeed, I reviewed We’re Here. I swear I’m not besties with publisher dave ring or anything. The fact that I get to pick a book a month to review, and that this is the third time I’ve felt a Neon Hemlock title needs to have this spot, speaks to what they are doing as a publishing company.

Unfettered Hexes begins with a striking cover by Robin Ha, which effectively telegraphs the theme and vibe of the anthology: smart, creative, inclusive, a bit dark, and at least a little bit wild (in the best possible of ways). Art is not a perfunctory exercise with this book. Rather, it’s thoughtful, and feels as important as the written work. Interior illustrations by Frances P. make wonderful use of color to create an immediate impression that this book is something special. Writings are preceded by Matthew Spencer’s black and white illustrations, which are evocative and, quite often, just perfect. Finally, illustrators Grace P. Fong and Caleb Hosalla contribute lovely graphic stories, “The End of the Line” and “Talalora” respectively.

Unfettered Hexes is a luxurious tasting menu of great fiction, sometimes sensual, sometimes shocking, sometimes absorbing, and as a composed offering, impressive. Like any great banquet, it begins with an amuse bouche. The first piece of writing is a poem by Imani Sims, “The Underworld as a Heart Meditation.” This is a brief entry which demonstrates the power of well-chosen words; and does exactly what an amuse bouche is meant to do: get you excited for what’s to come.

Several courses stood out for me. “FOR CLOSURE” by Tania Chen is a gently engrossing, delightfully strange tale about a young boy tagging along with his dad as he considers buying a house. The details of the story create a sense of moment, of a distinct narrative. There’s a dash of subtext about the way certain kinds of men move through the world, and the encounter with the uncanny is seasoned with just the right amount of uncertainty.

“Antelope Brothers” by Craig L. Gidney draws you in with an easy but interesting interiority, and a touch of relatable otherness–not to mention a smooth narrative voice. Cool details are liberally sprinkled in like treats for the dark-hearted. By the time the encounter with the strange happens (which is also really interesting), you’re in so deep you’re going to see this story through. Notes on exotification and specific kinds of othering develop a sharp sense of isolation, which sets up the ending as a sexually charged climax cum empowerment (all puns absolutely intended). The end result is a feeling of finding something like belonging.

Kel Coleman’s “Before, After, and the Space Between” is a skillful rendering of a complex love between mother and child. The narrative is initially grounded in this complexity by a handful of incredibly effective lines. This foundation allows Coleman to build an imaginative world, described through dual timelines, while still delivering an emotionally resonant story. The interpersonal conflict is one of several layers, which includes subtext around the ways oppressive systems convince the people they oppress that it’s okay to accept less, to be less, or to participate in those systems of oppression. This story is also about the fact that sometimes we have to find our own way to our own perspectives on truth, even if the people who love us are in a hurry to see us get there. All of this, executed with lovely prose and a fascinating voice—very well done, indeed.

“The Passing of Sinclair Manor, or, The House of Magical Negroes” by Danny Lore is a must-read. It’s the first story in the book, and for good reason: it embodies all the fight, swagger, and depth of storytelling you might want in an opening piece, letting the reader know they are in for an awesome ride. Carter Graves has returned home, late for a family funeral, of a family that has pretty much died out, in a place where any sense of belonging is . . . complicated. The white people can’t stand the fact that it isn’t their manor looming over the town, and of course, over years and generations, they have gone to (and will continue to go to) desperate and evil lengths to change that. But this isn’t the only reason Carter left all those years ago. And now that Carter is back, not only are there decisions to be made, but old, racist rivals are eager to finish what they started. Unfortunately for them, Carter isn’t the type to back down from a fight. Carter also comes armed with the mysterious magic of a strange house and an estranged family. Look, this story has attitude, and I love it. It’s also a piercing piece about being at odds with family, while being even more at odds with the world. Finally, it’s about survival, resilience, and resisting the eroding effects of the constant abuse of power, which is just one of the many expressions of racism.

Perhaps my favorite story was Suzan Palumbo’s “The Bride.” Lovely prose and a few really great lines add to the mood and overall personality of a story which, ultimately, utilizes brilliant but sly characterization and deft emotionality. Alice likes being independent, despite the pressure from people around her to find a husband. In yummy irony, she makes wedding dresses for a living, and she’s damn good at it. One night, she sees something on the side of the road, perhaps “someone,” who is clothed in a gorgeous shimmering dress. Not long after, bad men start dying mysterious deaths, even as Alice feels drawn to find the ominous figure she’d glimpsed before. It’s a familiar and fun kind of horror story, yes. But Palumbo demonstrates the life an author can breathe into a story through depth of character and meaning of narrative. This piece isn’t just about loneliness; it’s about uniqueness, and not quite being seen, not quite being accepted. Finally, it’s kind of a story about finding your place in the world, told through a horror lens.

These don’t have to be your favorite stories. ring’s tasting menu is bound to please a range of discerning readers, especially those hungry for something with substance. The tales here are fun, and often delectably dark, but they are also fulfilling. Frances P. finishes the meal with two more illustrations, like colorful pops of refreshing sorbet, cleansing the palate and leaving a light, lingering impression, one which lasts long after you’ve closed the book. If you sample some of this fare, you will definitely come back for more.