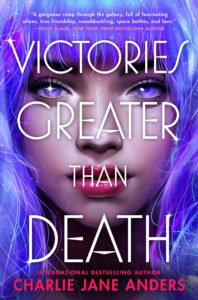 It’s been a while since I read something fun. Something joyous. Charlie Jane Anders’ first venture into the YA genre, Victories Greater Than Death, did not disappoint me in that regard. It held the same freewheeling drama as Jim C. Hines’s Janitors of the Apocalypse space-opera series flavored with the sparkly pop-candy love and concern of Steven Universe.

All her life, Tina knew she had a destiny. She may look human, but in reality she’s a clone of Thaoh Argentian, captain of the alien spaceship HMSS Indomitable. She was placed on Earth by her former crew to hide her from murderous enemies until she was old enough to activate the beacon inside her body. When she finally does so, her old crew comes looking for her—as well as Marrant, a skeletal alien who commands a war-mongering force called the Compassion. This is because Tina’s predecessor may have known the location of the Talgan stone, a relic that points the way to unknown alien technology. Marrant plans to wrest the information out of Tina before not only killing her, but also tainting her memory, and by proxy that of Thaoh Argentian, so that anyone who remembers her, friends or family, would only do so with loathing and disgust.

Soon, Tina realizes her destiny may be too big for her to fulfill, particularly when going through her original’s journals, she learns a secret that calls into question her own identity and purpose. At the same time, while trying to fulfill the expectations of her former crew, she’s trying to manage a team of Earthlings, including her best friend Rachel, who’s an amazing graphic designer, and Eliza, a hacker girl she falls for who is dealing with her own demons.

This is a book of absolute joy. What I love about the YA genre is that you get to experience things from the POV of someone who has never experienced it before. Anders’ characters are free to gush and emote, but they also wrestle with their insecurities and doubts. To someone as jaded as me, it’s a great reminder of how I used to be, how I used to approach life before being disappointed. Even the ones who are world-weary can’t help but get caught up in the joyful moments, brief as they are. Woven through the story are also people and aliens caring for each other.

I’ve always admired Anders’ handling of relationships, all the heart-pounding highs and messy lows. Most of the aliens—the good ones anyway—greet each other by giving their pronouns, and the HMSS Indomitable crew ask for consent before touching each other. Anders has populated the alien crew with such grand diversity (sentient rocks, the aforementioned skeleton species), yet most of the story is focused on Tina and the humans she has gathered to serve as part of the crew. It was so good, I found myself wanting more interaction with the aliens on board the HMSS Indomitable.

Hopefully we’ll get more of that when the second book of this duology comes out. I want to see more of Tina coming to terms with her destiny, whatever it will be, learning more about her alien heritage and trying to figure out why Marrant hates her so much he is willing to destroy even his own relationships, and perhaps his own soul.