Book Review: We Are Satellites, by Sarah Pinsker 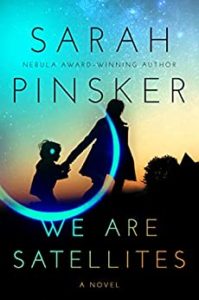 I am multitasking as I write this review. I am typing these words while listening to my husband talk on the phone while I’m also listening to lo-fi on YouTube. If I really wanted to, I would be knitting as well as playing a game of Candy Crush (which I switch over to far more than I should). I can blame this on the nature of this world where attention spans are shorter, how easily we can be distracted by the ping of phone notifications of email and social media. Ah, if there was only a way to focus our attention easier, or better yet, find a way to use multi-tasking to its full potential.

Sarah Pinsker comes up with a way in her latest book We are Satellites, but with it she also asks the question, “Is using multi-tasking software a good thing?”

A new technology is sweeping the country called Pilot, an implant that allows you to multitask more efficiently. High schooler David tries to convince his mothers, Val and Julie, to allow him to get one so he could concentrate better at school. Tech-savvy Julie is fine with it, but Val is leery. She worries that the push for this implant would mean that those who are unable to get it, such as Sophie, their youngest daughter with epilepsy, would be left behind. Ultimately though, they agree to let David get the implant—and further in time, Julie also gets one.

The story is a quiet, detailed look at how technology changes a family over a span of decades. David struggles with his implant—unlike most of the kids in his class who are able to tune out distractions, he is one of the few where everything around him is put in hyperfocus. However, when he tries to explain to people: his parents, his friends, his doctor, they dismiss the problem, or they don’t know what to do. Afraid that admitting the problem would mean the Pilot being taken away from him, David struggles with failure and hides his condition. Sophie, on the other side, deals with being bullied and called names by those who have the implant, and as she grows older, she fights back by joining an activist group protesting the Pilots. As parents, Val and Julie find themselves trying to hold their family together, but also falling on opposite sides of the issue. Which means in order not to hurt the other, they hold back little things from each other. Concerns, worries, observations—little things that by themselves aren’t bad, but over time can pile up into overall lack of trust.

And trust is the true heart of We are Satellites. For all its faults, the implant does what it’s supposed to. It’s just a tool. But as with all technology, it changes how people relate to each other. Pinsker does an excellent job of presenting the turmoil of the implant impacts relationships between spouse and children, spouses with each other, siblings, the world, the haves and have nots, the disabled, the privileged. I found myself shaking my head at the choices the characters made, but on further reflection found myself wondering if I would react the same way. Like technology, trust is a tool that needs to be exercised just as much, and lack of trust, or worse, abuse, can wreak havoc, whether it be corporations that push technology on the public without acknowledging problems, or whether it be between two people who are so afraid of hurting each other that they withhold it, and in doing so, hurt the very people they love.