Book Review: We, by Yevgeny Zamyatin (a new translation by Bela Shayevich) 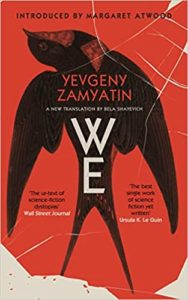 Greetings, readers, and may your fall be festive! It’s time for another book review, and this month we’re looking at a book which is most definitely not festive; We by Russian novelist Yevgeny Zamyatin—one of the earliest modern dystopia stories written, and an inspiration for Brave New World and 1984.

Originally created in 1921, We was the first work banned by the Soviet censorship board, but not for any deliberate parallels to the burgeoning autocracy that Lenin was building (and that Stalin would later finish). What makes We revolutionary is that it foresaw the end result of every autocracy, regardless of supposed creed or ideology, and that’s what makes it relevant and still worth reading even (and perhaps especially) in our modern times.

The structure of the story follows a gifted mathematician, D-503 (in We, every citizen of the One State is only known by a letter and number combination), who is in charge of building an interstellar spacecraft so that the logically perfected happiness of the One State can be spread to other cultures amongst the stars. D-503 is tasked (as is every other citizen) with keeping a journal that glorifies their contributions to the greater whole, and is the lens through which the reader follows his journey. The novel starts with D-503 quite content with his purpose in life, and a staunch adherent to the One State’s creed, but a chance meeting with another subversively attractive citizen, I-330, sends his rigid railway of thought careening out of control.

As is standard for dystopian novels, what seems to be perfection and happiness on the surface is revealed to be anything but as the story progresses, and Shayevich does a fascinating job of translating Zamyatin’s prose in a way that sucks the reader into a highly personal glimpse of a man completely breaking down. The terse and complete sentences of certainty in the early part of the book give way to shattered fragments of bewilderment and despair as D-503 grapples with his new perspective on reality, and the fraying dissonance between what D-503 once believed and what he learns is palpable.

The translation is also wonderfully evocative in its descriptions of people, places, and mental states, without being overly flowery. While reading it, I was able to create a very vivid image of what living in the One State would be like, for better or worse, because despite the obviously science fiction setting, it felt like a real place, populated by real people doing the things that humans have been doing for thousands of years, but believably warped by the consuming pressure of the One State in which they live.

Unlike many other dystopian novels that came after it, ones that lean more on fantastical elements of world building, or absurdities with philosophical positions taken to their illogical extremes, We excels due the reality of its primary philosophical argument, one that readers, with the luxury of being one hundred years removed and aware of the historical events that occurred after its publication, ought to appreciate even more; after all, who doesn’t want a life filled with complete happiness, even if it means giving up individual rights? Surely there would never be a society willing to subsume itself in atrocities against the poor, the weak, or the other in order to maintain a carefree existence for the select chosen, right? Obviously no one would ever hide behind a massive wall in order to keep out the outside world and those deemed savage and unfit? Clearly, if we could just quantify human existence in the proper algorithm, everything would work properly, no?

(I suspect some of you may begin to see the parallels.)

Overall, this is not a book I would recommend you read for fun, or to while away the hours in between waiting for other things to happen. This is a book I recommend you read because it matters, and not just in a way that’s specific to a certain point in time or culture. Zamyatin, speaking to us from one hundred years in the past, still has something very much worth saying, a transcendental argument about the relationship between security and freedom and the cost of each, and it will be an argument worth having until humanity itself ceases to exist. You should check it out.

Read if: You’ve wanted to throw a stone in a world made of glass houses; you’re not scared of irrational numbers; you want to see a man have sex with a chair.