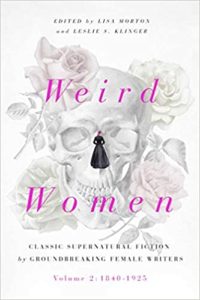 I continue my short story craving by reviewing another anthology this month. This time it’s Weird Women II: Classic Supernatural Fiction by Groundbreaking Female Writers. This is the second feminist anthology I’ve reviewed, the first being The Future is Female in my November 2018 review. Now to lean toward the weird/supernatural side, I’m reviewing Weird Women II, the second volume in a series edited by Lisa Morton and Leslie S. Klinger. These stories are from the period 1840 to 1925, and although they would not be considered scary in modern times, they do provide a glimpse into what was seen as disturbing and unsettling back then.

With most of the authors being white and female, they also come with the biases and prejudices of the time. The most blatant one is “Little White Souls” by Florence Marryat, where a colonel’s wife moves to an isolated palace in India, scoffing at her Indian servants’ fears of a ghost wandering the halls. The protagonist is portrayed as a foolish, mistrustful woman, and her attitude towards her servants is attributed more to her overall foolishness. Still, I found the ghost story, another white woman who had been murdered by her Indian husband, pandered to colonialist fears all too easily.

But while the stories lean more towards the moralistic side, they are also used to call out injustices. “Broken Glass” by Georgia Wood Pangborn has a well-to-do woman being chided by the ghost of a servant for better treatment, while Harriet Beecher Stowe, best known for writing Uncle Tom’s Cabin, uses a Native American and her trances to reveal a crime in her story “The Ghost in the Mill”.

Stowe isn’t the only recognizable name in this anthology. George Eliot’s “The Lifted Veil” is included—a long, drawn-out story about a man who can see into the future but still marries a woman who despises him; Eliot felt the story was too dismal to allow future reprints. On the other hand, Zora Neale Hurston’s “Spunk”, a tale of two men fighting over a woman, was only four pages long and left me wanting more.

Several stories speculate on the afterlife. “Where Their Fire is Not Quenched” by May Sinclair tells the story of a woman who has an affair and finds herself drawn to her lover even after death. Edith Wharton’s “The Fulness of Life” is the opposite—a woman waiting in limbo for her husband, convinced he will join her. Others focus on lost loved ones, such as “The Drowned Fisherman” by Mrs. S. C. Hall or “The Children” by Josephine Daskam Bacon, a particularly haunting tale of a woman and her invisible children.

And some stories are just, well, weird. “The Man with the Nose” by Rhoda Broughton is a cautionary tale of a husband who does not believe that his wife is being haunted by a man with a peculiar nose until it’s too late. “Let Loose” by Mary Cholmondeley—a story of an architect who ignores the warnings from villagers about a crypt he’s investigating—is probably the creepiest story in the entire anthology.

Despite its flaws, I enjoyed reading this collection. I’ll have to look into picking up the first volume so I could get the full experience.