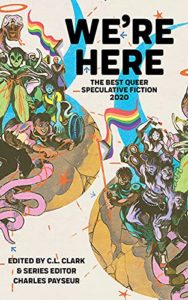 One of the first things I learned in working at Locus Magazine was that there are far more small and independent presses are out there than you think.1 A chunk of them are authors self-publishing with a catchy “publisher” name, or perhaps publishing their friends. A fair number are somewhat indistinguishable from each other: if you set books from these indie presses together on a shelf, you might not be able to tell that they are from different companies (but you could tell that they aren’t from major publishers). Some independent presses publish titles which are, in fact, easily distinguishable from other publishers, but the books from within that press, if placed together on a shelf, might all seem indistinguishable from each other.

Then again, there are many distinctive independent publishers who produce notable books. Quite often, after you’ve read or seen a handful of their titles, you start to get a sense of their literary taste and visual aesthetic. When a title comes in from one of these houses, you can often tell whose book it is at a glance. They might not have the budgets that big houses have, but many of their books are outstanding. Importantly, the presence of their products dramatically improves the quality of the overall body of available literature. In other words, our lives are made richer by the work of independent publishers.2

Newcomer Neon Hemlock, launched by dave ring in 2019, promises to fall into the latter category. They feature gorgeous covers and offer books by intriguing, talented authors, such as Eboni Dunbar, Anya Ow, Premee Mohamed, Shingai Njeri Kagunda, and our own Nightmare Magazine editor Wendy N. Wagner. In the December 2020 issue of Lightspeed I reviewed Neon Hemlock’s anthology Glitter + Ashes—quite favorably; and I would hold that book up as an example of a title which feels distinctive and which improves the offerings of genre.

Which brings me to their latest anthology: We’re Here: The Best Queer Speculative Fiction 2020, by series editor Charles Payseur and guest editor C.L. Clark. By virtue of being a “Year’s Best” (in other words, a reprint anthology), rather than a gathering of original pieces, this book may not be as distinctive or fundamentally transformational in its impact on genre as Glitter + Ashes was, or as upcoming Unfettered Hexes will likely be. All the same, it’s a welcome addition, and does stand as important and unique in the scope of “Year’s Bests,” which are often the takes of various editors on more or less the same subjects. That is to say, there are many kinds of “Year’s Best” science fiction and fantasy books, framed in different ways, with titles adjusted to reflect variation in editorship; but none of them are quite like this one, and many of their editors do not consider queer representation a priority.

Clark and Payseur have selected a solid set of stories, sometimes touching, many of them memorable. Favorites include “Escaping Dr. Markoff” by Gabriela Santiago, which evokes an old-timey silver screen vibe. Characters are named by their type, such as “The Beautiful Daughter” and “The Fiancé.” The main character—“You”—is clearly caught in some sort of strange, fairly dire predicament, and this includes being manipulated by the toxic Dr. Markoff. Part of the predicament involves memory loss. On paper, it’s an idea which would not interest me, and utilizes tactics, such as withholding information from the reader, which I would usually consider weak devices. And yet, in the actual read, this story is immediately gripping. The setting is interesting, and the style is engaging. By the time the conclusion unfolds, the whole piece strikes me as masterful.

In “The Currant Dumas” by L.D. Lewis, Sam is a food journalist in a post-environmental disaster world where food journalism doesn’t really exist anymore. There’s a lovely playfulness in her portrayal, including the way she chases a passion which she is still discovering, and the ways she navigates a range of responses, from curiosity to proprietor Yvette, who says, “ . . . we don’t have room here for anyone who doesn’t work. You’ll do all that writing business on your time, not mine.” Aboard a train which shuttles goods to select surviving colonies, Sam catches the eye of Cirque performer and Magician Layla, who is, of course, full of surprises. As their relationship develops, Sam also pushes forward in creating her own space in the world. There’s a dash of adventure, and the world is pretty cool. But the strength of the story is in the genuine characters, and their interactions, which are grounded in humanness and seasoned with the right amount of awkwardness.

Innocent Chizaram Ilo’s “Rat and Finch Are Friends” is a story about a boy named Izu who is a shapeshifter and who falls for another boy. Izu is punished for his feelings, and the two boys are forced to be separate. Themes of otherness and denial are sharpened by clever utilization of the speculative element, wherein Izu is told to keep his shapeshifting ability a secret, and some members of the family want to erase his ability entirely. It’s a poignant tale with a touching ending.

Naomi Kanakia’s “Everquest” is a painful exploration of dysphoria wherein Gopal discovers freedom and a truer sense of self in playing wood elf character Gayatri. Gopal’s parents are not so understanding, and before long, Gopal has to shut down this joy to perform the role of “responsible adult.” Eventually the game calls, as Gopal’s truer self may be buried, but never really disappeared. It’s a heartfelt story which uses narrative not only to describe external prejudices and pressures, but to also delve into difficult subjects and emotions, including shame and self-loathing. This one deserves a place in more “Year’s Bests.”

“Body, Remember” by Nicasio Andres Reed is lovely, strange, and complex. Jun is on a dig in Ossia, a town “built on the grave of ancient Ossuaria, seven kilometers from the mouth of Vesuvius.” When the volcano buried Pompeii in ash, the people of Ossuaria had time to flee, leaving the ancient city empty. Jun, however, is on site when they open a boathouse which is packed with human bodies preserved by volcanic mud. Worse, Jun hears something in the depths of the boathouse, whispering, the sound rising from the darkness and loneliness. The story itself is about a kind of gentle struggle against the aggressive elements of life. Brilliant but understated lines deliver strong emotions. And, even as events provoke Jun’s reflections, there is a subtle underlying discussion being carried out around the way experiences color judgments and perceptions. Really, this story is a depiction of the constant fight to be yourself, to be who you actually are, and the ways that this fight shifts over time but still exists; the arenas change, and combatants change, but the fight is ongoing. The images of the dead and the internalizations which arise are gorgeous and effective. This one deserves to be read slowly, and to be absorbed as thoughtfully as it is written.

Last month I reviewed Paula Guran’s Far Out, which is not a “Year’s Best” but nearly could be. I commented that the table of contents “reads like the glitterati of queer fiction,” that there were no surprises in terms of what names were listed; but I praised the sources that had been tapped, as Guran had gathered stories which many people likely would not have read. By contrast, the table of contents of We’re Here is more about the up-and-coming authors. These are the folks who have a strong foothold in publishing, a sense of career, but who, for the most part, haven’t achieved the awards and statuses of the folks in Far Out. A notable exception being multiple award-winning Charlie Jane Anders, who appears in both books. On the author end, this book introduces readers to quality fiction by skilled writers whose names may be new(er) to readers; or at least, readers may not have realized just how notable these authors are. On the resource end, there are fewer surprises here than Far Out provided, almost all the stories being available and free to read in a narrower set of online publications.

To my thinking, they are both good books, but they are doing very different things in very different ways. This makes them worthy companions, and great additions to the reading lists of anyone who loves short fiction. Remember what I said at the top? It definitely holds true here: our lives are made richer by the presence of these books.