Book Review: Where The Drowned Girls Go, by Seanan McGuire 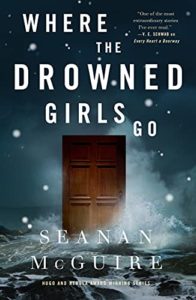 Greetings readers, and happy holidays! Hopefully you’ve received not just what you wanted, but also what you needed, because this month we’ll be taking a look at a book that explores the difference between the two—Where the Drowned Girls Go, by Seanan McGuire.

Where the Drowned Girls Go is another entry in McGuire’s Wayward Children series, which follows the adventures of a group of children who find magical “Doors” that transport them to different fantasy worlds where everything they dream of being comes true. However, no fantasy lasts forever, and as the children are eventually forced to leave their dreams behind, they find that the world they return to has no interest in believing their stories, instead labeling them misfits and outcasts. With nowhere else to go, they are placed in the Home for Wayward Children, a sanctuary of sorts run by Eleanor West, where they can find some measure of understanding about the tribulations they’ve faced.

What’s interesting about Where the Drowned Girls Go, however, is that it doesn’t take place at the Home for Wayward Children. Instead, it introduces a sister school, the Whitethorn Institute, which is most decidedly not welcoming nor understanding (basically, think Pink Floyd’s “Another Brick In The Wall (Part Two)” ramped up to eleven). Where the Home for Wayward Children seeks to acknowledge the traumas the children have endured, the Whitethorn Institute instead looks to bury the past under a veil of sterile banality, and isn’t shy about letting its students know that dissent against their version of reality will not be tolerated.

It is this school that Cora, the protagonist haunted by her experiences in her dream world so much that she can’t sleep through the night, wishes to attend, in a desperate hope that she’ll be able to go back to “normal.” I’m sure you can already see that this is going to be somewhat of a problem.

Now, the reason I put “normal” in quotes there, is that one of the central themes of the book that McGuire explores is that difference between “what someone wants,” versus “what someone needs,” and she does an excellent job in differentiating between the two. The version of “normal” that Cora wants is one where her friends are left behind and the spark that makes her, her, is extinguished, but at the beginning of Where the Drowned Girls Go, Cora’s trauma is so intense that it seems like the right choice to make. Her journey to figure out the difference between what she thinks she wants and what she actually needs in order to feel comfortable in herself is fantastically plotted by McGuire, and the character progression is rich and believable despite the book being closer to novella-length than a novel.

In addition, Cora isn’t the only character who grows and changes over the course of Where the Drowned Girls Go. Despite the perils of the Whitethorn Institute, Cora manages to find new friends there, each of whom has their own problems to work through. It was fun watching McGuire pilot them through a bout of initial antagonism to—if not exactly a harmonious relationship—at least one that sees them gain a measure of understanding and acceptance of each other.

Another thing I appreciated about McGuire’s writing is that despite not having read any of the previous books in the Wayward Children series, I was never lost in terms of the various relationships between the characters in Where the Drowned Girls Go, and I was invested in the story the entire way through. Best of all, it’s given me a new series to check out, and I will for sure be going back to read the previous entries so I can spend some more time in this fascinating world that McGuire has created.

Ultimately, though Where the Drowned Girls Go may seem like a children’s story on the surface, I highly urge you to check it out, because it deals with complex emotional and mental issues that can affect anyone, and does so with dignity and grace. Hopefully McGuire keeps writing this series for a long while to come.

Read if: You’re not afraid to fight The Man; you feel the world needs a little Nonsense; sometimes a bubble bath is the only way to make things make sense and keep the eldritch tentacles away.