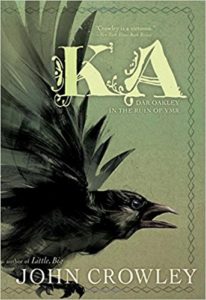 The Nebula Awards finalists have been announced, and it is a strong ballot this year. But as in every year, there’s always that one book that you loved that is notably and inexplicably absent. For me, this year that book is Ka: Dar Oakley in the Ruin of Ymr.

The first time I heard of Ka by John Crowley, it was from someone who had read it in manuscript form. This extremely well-read individual told me that it was among the best books they’d ever read. Ever.

That’s a lot to live up to. I read and loved Little, Big a few years ago—the book for which Crowley is perhaps best known—and greatly admired his voice. Crowley evokes a dream-like sense of magic that seeps into the reader’s pores, and when we look up from the page, the world looks a little bit different.

And so it is with Ka. Our narrator is a widower who has taken in a sick and dying crow, and in his loneliness has welcomed the crow to stay. Of course, this is no ordinary crow, but Dar Oakley, two thousand years old and very close to immortal. Over time Dar Oakley and the man learn to understand one another, and our narrator has taken on the task of documenting Dar Oakley’s life as he approaches the end of his own.

Dar Oakley is the first of his kind to enter the world of humans, which he calls Ymr and is distinct from the world of Crows. He hadn’t always had a name—no Crow did, when he was young. Before Dar Oakley befriended the shaman he calls Fox Cap, there was no need for names. He would be the first in that, and in many other things: thinking the world could be different than it is; discovering a place where no Crows live, farther from his family’s freehold than any Crow had ever travelled; entering the world of humans, and learning to speak with them; going to the Underworld, and returning from it (more than once); and stealing the secret of immortality.

We follow him from the Neolithic to the Medieval eras, and into modern (and possibly future) times, across oceans and continents, through the rise of civilizations and religions. In each time and place, Dar Oakley is a harbinger—or perhaps instigator—of change, both for the society of Crows and that of people.

Within the epic sweep of a tale that plays out over millennia and multiple planes of existence, Crowley charms us with the day-to-day life of a Crow, from hunting voles to building nests; the profound effects of the coming of spring; the social hierarchy of a crow’s extended family; navigation in a life that has no roads or paths (daywise, darkwise, and billwise being the cardinal directions—there is no word for “south” in the Crow canon).

The book is broken into three parts, one for each life he remembers having lived: “Dar Oakley in the Coming of Ymr,” in which he experiences a shift in perspective that allows him to see and become part of the world of humans, which no Crow had ever done; “Dar Oakley and the Saints,” in which he finds himself the only Crow on an island hermitage, populated by sea birds and monks; and “Dar Oakley in the New World,” where he encounters his mate from a previous life, still alive herself, having stolen (as Dar Oakley once did) the secret of immortality. In each, he finds a human counterpart to whom he tells his tale and shares his adventure.

Ka is a fable, a lullaby, a naturalist’s guide to crows, and a peek at a hidden world just beyond our senses. (If I were to compare it to another work, it would be The Buried Giant by Kazuo Ishiguro—who recently won the Nobel Prize for Literature. Just saying.) This is a book worth reading twice. 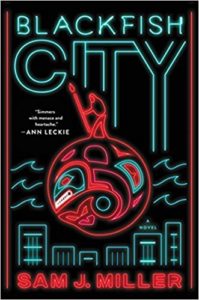 The floating city of Qaanaaq is home to climate refugees from all over the world. Over-crowded and in varying states of decay, the city continues to be run by advanced software that has taken the power of decision out of the hands of the people. Much of the population has fallen into poverty, and many have turned to crime for sheer survival, while a wealthy elite class—families of the city’s founders or “shareholders”—continues to enjoy a life of privilege. At the center of the city is the Cabinet, a place dreaded and feared—a refuge for the wealthy, a final quarantine and prison for the sick and poor. And now a new illness afflicts the city, a devastating sexually transmitted disease that gradually untethers its victims from reality until it finally kills them.

Underlying it all, an obsession for people of any class or station, is an anonymous broadcast called “City Without a Map.” Part atlas, part almanac, and part counselor, the broadcast seems to speak directly to the hearts and minds of the ill, impoverished, and oppressed as it doles out practical information and emotional support, narrated in pieces by unnamed residents who have no more idea of the work’s authorship than do the listeners.

When a woman arrives in a skiff accompanied by an orca and a polar bear, speculation and fear regarding her origins and intent become a focus at every level of this fraying society. There are rumors that she has slaughtered her way across the grid cities before she arrived in Qaanaaq. She comes to be known as the orcamancer, nano-bonded to her animal companion, and thought to be the last of her kind.

The orcamancer, the Cabinet, the breaks, and the broadcast all collide as the reader follows each character in pursuit of answers: Kaev, a beam fighter paid to throw fights, now coerced into an unwanted role as hired thug, who lives in a state of clouded confusion until he falls into the cold sea below at the end of every fight; Ankit, assistant to a politician, who wants nothing more than to heal her brother and have her mother released from the Cabinet; Fill, wealthy and connected, obsessed with discovering the identity of the Author; and Soq, an accomplished slideway messenger now in the employ of Qaanaaq’s premier crime boss, and who through a chance encounter may have acquired software that could upend the social order of Qaanaaq.

Blackfish City has all of the elements of a page-turner, with conspiracies and mysteries aplenty, and Miller’s juxtaposition of advanced technology and a decaying world is so rich you can almost smell the ozone and rust. Miller’s treatment of divided loyalties and lost and found families (no spoilers—you’ll just have to read the book) is as complicated and convincing as any real life has to offer.