No intro this time, just reviews. Enjoy your spring! 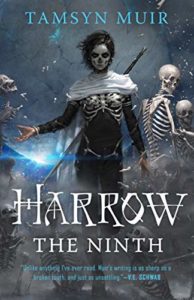 Before I talk about why Harrow The Ninth is amazing, I first need to tell you to go read Gideon the Ninth if you haven’t done so already. Not only is it the first book in Muir’s Locked Tomb Trilogy, which means Harrow The Ninth isn’t going to make a whole lot of sense if you decide to come in on book two, Gideon the Ninth is just flat-out one of the most original, entertaining, and plain kick-ass books I’ve read in a very long time. Seriously, go read it and thank me later.

Okay, I’ll assume you’ve gone and read Gideon the Ninth and been blown away at Muir’s wonderfully creepy world of necromancers and magic and swordfights, and are now prepared to discuss the sequel. Good news—Harrow The Ninth is just as excellent, if not better than Gideon the Ninth (which, I’ve hopefully established, is fantastic). In it, Muir continues the twisting story of the Ninth House’s attempts to keep from decaying into obscurity, but the scope of the challenge this time goes far beyond a test on a single planet.

Now, I know quite a few of you are probably saying to yourself, “That’s the vaguest description of a book I’ve ever seen, what the hell is wrong with you?” but I’m trying to avoid spoiling anything about the story because it kinks more than a bone-sculpting revenant trapped on an undead space station with ancient beings of unfathomable power, and I wish I could experience it again for the first time. Muir expertly weaves threads in and out of the still-delightfully grotesque loom of the overall plot, and just when you think you’ve figured one part out, two more creep up from behind to rearrange everything you thought you knew about what was going on. Oh, and there’s also plenty of vibrant action sequences, witty repartee, and smoldering sexual tension peppered throughout like a particularly fine marrow soup (and trust me when I say that reference will make much more sense once you’ve read the book).

Go find a copy of Harrow The Ninth as soon as it’s available, then join me in the agonizing wait for the final book, Alecto the Ninth, because so far this trilogy is as good as it gets.

Read if: you want to know a hundred different ways to say bone; you like it when things get weird; GAY SPACE NECROMANCERS 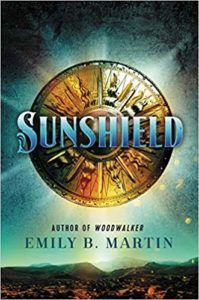 The second book I’d like to share with you is Sunshield, by Emily B. Martin, which follows three characters—an outlaw, Lark, known as the Sunshield Bandit, who preys on slaver caravans crossing the inhospitable Alcoro wastes; a young, untested diplomat named Veran trying to prove himself to his accomplished family in the foreign Moquoian court; and the mysterious captive Tamsin, consigned to a wasting death yet still holding out hope she can make a difference. The three find themselves drawn together in a web of political machinations, subject to shadowy figures seeking to solidify control over the Moquoian court’s politics and social stances.

Martin does a fine job breathing life into each of the protagonists, imbuing them with hidden depths that slowly reveal over the course of the book, and each faces their own set of challenges that feel both believable and relevant. I was particularly impressed with how Lark and Veran’s relationship develops over the course of the book, and it’s clear Martin cares about making sure her characters are multi-faceted and nuanced.

Another thing I quite enjoyed was the world-building and environmental detail Sunshield displays. As someone who went backpacking quite a bit as a kid (though, as the designated mosquito magnet, I can’t say those are fond memories), I immediately felt like I was back out in the wilderness after the first few pages. The world of Sunshield is just as much a character as any of those with names, with different regions evoking similarities to those of our own. Witnessing the characters traverse the dry wastes of the Alcoron canyons felt like traveling through the American southwest, and the humid jungle of Moquoia would fit right at home in Louisiana or Florida. Martin displays a natural aptitude for bringing the environment to life around the people inhabiting it, but without overshadowing their stories.

Coupled with gritty combat scenes and a sense of social and environmental awareness, Sunshield was well worth my time spent reading it. The conclusion ends on a significant cliffhanger, but I gladly await future entries in what looks to be a well-crafted and cared for world. 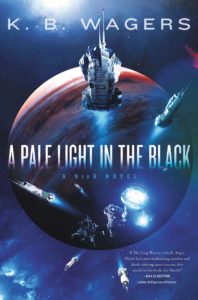 For this month’s final entry, I’d like to highlight A Pale Light In The Black, by K.B. Wagers. A brand new entry in the military SF genre, A Pale Light In The Black follows the trials and travails of the Near-Earth Orbital Guard—aka the NeoG—as they work to unravel an insidious conspiracy while also trying to prepare themselves for the annual Boarding Games competition between the various service branches. The viewpoint follows the whole squad of the Zuma’s Ghost, an Interceptor-class space patrol craft, but primarily revolves around Maxine Carmichael, scion of an extremely powerful family who’s trying to find her own path in life, and freshly assigned to the team.

One of the main reasons I included A Pale Light In The Black as one of my reviews is that in a mil SF field crowded with technical descriptions and heteronormative centering, Wagers does an incredible job of creating a balanced, diverse cast of characters who demonstrate the sheer breadth of humanity. The importance of squad cohesion and interpersonal relationships permeate every part of the story, and always in a way that enriches the overall plot. I was not expecting to become as invested in the adventures of the members of Zuma’s Ghost as I was, which is always the mark of excellent character development.

Wagers also doesn’t stint on the action, interspersing various rescue and boarding missions among the twists and turns of the overarching mystery and the buildup to the Boarding Games, but none feel extraneous. Instead, they’re more opportunities to witness Max and the crew’s connections develop and grow in ways that never feel forced. By the time I reached the end of the book, I felt like I had watched a family come together, and found myself wanting to know where they were headed next. Hopefully Wagers continues writing more books in this universe, but even if they don’t, A Pale Light In The Black is definitely still worth reading.

Read if: you like space adventures; you watch combat sports; you appreciate that human beings are complex and fascinating creatures

That’s it for this time, everyone. See you all on the flip side!

Burn the Dark, by S.A. Hunt
Parable of the Sower, by Octavia E. Butler
Go Tell It on the Mountain, by James Baldwin