This month, I’ll explore the nature of caretakers in The Sum of Us anthology, take a trip back to The River Bank in a sequel to The Wind in the Willows, and get turned into an emotional wreck by N.K. Jemisin’s The Stone Sky. 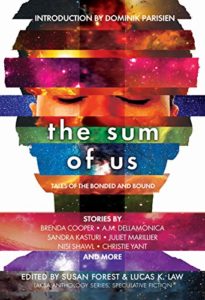 “If we believe that we are the protagonists of our lives, then caregivers—our pillars—are ghosts, the bit players, the stock characters, the secondary supports, living lives of quiet trust and toil in the shadows. Summoned to us by the profound magic of great emotional, physical, or psychological need, they play their roles, and when our need diminishes . . . Fade.”

Thus reads the blurb for The Sum of Us: Tales of the Bonded and Bound, an anthology of twenty-three stories that explore the nature of caretaking. Editors Susan Forest and Lucas K. Law have curated stories from Nisi Shawl, Christie Yant, Caroline M. Yoachim, Alex Shvartsman and others, stories that feature hospice attendants, surgeons, family, mentors, friends, lovers—all dealing with caring for loved ones, or people they barely know.

This collection drew me in more than I expected. True, there are similar themes, from a person caring for their charge in a group home to robot caretakers. But the stories also surprise in their uniqueness. A henchman protects and aids his aging supervillain boss. A doctor uses nanobots to heal refugees, but needs the help of another doctor to confront the horrors of her own past. An attendant assists a dying Oracle as she goes to make her final prophecy. A space welder and her human guide begs the question: Which one is the caregiver? Which one receives care? The answer is both: The line between them becomes blurred.

Some stories are breathtaking in their brilliance. Sandra Kasturi’s “The Beautiful Gears of Dying” is angry, full of spite and pain, yet achingly gorgeous as the robot nurse tries to soothe its human charge’s remaining days of life. In “A Mother’s Milk,” Heather Osborne has an alien on the verge of a breakthrough discovery learn to her dismay that her male partner has become pregnant and wants her to care for him and their offspring. Nisi Shawl’s protagonist in “Sunshine of Your Love” wavers between the duty of caring for her disabled sister and the attraction she feels towards a dangerous research participant. And Caroline M. Yoachim’s “Dreams as Fragile as Glass” is brief, but heartbreaking for any parent who learns that their child has a terminal disease.

A portion of this anthology’s sales goes to the Canadian Mental Health Association, so definitely consider buying a copy, if not for yourself, then for someone who is serving as a caretaker. Hopefully the stories can serve as comfort to them. At the very least, it should make us all appreciate caretakers for all they do. 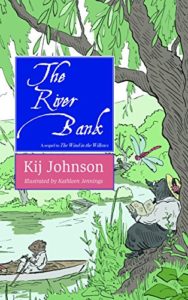 I grew up with the Grosset and Dunlap Illustrated Junior Library version of The Wind in the Willows (the one with Rat and Mole hoisting a protesting Mr. Toad up to his bedroom while Mr. Badger supervises, hands clasped behind his back). Though I have seen movie adaptations (including the elusive Disney version with Bob Hoskins playing the Badger), I was not aware that there were also several written sequels. The River Bank by Kij Johnson is the first one written by a woman, and it certainly deserves a place next to the original.

Johnson continues the adventures of the River Bank by bringing in two new residents: Beryl, a lady mole who is an Authoress (insert squeal of delight) and the proper model of pragmatism; and her housemate, Rabbit, who appears to be more flighty, foolish, and easily susceptible to Mr. Toad’s charms, much to the dismay of all.

Yes, all the players from The Wind in the Willows are here: the River Rat, Mole—who is surprising antagonistic toward Beryl’s arrival—Mr. Badger, Otter and his son, and of course, Mr. Toad, still up to his conniving tricks. There’s a lovely bit at the beginning of the book when his friends are wondering whatever happened to the Toad’s promises to be good and modest in the previous book, and he exclaims, “Was I supposed to remain that way?” It feels like Johnson’s portrayal of Mr. Toad is a bit more of a crybaby, though now I have to re-read The Wind in the Willows to see if he was always like that.

I do know that Johnson succeeds in reproducing the flavor of the original while at the same time opening the River Bank up to be seen through new eyes. An entire chapter is devoted to Beryl exploring the River Bank on her bicycle, and Johnson’s gorgeous descriptions allows the reader to be drawn in by the sights, smells, tastes, and sounds that Beryl experiences, causing one to linger despite oneself. There are nods to events in the previous book—a revisit to the Piper at the Gates of Dawn, and, of course, another wild adventure with Mr. Toad, who sweeps along with the hapless Rabbit . . .

. . . or is she? To my astonishment, while I loved Beryl, as we learn more about Rabbit, I found myself growing more charmed by her. Behind a silly and carefree attitude is perhaps a very clever mind, who just so happens to find herself in interesting predicaments. How is it that she found herself in a hot air balloon by accident? And just how did she manage to get carried off by bank robbers during a heist? We never find out, but Rabbit belies the stereotypes of this world, both of rabbits and of females.

I can’t review this book without mentioning the wonderful illustrations by Kathleen Jennings. They are absolutely glorious and bring the world of the River Bank into greater focus, from a tiny trail of bees buzzing just on the edge of the page to a centerpiece of Beryl and Rabbit gazing with delight at the front of Sunflower Cottage.

Critics might say that The River Bank overly focuses on the two female characters, and that may be so. However, their presence brings a new flavor to the Wind of the Willows world, one that I was unaware was missing when I read it as a child. There are Victorian elements that are more pronounced with Beryl and Rabbit’s presence, and yes, even feminist elements with the enterprising Rabbit solving problems in a most female way. I can’t think of a better way to bridge the world of Mole and the River Rat to readers in this day and age. 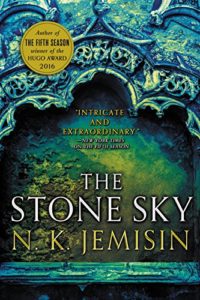 Few stories leave me an utter wretched mess, curled in a corner, devastated by the fury and beauty of a story that’s picked me up, wrung me dry, and left me aching for more. The Stone Sky—nay—the entire Broken Earth trilogy has joined that list.

By the time you read these words, I will have dried my eyes and moved on, but the words remain . . . and that’s one of the themes of The Stone Sky. What remains, what changes, and what disappears. How loss echoes through time and impacts the present and future with its absent touch. And that’s just one of the themes. Just one.

For those of you who have been waiting to read the Broken Earth trilogy, now’s the time. Get it now. Because once you finish reading The Fifth Season, you must get The Obelisk Gate. And once you finish that, you will be immediately grabbing The Stone Sky. For this series is really just one single story. And oh . . .

At the start of The Stone Sky, Jemisin takes pity on us and gives us a mini summary of the events at the end of The Obelisk Gate. Essun had just used the Obelisk Gate to defend Castrima. She has learned that in order to save the world, she must use the Obelisk Gate to recapture the moon from its erratic orbit. However, using the gate to defend herself and her friends killed Alabaster, friend, thorn, mentor, lover. Also, she herself is turning to stone whenever she uses orogeny. Oh, and her daughter Nassun is still alive . . . and also knows how to use the obelisks. Nassun, who has just killed her own father. Who is being protected by Essun’s former guardian, whom Essun hates with all her strength. And who plans to use the Obelisk Gate not to save humankind, but destroy it.

We learn in The Obelisk Gate that Essun’s story (told in brilliant second-person POV) and Nassun’s story (told in third person POV) are narrated by Hoa, the stone eater who has metamorphized into the form of a young man. In The Stone Sky, Jemisin now weaves in his story using first-person POV, taking us back centuries and centuries to when Hoa lived in Syl Anagist, not as a stone eater, but as a Tuner. We learn what brought about the events of the moon being thrown off its path, how orogenes became both hated and needed in the world, and how the war started between humans and the Evil Earth.

For the Earth itself is a character in this book. Ancient, aware, and very, very angry over what humans have done, it will stop at nothing to get rid of all the creatures that crawl on its surface. Think about that next time someone mentions global warming. How long do we poison the Earth before it decides to strike back?

Already I’m running out of space in this review. I haven’t even gotten to showing the parallels of Essun’s attempt to reunite with her daughter with the Earth’s desire to bring back its own child, the moon. How Essun and Nassun’s relationship is tragic, not by their own actions, but due to the world that hates them. How this book is heavy with the presence of time. You can feel it pressing down on the pages, see it lingering on words and names so ancient their meaning has been lost. How Jemisin winds magic and science together so effortlessly. How a girl with Afro puffs can face the Evil Earth with rage of her own; and how a mother heartbreakingly realizes that she and her daughter will never have a normal relationship. How, despite how much the world hates us, there’s always hope.

If stories like this survive, maybe we will, too.