This month, LaShawn peeks at letters in This is How You Lose the Time War, gets steamy in Pimp My Airship, and enjoys a heaping serving of revenge in The Rage of Dragons. 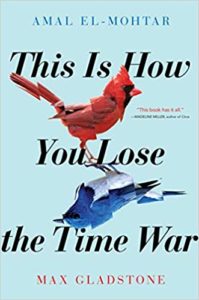 Epistolary tales in science fiction and fantasy aren’t new. Bram Stoker’s Dracula, Andy Weir’s The Martian, Max Brook’s World War Z— even I wrote a short story (bit.ly/2Wt7Zae) that is set in a framework of HR memos. Amal El-Mohtar and Max Gladstone have now added their own contribution to the epistolary genre with their collaborative novella This Is How You Lose the Time War. And while it isn’t strictly epistolary—there is a running narrative that frames the letters—the method of the letters and how they’re created makes for a very unique and fun story.

Two soldiers who identify as female are on opposite sides of a war: Red, who serves the Agency, and Blue, an agent of the Garden. As the book opens, Red is surveying her victorious handiwork in the aftermath of a battle when she sees a sheet of paper that only has the line “Burn before reading.” She does, and a letter unfolds as the paper burns, a taunt from Blue. Intrigued, she writes back, and thus begins a relationship that traverses time and space.

The methods of the letters are highly unconventional. Words are hidden in the rings of trees, tea leaves, a beaker of boiling water left in an MRI, and on the insides of a seal, the victim of a groanworthy but excellent pun. The letters are poetic and wicked and sly, and as Red and Blue try to one-up each other, their relationship changes, deepens from rivals to friends to lovers. However, their longing can only be confined to their letters, as they are still embedded in war against each other, and the two sides—the cyber-militant Agency and the organic infestation of Garden—are starting to suspect something is wrong with their best agents.

Part of the fun of reading a collaborative book is figuring out who wrote which passage. Initially, I thought the framing narrative was written by Gladstone and the letters, which were both playful and seductive, were written by El-Mohtar. Part of this was because the letters of Red and Blue felt too similar, particularly towards the beginning. But then I became so caught up in the story, the time travel, the worlds, the relationship between Red and Blue, that I forgot who wrote what. (El-Mohtar and Gladstone do reveal how they wrote it in this interview: bit.ly/2XF2BCe.)

This novella is too short for us to see the worlds of the Agency and the Garden. Reading this book made me crave more, and yet at the same time, I didn’t want to read it too fast. This book is meant to be savored, and if anything, makes me long to write a letter myself. 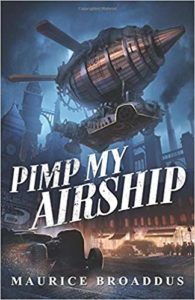 I have covered Maurice Broaddus’s steampunk universe in a previous column with his novella Buffalo Soldier. Now Broaddus is back with a full-on novel, Pimp My Airship, and like its predecessor, it is very steampunk, it is very black, and it is very, very Broaddus.

Sleepy is a working-class steam engineer who only wants to spit out poetry and smoke his chiba leaves to forget his life. Coming home from work one day, he meets (120 Degrees of) Knowledge Allah, a man spouting cryptic words and a taste for revolution. When COPS (City Ordained Pinkertons) raid the theater Sleepy is performing at, Sleepy and Knowledge Allah bang up a COP vehicle during their escape, which turns them into wanted fugitives. At the same time, Sophine Jefferson, a mixed debutante, agrees to employ her own scientific skills to the insidious Lord Melbourne, much to the dismay of her father. It’s not until her father is killed under suspicious circumstances that she realizes she is mired in a political war that will challenge her views on race and humanity.

Pimp My Airship has everything that makes a steampunk novel—steam, pipes, dirigibles—but Broaddus brings in his own commentary on racism, classism, and institutionalism, along with the effects of robots displacing workers. He does this by reimagining the city of Indianapolis into its own steampunked character, from the skyscrapers and the air trams of the Overcity, where those with money and prestige are able to live in comfort, to the ill-lit alleys of the Tombs, the undercity, where those with no money and no hope eke out an existence. There’s even a newspaper that spins its own bigoted biases.

What I loved most about this novel is Sleepy and Knowledge Allah. Thrown together by circumstances, they’re not buddies—most of the banter between them is funny, but some is laced with barbs. And yet, there are layers to the two of them that go beyond the facades they wear. Image and presentation are important to them. Sleepy stops to choose the right suit to wear before going on the run. Knowledge Allah is insistent on his chosen name, knowing that his real name belongs to his immature, impulsive past self, someone he doesn’t want to be associated with anymore. Perhaps this is why he is constantly digging into Sleepy, searching to see if there is more depth than he presents. And there is—but Sleepy has a hard time acknowledging it. One of my favorite and most cutting scenes is when Sleepy gets left behind on a mission. He understands the reasoning, and is even glad about it, but still, he has a moment of absolute hurt in him. He then proceeds to pull off a stunt that is amazing and wonderful and had me cracking up in my chair.

And maybe that’s the whole point of Pimp My Airship. There are no heroes in this novel. Only people who want to live their lives and have fun in peace. Unless they’re pushed to defend that way of life, that is—and like Knowledge Allah says, “The revolution will not be televised.”

Also, there’s a soul circus in this book, which is a real thing (bit.ly/2Wx9Nnk). Black Steampunk, YEAH! 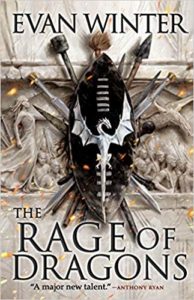 From Black steampunk to Black Epic Fantasy. Unfortunately, I have not had the pleasure of becoming a Game of Thrones fan. But for all of you who are and are looking for a fix while you wait for the books to be finished, may I suggest The Rage of Dragons? It has dragons, demons, fast-paced battle scenes, political intrigue, and, most important of all, sweet, sweet revenge.

Tau is part of the Low Common caste, which doesn’t give him much to aspire to other than becoming a soldier in the seemingly endless war between his people, the Omehi, and the Xiddeen, natives of the land the Omehi decided to settle on. Tau doesn’t like to fight; he has a plan to get himself injured so he can serve as an administrator rather than a warrior. However, when he defeats a Noble in a fighting contest, the Noble in indignation demands a blood-duel, a fight to the death. Tau’s father steps in, quickly taking Tau’s place, and is killed for it. Horrified, Tau vows that he will not rest until everyone who was involved his father’s death is killed by his own hands.

At first glance, this book is just a revenge story. We follow Tau as he trains mercilessly for his single-minded purpose, getting thwarted by circumstance and his own limited class. We meet Zuri, his childhood friend whom Tau is in love with, but who learns that she is Gifted and destined to be sent to the war to use her magical powers. We also meet Jayyed, the commander of a fighting unit who takes Tau in, seemingly as a joke, but who has ulterior motives for choosing someone in a lesser caste. The infighting between castes is strongly emphasized, more so than the war that the Omehi are in. But the war does intrude upon Tau’s plans, whether Tau likes it or not.

And as Tau fights his battles, both on the field and within himself, he starts to learn that things are not as simple or clear-cut as his thirst for revenge makes out. In a sense, Tau reminded me a lot of the people in the Undercity in Pimp My Airship: stretched to the breaking point, helpless rage boiling just below the surface, with no chiba leaves or poetry to temper it.

I read The Rage of Dragons in one day, and was swept up in its intrigue, its pain, and its hints at peace, which comes with a high cost. If you like books with lots of fights, this one is for you. I’m very much looking forward to the next book in the series.