In this month’s column, we review Radiance, by Catherynne M. Valente, The Buried Giant, by Kazuo Ishiguro, and Bone Swans, by C. S. E. Cooney.

As the year winds into winter, that season of feasts and firesides, I’m drawn to writers who take fairy tales between their teeth and gnaw them to the marrow. Engaging gorgeously with both the content and concept of fairy tales are the following books, each grinding favourite stories into flour and baking them into wildly different delicious shapes.

A moment’s dwelling on full disclosure: Catherynne Valente and C.S.E. Cooney are both dear friends of mine. In both cases I fell in love with their words first. 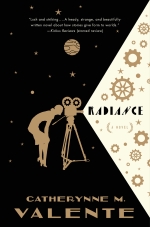 Radiance is the sort of novel about which you have to speak for hours or hardly speak at all: either stop at “it’s magnificent” or roll on to talk about form, voice, ambition, originality, innovation for more thousands of words than are available to me here before even touching on the plot.

Assembled from film footage, personal diaries, ad copy, gossip rags and grudging testimony, Radiance is the search for Severin Unck, a documentary film maker who vanished while shooting her most ambitious project: an investigation into the destruction of Adonis, a small fishing village on Venus. But this is a thoroughly different Venus in a thoroughly different solar system, where humans left Earth for the aether-ridden stars in the 1870s and populated its planets with their imperial powers, supported in their reach by a protein-dense substance called callowmilk, harvested from callowhales, enormous creatures so little understood that it’s uncertain whether they’re animal or vegetable.

Most of the action—if it can be called action when it’s an assemblage of documents—takes place between the 1920s and 1960s, alternating glimpses of Severin’s childhood (through the eye of her father’s constantly shooting camera) with segments of the work of her adulthood and the aftermath of her disappearance. Mysteries unspool into mysteries: the secret of Severin’s birth mother, depositing her on Percival Unck’s doorstep and stepping out of her story; the secret of what happened on Adonis; the question of who murdered Thaddeus Irigaray and why. But these questions are grace notes in the orchestral swell of this book, a book with a protean spine self-consciously shifting from Noir to Gothic to Fairy Tale as Percival Unck and Vincenza Mako argue over what kind of story they will make of Severin’s life and perhaps-death.

In its execution—juxtaposing fragments of varied voices that tell a story between them as much as to you—it reminded me of Siri Hustvedt’s The Blazing World, but turned outwards instead of in: there are no footnotes here to bend the eye down and deep, but constant calls to look out, look at each other, look at the solar system, look through this camera. There are musings—wonderful, heart-breaking musings—on what stories are, on what they do to people. There are repeated invitations to question your narrators even as they give you systems with which to understand what they offer.

It’s magnificent. It’s Valente’s best novel yet, by a very wide margin, and one of the best I’ve read this year. 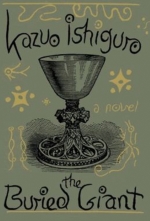 In The Buried Giant, history, character and fable slip and hook into each other like links in chain mail until you can step back to see what sort of whole it makes. It’s a mist-smudged homage to Arthurian myth, silvered into a kind of story-telling smoke.

In an England after Arthur, after the Romans, a strange memory-thieving fog covers the land, plagued also with ogres, pixies, and dragons: Christian Britons and pagan Saxons communicate haphazardly, trading, living, intermarrying, mostly unaware of the world outside their day-to-day transactions. Beatrice and Axl, an elderly couple tired of the casual mistreatment they receive in their village, decide to set out to visit their estranged son in his village some distance away. On their journey they meet a strange boatman and an old woman who plagues him by slaughtering rabbits in the ruins of a Roman villa; a Saxon warrior, Wistan, and a monster-bitten orphan boy, Edwin; and Gawain, one of the last of Arthur’s knights, tasked with slaying the great she-dragon Querig, whose breath may be the source of the mist.

This book provoked a lot of controversy when it appeared: Ishiguro made a comment (bit.ly/NYT_Ishiguro) saying he hoped readers wouldn’t dismiss the book because of the fantasy elements, Ursula Le Guin responded (bit.ly/leguin_ishiguro) pointing out that “Fantasy is probably the oldest literary device for talking about reality,” to which Ishiguro responded (bit.ly/guardian_snobbery) saying he’s “on the side of ogres and pixies.” I don’t want to argue with Le Guin’s reading of the book—the reading of which she found “painful”—but I do disagree with it completely.

The Buried Giant is quiet, which is an odd thing to say about a book chiefly made up of circling conversations: but it is quiet, and it is devastating, and it is beautiful. It’s a fable that doesn’t draw and quarter itself into allegory, but asks painful questions about collective and individual memory, the grace and agony of growing old together, and the nature of love. Beatrice asks, early on in the book:

“I wonder if what we feel in our hearts today isn’t like these raindrops still falling on us from the soaked leaves above, even though the sky itself long stopped raining. I’m wondering if without our memories, there’s nothing for it but for our love to fade and die.”

These questions shift their shape throughout the book the way light shifts through swirling fog, as conversations are revisited, layers of forgetfulness fall away, and terrible truths surface like bones from a shallow grave.

I was powerfully moved by this book and thoroughly absorbed in its reading. It’s steeped in Arthuriana and lovingly contributes to it; I saw nothing in this book that smacked of genre snobbery, nothing that seemed to me an awkward appropriation of fantasy tropes. Its fantasy lineage is more Gawain and the Green Knight than The Fionavar Tapestry, but that’s hardly a criticism. 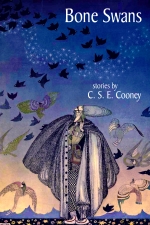 Collecting five novellas, one of which is original to it, Bone Swans is a vivacious, eminently devourable debut thick with the language and experience of folk and fairy stories. Absolutely no one inhabits fairy tale the way Cooney does. Other writers might retell fairy tales, muse on fairy tales, be inspired by fairy tales, but she synthesizes them with a fierce tenderness utterly her own: Cooney’s mode of composition is to bury fairy tale bones beneath a juniper tree and coax them up out of the earth to sing of how much they loved their murder.

Of the five stories in this collection—featuring desert cities, drowned cities, ruined cities, perfectly urbane mayoral cities, and cities hollowed out by apocalyptic plague—I’ll single out two particular favourites: “The Bone Swans of Amandale” (the original piece from which the collection is titled) and “How the Milkmaid Struck a Bargain with the Crooked One,” which first appeared in GiaNotoSaurus and may still be read there (bit.ly/giga_milkmaid).

An ancient juniper tree grows in Amandale, and beneath it Ulia Gol, the ogress Mayor, buries the slaughtered bodies of Swan Folk, forcing children to sing their bones out of the earth and into the shape of musical instruments. She’s assembling a whole orchestra out of swan bones, instruments who’ll play themselves and spare her the cost of shelling out for musicians. Of the bevy Ulia Gol has killed only one swan-lady remains: Dora Rose, beloved of our narrator, Maurice, one of the Rat Folk. Together with the Pied Piper and three children Ulia Gol mangled for disobedience, they set about foiling the Ogress’ plans.

Cooney constitutes whole worlds and landscapes out of fairy tale: “The Juniper Tree” is the background magic that fuels Ulia Gol’s work, which is the substance of a ballad, which is thwarted with reference to “The Pied Piper of Hamelin,” who in turn has his powers from a dreaded Fairy Queen. But these aren’t played for laughs, and the world isn’t a Tenth Kingdom style romp through a stylised symbology of popular stories: Maurice is an amoral, unreliable narrator, and no happiness is wholly without pain.

In “How the Milkmaid Struck a Bargain with the Crooked One,” Gordenne Faircloth, the titular Milkmaid, is accused of being Gentry-born (which is to say, of Faerie) because her father has claimed she can spin straw into gold. What follows is a “Rumplestiltskin” retold by way of “East o’the Sun, West o’the Moon” and the Mabinogion, with all characters granted the depth and richness one would expect from a novel-length work.

There’s a splendid theatricality to Cooney’s dialogue, an energy that itches through every line: each piece, regardless of narration, has a voice in it that is explicitly telling stories with appetite and relish. Her characters command, demand attention, and reward that attention with troublesome enchantment that resolves, as in all good fairy stories, into satisfaction.