The year’s winding down, and what a year it’s been: a year of learning and teaching resistance, endurance, and persistence; a year of pushing into the wind. I find myself reading and thinking about scales of damage—about how we manage news of unprecedentedly devastating hurricanes, fires, earthquakes, and the fact that in their midst we somehow still exist in a world where people take it upon themselves to kill others, whether with guns, legislation, or foreign policy.

As a writer and as a critic, what I come back to is the thought that we deal with cataclysms by making stories of them. As we all find new ways to breathe this winter, I want to look at two books that play with voice, memory, and megafauna in compelling and beautiful ways: Fran Wilde’s trilogy-concluding Horizon and Brooke Bolander’s The Only Harmless Great Thing. 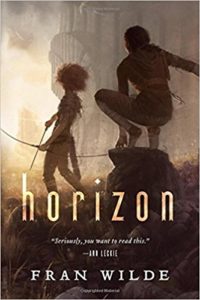 Kirit, Nat, Ciel, and Wik have tumbled out of the clouds and found themselves not cloudbound but grounded, wingless and windless, struggling to survive in the shadow of an enormous creature from which grow the sky-scraping bone towers in which they’ve lived their whole lives. But the creature—which they call the city—is dying, immobilised by the enormous weight of bone on its back. When the city dies, the towers will fall—and with them, our heroes’ friends, families, and entire society. They decide to split their party: Nat and Ciel will struggle to climb back up above the clouds and evacuate the towers, while Kirit and Wik will journey to the horizon in search of a new home. There are, after all, other cities—other giant beasts on whose backs people could live.

That is, if there aren’t other people already there.

The degree to which the Bone Universe books mirror our present moment continues to stagger me. Where Cloudbound dealt with misinformation, demagoguery, and a society fracturing under unprecedented stressors, Horizon tackles sustainability and its lack, the incomprehensible enormity of climate change—or more specifically, what happens when your climate is literally the giant dinosaur on whose back you live. Broken into narratives of Above and Below the clouds, Horizon explores what happens when the histories from which a society derives its identity and comfort are shown to be built on a lie, or an obscured truth, or simply no longer relevant, no longer capable of saving it.

Horizon’s great strength is in managing its scale: It pours vastness into my head, makes the sky accessible. It’s the culmination of two books’ worth of worldbuilding, two books’ worth of discussing bridges and updrafts and technology, and the engineering involved in climbing into and out of the clouds is of a piece with the engineering involved in building the trilogy’s own scaffolding.

That said, the characters’ speech and experience of each other felt stiffer to me than it has in previous books; the mechanics governing Kirit, Wik, and Nat’s decisions to lie or not sometimes clunked, and left me unpersuaded that certain plot developments were inevitable. But even this folds into the worldbuilding: As I read, I was reminded that in the Towers language is an underused technology. I found myself recalling the wonder with which Nat watched Ceetcee develop a compromise in Cloudbound, how “her words made a bridge”; Kirit marvels at people whose legs are more developed than their arms, whose language is flowing and fluid and musical. Where the language of the Towers is codified and (literally) calcified into Laws and songs, speech that flows between people like a metaphor is as strange to adapt to as solid ground under one’s feet.

That stiffness aside, Horizon is a beautiful, thorough, satisfying conclusion to the Bone Universe trilogy—one that leaves me hoping for a second series, one focused on other city-riding peoples, exploring what the winged folk from beyond the clouds look like to those who never rose. 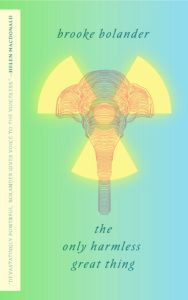 If you’re familiar with Brooke Bolander’s short fiction—or, for that matter, if you’re familiar with Tor.com’s other alternate-US-history novellas featuring rampaging megafauna—you’d be forgiven for thinking that The Only Harmless Great Thing would be a fast-paced, rollicking piece of work. My own experience of Bolander’s work thus far has been a texture of bourbon and struck matches, whipcrack and smoke, of a voice that sweeps broken glass from bar tops. When I think of Bolander’s prose, I always think of fast, hard things that cut, of a sweetness that burns on the way down.

But the work she does in The Only Harmless Great Thing is different, and it’s dazzling.

Elephants tell stories, share a collective memory, and trace their lineage back to Furmother, a mammoth ancestor who rescued stories from captivity in order to share them with the world. The voice of the Many Mothers is one piece of The Only Harmless Great Thing, existing aslant three other characters’ stories: Regan, a radium girl forced to teach elephants how to paint radium dials before she dies of radiation poisoning; Topsy, the captive elephant with whom she communicates; and Katherine, a scholar in Topsy and Regan’s future, trying to bridge the past and her present for a specific purpose.

This book is slow in the way bones are slow, its prose shaped and sculpted with exquisite care. It’s a book of fitting pieces together, assembling them into a skeleton that sings the story of its stolen skin. It’s prose that demands attention and focus in the way a sacrament does—interspersed with Regan’s firecracker voice, with Katherine’s hesitant discomfort.

If I’m waxing poetic, it’s because The Only Harmless Great Thing is organized around the logic of poetry. It draws its title from a John Donne poem. It fits powerfully into a lineage of Muriel Rukeyser’s U.S. 1, of Anaïs Mitchell’s Hadestown, of deep thought and fierce mourning, an elegiac fight song. It’s the most beautiful and heart-breaking piece of work Bolander’s written to date.