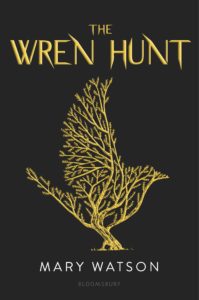 Mary Watson has woven a tale of modern-day Irish druids and romance in this YA thriller. Wren is from a tribe of Augurs, a faltering druidic tradition under threat of extinction by the machinations of their rivals, the Judges. The matriarch of the Augurs hatches a plan to undermine the Judges and sends Wren into the proverbial nest of vipers: Wren becomes an intern at the manse of a powerful Judge matriarch, Calista Harkness. Wren must find the source of Judge magic while masking her identity from the cunning perceptions of the enemy. Along the way, she meets a boy, and she discovers that everyone, even the people she loves, has secrets.

The Wren Hunt plays out in clean, occasionally elegant prose. The narrative draws the reader in with the senses, especially—as might be expected of a story about druids—with poetic and beautiful imagery utilizing the natural world. Just as there is darkness in the woods, there is darkness in the story: A creepy, tense, and disorienting opening sets the stage for a tale where loss and death and the end of a people are the stakes.

Here, magic is subtle but fascinating; culture is intricate, with politics, complications, and long histories. Culture and magic are inextricable, as might be said of culture and language. Within a few pages, this narrative will have you believing that if you book a flight, you might find this village, that stone of power, stumble across the dusty old book with Ogham symbols, and maybe even hear chanting in the night, across the fertile fields where animals were slaughtered. Meanwhile, cleverly layered throughout is a conversation around the nature of perception, utilizing concepts of varied myths to frame skewed perspectives.

There are a few of the expected plot points found in many YA stories. Most obviously, the love interest is a Judge. They have a standard but charming meeting and their romance follows the usual rises and falls. More unfortunate than this, the mysteries/secrets/weird events used as plot devices start to pile up, each individually becoming less effective for the mass of them. But, along with some nice pacing, there are also some nice surprises—which I will leave as nice surprises.

While some of the characters are a bit cut-out, many of them are cast in unique and unusual ways. The relationships between Wren and her family are familiar enough to lure a reader, and fraught enough to entangle. The turns they take help drive the story. Moreover, Wren is engaging as a character, and her journey is compelling. She is terrified of the enemy, which makes her courage more striking. She’s smart, inquisitive, and flawed. She feels real and this lends greatly to what ends up being a lovely read and a satisfying conclusion. 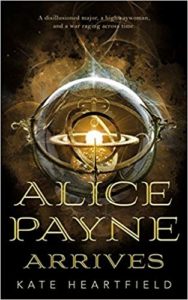 In Georgian-era England, Alice Payne is the daughter of Colonel Payne, a veteran changed for the worse by the war in America. Once wealthy and respected, the colonel is losing money quickly. Alice’s prospects for marriage have diminished significantly with her age and status. Alice, however, is strong-willed and adventuresome. She has no intention of marrying whatever low-ranking noble is foisted on her; besides, she’s perfectly happy with her secret lover, Jane. Alice dons a mask and makes herself into a highwayman, robbing the wealthy to keep her house.

Not quite “meanwhile” but “meanwhen” (in another place and time), Major Prudence Zuniga is caught in a time war between two ideological armies, the “Misguided” and the “Farmers.” Each side believes time travel should be used in a different way, and the two sides are incompatible. Ostensibly a soldier for the Farmers, Zuniga plots to destroy time travel completely in the hopes that the time travel war will end. To achieve her treasonous plan, she needs an individual who lives in 1788, a native to that time, one such as Alice, or maybe even Jane.

Alice Payne Arrives is a fun, fast story. The main characters are stubborn women of action. Chapters are short, making for a quick, always-moving read. The narrative starts with action, stumbles a bit through exposition, but smooths out early on. Light-handed social commentary with subtler depths makes for a thoughtful and thought-provoking but entertaining adventure.

For the science fiction fans: time travel. Despite the well-worn topic, this novella brings a few new, cool, sparkly ideas to the genre, melding some of them into a steampunk sensibility. There’s enough science fictional meat for people to argue over, while the backdrop sizzles with interesting, intelligent social ideas.

A great deal of the story takes place in 1788. The descriptions are convincing and the writing is confident, but remains unencumbered by overuse of archaic styles, keeping the read smooth and easy. Most of the prose is fairly straightforward, but strong dialogue propels the narrative, with occasional clever lines and sprinkles of great humor. While much of the tale is couched in a narrative voice of adventure—evoking The Count of Monte Cristo, for example—the story isn’t afraid to touch on the darker aspects of war and conflict. It simply does so without becoming entangled in the darkness. Better yet, and perhaps even more to the author’s credit, Alice Payne Arrives hits home with moments of genuine, effective emotion. 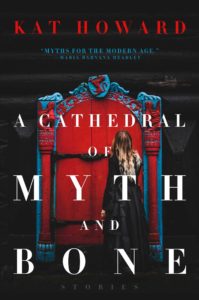 Kat Howard’s offering brings together different takes on myths and folklore. In the introduction, Howard tells us that “not every story here is a retelling of something older.” Nonetheless, the stories share a certain sense of the fabulous, the strange, and the strangely familiar. Readers far more schooled in the classics and fairy tales than I will find layered levels of engagement: There is a clear depth of knowledge and understanding on display here. Older tales and tropes are interrogated, turned inside out, examined with critical lines and clever strokes. But there is plenty—a cornucopia—for the casual dabbler as well, since so many of the stories in this collection stand as fine narratives regardless of precursors.

Perhaps unsurprisingly, transformation stands as a strong theme throughout. Myth and fairy tales often deal in transformations. But the how and the why of transformations are surprises in these journeys. The mundane and the magical meet, and the mundane is usually left behind. From a modern twist on miracles and divinity in “The Saint of the Sidewalks,” where a woman seeking a miracle becomes an unwilling dealer in miracles, to the hallucinatory “Murdered Sleep,” where a decision at a masquerade fantastique can change both the dancer and the world around her, familiar transformations lay new curses or empower in new ways.

There is also an unflinching examination of violence. This violence can take a variety of shapes; it can be bloody, but it can also be neat, hidden. In the striking and deceptively powerful “A Life in Fictions,” violence is an act of control, sometimes complicit, sometimes negotiated, where a man inadvertently vanishes his muse into his stories, to gently devastating effect. Violence can be revenge and claws, but it can also be obsession. It can be the act of claiming, of imposing one’s will regardless of the other’s desires. Violence is highlighted as a selfish, self-absorbed thing mistitled love, called to light in the deliberate, dark plot points of “Returned,” or in a simple, passing thought in “Breaking the Frame”: “I thought about what it would be like, walking out of death . . . and what if I didn’t want to go with him?” (Editors’ note: “Breaking the Frame” was a Lightspeed original short: lightspeedmagazine.com/fiction/breaking-the-frame.)

Some of the selected stories seem to follow few rules, focusing instead on the sensory, the lush imagery, and an exploration of mystery. Characters in certain tales might be wanderers stumbling through a narrative. In fact, “The Speaking Bone” is more about than being any particular individual’s story. But the imagery in these stories is consistently strong, the ideas are genuinely fascinating, and the dialogues created by them are socially important: control, power, gender—strength and loss; how we live with ourselves and each other. Moreover, wonderfully structured tales such as “The Calendar of Saints” and more traditional, linear narratives, such as “Dreaming Like a Ghost” are proof of an incredible range of storytelling technique and mastery of character.

I have my (very minor) occasional quibbles. And of course I have my favorite stories. But this really is a book you should explore for yourself.