This month, I’ll be reviewing the short story collection Starlings by Jo Walton, the novella collection The Tangled Lands by Paolo Bacigalupi and Tobias S. Buckell, and the novel The Fairies of Sadieville by Alex Bledsoe. 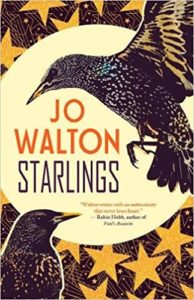 In her introduction to Starlings, Jo Walton writes, “For ages I felt like a fraud, because my short stories were either extended jokes, poems with the line breaks taken out, experiments with form, or the first chapters of novels.”

Indeed, most of the stories in this collection can easily fall into the above categories. Some feel like half-sketched ideas. Others start off promising, but end just when they start to get interesting. It’s like stumbling onto a writer’s journal.

But in this case, it’s Jo Walton’s journal, and I will still read it, because the ideas in this are gorgeous.

In “Jane Austen to Cassandra,” the well-known author’s correspondence slips through a time loop to address Cassandra at the Fall of Troy. “The Panda Coin” follows an Eritrean coin as it passes through several characters’ hands, giving us a snippet of their lives. “Remember the Allosaur” has a theater agent trying to persuade his client, an actual dinosaur, from auditioning for Hamlet. This story had a punchline that took a couple of minutes to hit, but when it did, it knocked the breath out of me. On the other hand, “A Burden Shared,” where a family physically bears a daughter’s chronic pain, was heartbreaking to read.

Some stories I would have loved to see expanded into longer works. My favorite story in the whole book, “What Would Sam Spade Do,” is a typical noir with a Sam Spade protagonist called to investigate the killing of a clone of Jesus of Nazareth. Not only the suspect is a Jesus clone, but also so is the protagonist. (Side note: The plural of Jesus is Jesi.) I was genuinely disappointed when it ended. “Sleeper” has a biographer communicating with a virtual version of her subject, who may have been a Russian sleeper agent. “Relentlessly Mundane” is the usual spin on how children who have slipped through portal worlds deal with returning home, but Walton left me wanting more.

And there are others that are obviously Walton playing with style and form. “Escape to Other Worlds with Science Fiction” is a series of vignettes set in the Depression Era interspersed with newspaper headlines. It has no plot, and yet, seeing the science fiction authors highlighted among such hardship gives interesting insight on what makes SF so escapist. Another story, “The Need to Stay the Same,” is a fictional book review written from a post-human point of view, and “Three Shouts on a Hill (A Play)” is indeed a play about story that had me chuckling. And, of course, there’s the poetry, which ranges from biological (“Not a Bio for Wiscon: Jo Walton”) to fairy tale (“Three Bears Norse”) to outright silly (“The Godzilla Sonnets”—Walton seems to have a thing for dinosaurs and Shakespeare).

If you love short stories that have well-defined conclusions, this might not be the best collection for you. With that said, Walton’s stories, even in their brief, incomplete forms, are a master class in studying technique, form, and ending stories with zingers such as from her story “Parable Lost”: “There’s everything in the universe in this story; except answers.” 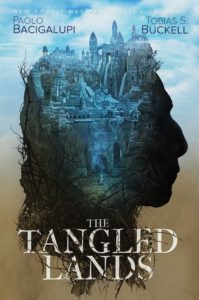 Paolo Bacigalupi and Tobias S. Buckell have teamed up again to bring us back to the country of Khaim in The Tangled Lands. This book pairs their initial novellas, “The Alchemist” and “The Executioness,” with two new stories, “The Children of Khaim” by Bacigalupi and “The Blacksmith’s Daughter” by Buckell.

The land of Khaim is overrun by the Bramble, a thorny invasive plant that grows in the presence of magic. Anyone who brushes against the plant falls into a sleep, which, unchecked, can deepen into a coma and eventually death. Despite this, the people of Khaim continue to prolong its existence by sneaking in magic spells, risking execution.

In “The Alchemist,” a technique is invented to destroy the Bramble, but instead of using it for good, the ruler corrupts it for his own greedy use. Considering we live in a world when corporations and environmentalism clash, this one hits a little close to home. The truly sad thing is that the Alchemist’s corruption of his invention has long-reaching effects into the other stories.

“The Executioness” is the strongest story of the bunch and my favorite. When a butcher takes over her father’s executions, she is pulled onto a path of reluctant legend as she pursues her kidnapped children. It pairs two world-views: those of Khaim, who still use magic despite it destroying their land, and the Paikans, who feel the only way to eradicate the Bramble is to shift people’s dependence away from magic. Also, it was thrilling to watch the Executioness go from an awkward axe wielder to having a kind of confidence in her own moniker.

“The Children of Khaim” has a young boy desperately searching for a cure for his sister who has fallen to the Bramble sleeping sickness. The boy must deal with the ethical quandary of either mercy-killing his sister, or caring for her and draining their resources. Either way, he experiences loss of innocence, and although this story ended much better than I thought, it’s still a harrowing read.

“The Blacksmith’s Daughter” is probably the bleakest and most violent of the four. A young woman is forced to create a set of armor for a duke’s son who only gives them half the money to buy materials. I had a hard time with this one because the protagonist is trapped in an unsolvable situation, where the lives of herself and those she cares about can easily be snuffed. Her lack of agency and the subsequent consequences of her choices are hard to read.

The Tangled Lands does not offer a solution to the Bramble crisis. Life is stark and grim, and there are no true happy endings. Yet, despite this, I found the book surprisingly hopeful. Resistance in the face of a corrupt government and broken systems can take many forms. Even though the characters live in constant fear, they all find ways to resist, even if it’s just standing up for doing what’s right. In today’s climate of distrust and fake news, it’s both devastating and yet encouraging. 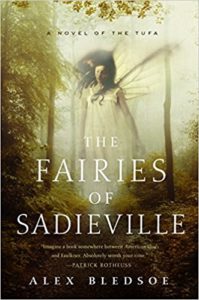 Alex Bledsoe continues to weave music and magic in the latest in his Tufa series, The Fairies of Sadieville. As with his previous books, you don’t need to read them in sequence, yet many characters from the previous books do make an appearance: war veteran Brownyn Hyatt and her pastor husband Chess from The Hum and Shiver, C.C. and Matt from A Chapel of Ease, Bliss Overbay from A Wisp of a Thing, and Mandalay Harris from Long Black Curl. Bledsoe gives just enough of their backstory to cement their place in this new story, and whet the appetite to learn about them in their own books.

The Fairies of Sadieville starts off with Justin and Veronica, a pair of grad students who are passionate about their studies and each other. After Justin’s advisor dies, they come across an old film in his office showing a girl seemingly turning into a fairy. They learn that the film took place in the mining town of Sadieville, a town in Tennessee that was the focus of a catastrophic accident. They decide to go to nearby Needsville to do further research, and in doing so, unearth a secret that will uproot the Tufa’s lives as they know it.

I love Bledsoe’s portrayal of relationships, from Justin and Veronica’s relationship as a mixed couple (Justin is black, Veronica Puerto Rican), to the longing between C.C. and Matt, to Brownyn’s and Chess’s more mature love. Justin’s presence is a nod to African-American roots in bluegrass, and it is interesting to see how he interacts with people in the South. However, Justin and Veronica are only catalysts for the true heart of the book: the Tufa realizing they may have a chance to return to their homeland, Tir na nOg, which they were exiled from long ago. Would they do it? What of those who aren’t Tufa? Would they be left behind?

Toward the end, it felt like Bledsoe lingered a little too long on different Tufa reactions, but I still enjoyed watching the Tufa wrestling with this possibility. I also enjoyed the flashbacks of Sadieville’s past, and even the time when the Tufa first arrived into what is now Appalachia. And, of course, most of all, I love how this book is infused with music—the Tufa are constantly singing and playing instruments. When you read this, arrange to have bluegrass playing in the background. It won’t invoke the magic of the Tufa, but it does put you in the right mood.

Note: On January 11, 2018, Alex Bledsoe noted on his blog (bit.ly/2FtsT1y) that The Fairies of Sadieville will be the last book of the Tufa series.