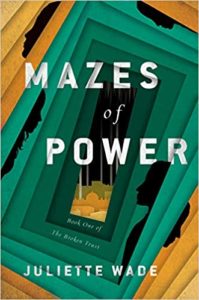 With our country the way it is today, one would think that a fantasy novel focused on political intrigue wouldn’t be so much escapism, but more like reading today’s news. Yet Juliette Wade’s debut novel, Mazes of Power, not only dives deep into political intrigue, it focuses a sharp lens on the relevant issue of what one can do with power, for good or for ill.

As the oldest son of the First Family in the Grobal Caste, Tagaret just wants to hang out with his friends and try to catch a forbidden glimpse of the beautiful girl, Della. However, after a fever epidemic kills the current Eminence, Tagaret’s father plans to nominate Tagaret as a candidate for the next Heir to the throne. Eleven Families are also vying for their sons to become Heir, so Tagaret must be ruthless, relentless, and possess the sharp, cutting wit of a rapier to win allies who will vote for him.

Unfortunately for Tagaret, he possesses none of those attributes. His younger brother, Nekantor, does. Unfortunately, Nekantor is a sociopath.

Nekantor is obsessed with power, both the gaining and the wielding of it. But he also obsesses over rules. Doors must always be unlocked. Glasses should be full or empty, never between. Everything must remain in its proper place—servants, the lower castes, women, even his own mother. Nekantor will do whatever it takes to play the game, as he calls it, and Tagraret slowly comes to the realization that only he could stop Nekantor from his ambitious plans.

Wade’s novel is being promoted as sociological science fiction, and after you read it, you can see why. Mazes of Power contains an underground world strictly drawn along class, race, and gender lines. Crossing any of those boundaries can bring dire consequences. Loving someone of the same sex or of a lower caste is seen as betraying the pure blood of the Grobal caste. However, this society doesn’t function as well as it would like. Inbreeding among the Grobal caste has made them susceptible to disease. Bare touch is taboo, becoming either a sign of intimate vulnerability or a risk of contagion. Toxic masculinity abounds. The castes do not encourage true friendship, but token alliance for the sake of gaining prestige for your own caste.

But there are those who are fighting to change the culture, such as Lady Sekemi, Tagaret’s cousin, who is attempting to use her influence to push for equality for women. There’s Aloran, a servant/bodyguard assigned to Tagaret’s mother, who does his best to serve and protect her from her abusive husband. And there’s Tagaret himself, who begins to see the inequities around him, particularly as it not only affects Della, but also his best friend and secret lover, Reyn.

However, the strongest character is, surprisingly, Nekantor. While he is cruel in his quest for power, Wade also includes scenes that make him vulnerable. His obsessive-compulsive disorder can drive him into frenzies that isolate him from his friends and family. Instead of disabling him, however, it helps him detect patterns that no one else can see, and it allows him to take chances that Tagaret would never consider. He is brilliant and he is dangerous. Tagaret knows this, yet if he is to stop him, he must learn how to play the game as well. But that doesn’t mean, however, that he has to play by the same rules.

Here is where Wade truly shines. Every action Tagaret and Nekantor take is a play for power in a system that’s rigged for the privileged. Is it possible to break that system and bring in something new, or is it doomed to break under its own weight? She could have easily written the two brothers as one fully good, one fully evil. Yet she intertwines the strengths and flaws of both, bringing the story to a captivating and complex ending that made me eager to read the next book in the series. 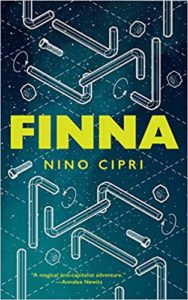 I have a confession to make: The reason why I picked up Finna is because, growing up on the south side of Chicago, kids around my neighborhood used the word “finna” all the time (I finna go to the store, you need anything?). The novella Finna, written by Nino Cipri, has nothing to do with Black slang, but is a story about second chances and multiverses that also pokes fun at big box stores. So it’s still a win for me.

Ava and Jules both work at LitenVärld, a Norwegian furniture store that bears a certain resemblance to another gigantic blue-and-yellow store in this world. At the start of the story, they are in that awkward, unpleasant stage of breaking up with each other after a brief but intense dating relationship. When a young woman loses her grandmother in the store, Ava and Jules are given the task to find the lost customer. They also learn, to their surprise, that their store has a problem with wormholes, and the only way to track the grandmother is a device called the finna, which is used to find a target in multiple dimensions.

The story is told from Ava’s perspective, who, on top of dealing with feelings of insecurities and anxiety, has to deal with being around Jules, who is still sore from the breakup. Their bickering is painful to read, as neither can say anything without hurting the other.

But as Cipri shows, relationships don’t have to remain stuck in one place. There are infinite choices and infinite ways things can change. Ava and Jules learn that they themselves are constantly in flux, and it’s the choices they make that can determine how their relationship goes. As they move from one world to the next, and their surroundings turn surreal, they get to see their true selves and learn how to interact based on that. This is particularly true for Jules, who has always felt out of place back in their own world, being a transgendered child of immigrant Jamaican parents who uses the pronouns they/their. The worlds become a reflection of the different possibilities that are out there ready to be explored.

Truth be told, I wish the story was longer so we could explore more store universes. There’s one that’s downright Lovecraftian that was simultaneously horrifying and hilarious. But overall, this was a story about Ava and Jules, and I enjoyed it. Relationships are indeed messy and they can be filled with regret. I’ve had my share of times when I thought, “If I only did this, I could be doing that.” I’ve even wondered if there is an alternate me out there living out my best life . . . or worst life (although I’m pretty sure there’s a me out there who is playing bass in an all-woman band called Unbelievably Pregnant). But possibilities are everywhere, not just after the choice has been made. And though there may be some who would find the ending not all that happy, I found it very optimistic and positive. The only person you can change, really, is you. 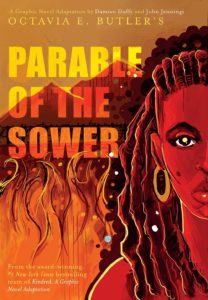 The first time I read Octavia Butler’s Parable of the Sower was back in 2012. I thought I had read it in college, but as I noted in my Goodreads review (bit.ly/2QbW7Io): “If I had, I would have remembered sitting up all night unable to sleep.” The book unnerved me mainly because of how plausible it could be in real life. To take another line from my review, “Butler’s dystopia is a lot farther, and yet a lot closer, than we think.” These days, I feel that statement even more.

This is why, when I learned that John Jennings and Damian Duffy were adapting the book into a graphic novel, I rushed to immediately get a copy. Jennings and Duffy are the team who brought Butler’s book Kindred to graphic form, and the artwork in that was so haunting, so visceral, it enhanced the story in a whole new way.

A quick caveat: The review copy I received was unfinished—some scenes were still sketches, and the book was in black and white, unlike the finished copy, which will be in full color. But even unfinished, I could read the full story and get the gist of what they were going for, particularly the emotion in the characters’ eyes.

For those who have not read the book, Lauren Olamina is a teenager who lives in a walled neighborhood on the West Coast. The cost of gas is too high, so nearly everyone walks or bikes. Employment is hard to come by, and crime has ramped up to new levels. Lauren and her family do their best to get by in their neighborhood with their own garden and homeschooling, but Lauren foresees disaster and tries to prepare everyone for the day when their home would be breached. No one believes her, however. Not until it is too late.

Seeing the hard parts of the story in graphic form drives home the tension and the dread, but also the fierce will to survive and even thrive in a world gone mad. We see the stubborn will of Lauren’s father to provide his children a safe and a mundane life, even if it is short-lived. We see Lauren’s desperate attempts to save her family as well as wrestle with the burgeoning faith within her. We see the disaster that breaks her family apart and sends Lauren on the run. It’s one thing to read the story, but it is particularly chilling to see Lauren’s horror upon viewing the flames of her home. But we also see tenderness between her and the older gentlemen Bankole, as well as the protective grace as she gathers new friends and family after losing the old.

Of course, Earthseed, the formation of her religion that will eventually take mankind to the stars, is splashed all over the pages. Here, it’s a teenage girl’s musings, scattered along with thoughts from her journal, which is used as narration. One nice touch in the graphic novel is that these appear handwritten on blue-lined school paper; reassuringly familiar and yet a disappearing resource in this world where many people are illiterate. Also, I never appreciated just how diverse the characters were in their ethnicity and backgrounds until I saw them in the graphic novel. Jennings does a wonderful job in capturing their distinct personalities—from Lauren’s tough-as-nails visage that masks a frailty in her hyperempathy disorder, to her younger brother’s brashness, to Zahra Moss, one of Lauren’s neighbors who is initially shown to be quiet, but displays street smarts when she and Lauren are driven from the neighborhood.

These days, when I walk around my neighborhood, I wonder how long it will be before things will get bad enough that people start erecting their own walls for protection. Parable of the Sower is a frightening read, and yet, reading it again in graphic novel form, I can now see that no matter how bad things get, you can still cultivate hope. And that’s something we definitely need during these turbulent times.