In 2012, Linda Nagata’s self-published novel The Red: First Light became the first self-published novel placed on the Nebula ballot for Best Novel. Later, Nagata resold the book to Saga Press, which has since published Nagata’s entire trilogy. For this month’s review column here at Lightspeed, we’re going to take a look at each of the installments of the Red Trilogy—The Red: First Light, The Trials, and Going Dark.

As a note of disclosure, I published a related story from Nagata in my anthology, War Stories: New Military Science Fiction. In addition, I will note that there are spoilers for the entire trilogy in this review. 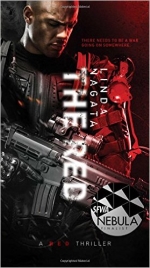 The Red: First Light is an ambitious, sometimes scattered, but excellent novel. Nagata uses her time to focus on a wide range of relevant topics: corporate warfare, the emergence of an AI from our technology, the impact of wartime trauma, cybernetics and post-humanism, political separatism in the United States, and even the ways in which we communicate through social media. In the hands of another author, any one of these topics would be a daunting task, but Nagata pulls it off triumphantly.

The Red: First Light opens with a soldier named James Shelley, deployed to some out-of-the-way outpost in central Africa, where he leads a small squad of soldiers in a never-ending corporate war against a local warlord. While he’s in the field, he gets premonitions of danger, which has him wondering if he’s being spoken to by God. When Shelley has his legs blown off in an attack that he seemed to know was coming, he’s ushered into an experimental program that gives him some advanced prosthetics, and he’s assigned to a specialized unit that is thrust into action soon after his training begins. Nagata’s written something truly interesting here: a novel about faith and religion in the trappings of a hard-SF military novel.

Shelley is a different sort of soldier: He’s an early adopter of a new technology called an overlay, which uses cybernetic augmented reality implants on his eyes, coupled with a skullcap, to provide him with a range of enhanced options out on the battlefield. It identifies individuals and targets for him, acts as a communications hub, and a bunch of other things. The skullnet is another piece of experimental tech that helps him even out his moods and cope with wartime trauma. On top of all this is a constant connection to a virtual handler, Delphi (who’s featured in Nagata’s short story here at Lightspeed, “Code Name: Delphi” (lightspeedmagazine.com/fiction/codename-delphi), who is an additional set of eyes and ears while he’s in combat.

After Shelley’s brought back and put into training with his new legs, the unthinkable happens: Coma Day. A series of nuclear weapons are detonated across the United States, targeting communications networks. The purpose isn’t mere terrorism: a Dragon—a member of the super-wealthy class—had ordered the strike against The Red, a machine intelligence that seems as though it’s been altering and shifting events for an unknown purpose. As Shelley and his team are thrust into the action, they’re put on a path that will change each of their lives.

One of the interesting things about this book is how the variety of technological ideas are interpreted by the various characters and in Nagata’s prose. Biblical and fantastic imagery is used throughout the novel, and it’s interesting to see how a hard-SF novel links together concepts like God and magic within a technological environment. While reading this book, I was reminded in no small way of the television show Person of Interest, which plays with a number of the same ideas: One character in the show refers to an AI as a God, and many characters in this novel do as well. Even more chilling, Shelley seems to have been selected by the Red to carry out its larger plans and from its viewpoint in the Cloud, and he’s guided through challenging situations and put through trials that test his own resolve and health, only to emerge from the other side a changed person.

Just as exciting is Nagata’s ripped-from-the-next-five-minutes future. She’s clearly been reading up on what the military world of the future could look like, and this is a military futurist’s dream. Soldiers are outfitted with exoskeletons called Dead Sisters that help them move around, and they use high tech gear like skullcaps, farsights, drones, handlers, and more. Nagata extends this off the battlefield, and looks at how this technology bleeds over to the civilian world. Nagata focuses on the technology, but in a casual way, as fixtures of this future, rather than obsessing over it. The result is a world that looks very much like our present. This is a book that sits comfortably alongside other recent military thrillers, such as Ghost Fleet by August Cole and P.W. Singer or Karl Schroeder’s Crisis in Zefra and Crisis in Urlia, each commissioned by the Canadian Army Land Warfare Centre.

Ultimately, The Red: First Light’s core story is one about one single concept: Duty. Shelley is groomed as a specialized soldier whose job is to protect the country against threats, internal and external. He and his squad come up against corruption and personal challenges that test him every step along the way, and he has to ultimately decide how to best serve his country. 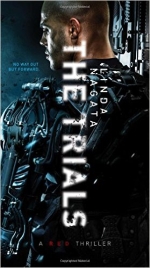 James Shelley’s adventures continue in Nagata’s follow-up novel The Trials. After the actions of the First Light mission, the Apocalypse Squad is put on trial for their actions. They’re charged with treason for delivering an American citizen to a foreign trial. They know it, too: Their aim is to break open the story of corruption that’s present in the country, and by doing so, they’re publicly martyring themselves before the country.

The Trials is a weird book—it feels like it should almost be three novels, because it splits into three parts nicely—and over the course of the triptych, it becomes apparent that these are designed like episodes of a television show or serialized novel. In the first, the Apocalypse Squad goes on trial. We see that they’ve made a much greater impact on the United States than they thought: There are protests in their favor, and they’re ultimately pardoned for their crimes. After that, they’re discharged from the military and released. Shelley returns to New York, where he meets Delphi, and Nagata explores some of the aftermath of what Shelley’s been through. It’s one of the few times I’ve seen wartime trauma really addressed, and addressed well.

Nagata returns to the larger story at hand after this episode: Shelley and his team reunite and are recruited to work for the private firm that had sponsored the First Light mission. Their task is an extension of their original mission: prevent another Coma Day. They’re sent on a whirlwind mission to track down several remaining nuclear warheads, which leads them across the country and over the Atlantic Ocean. In the final act of the novel, Shelley is brought into another mission, one that takes him into Earth’s orbit to track down one last nuclear warhead.

While The Trials is a scattered novel, it’s not a disorganized one, and between it and First Light, a larger picture has begun to emerge. Shelley has been chosen to help make the world a better place by helping to eliminate one nuclear weapon at a time. It’s an interesting choice: Decades after the Cold War, the threat of nuclear annihilation is largely forgotten, replaced by fundamentalist terrorism and climate change as the next major threats that face the world’s society. Shelley has grown somewhat in the course of those two books; he’s developed a greater sense of morality, which guides him when faced with complicated problems. He reminds me quite a bit of Jim Holden from James S.A. Corey’s Expanse series: someone who’s optimistic and with a simple vision of good and evil, which cuts right through the clutter in the world. 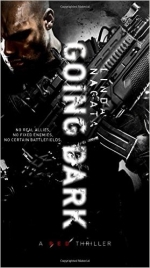 The last installment of the trilogy, Going Dark, is as exciting as its predecessors, but ultimately doesn’t quite live up to what First Light and The Trials promised. The novel jumps to eighteen months after the end of The Trials: Shelley is now a member of ETM-71 (Existential Threat Management), a squad organized and directed by the Red and designed to prevent humanity from doing something that’ll wipe out the species. The novel opens with the team accidentally kicking off a war in the arctic, and we see that there are cracks beginning to show in how the Red accomplishes its mission—it can be fooled, manipulated, and ultimately, controlled. As Shelley and his new teammates are assigned to new, increasingly dangerous missions in the Middle East, they have to come to terms with what the Red really is, and how it determines how to protect humanity.

It’s here where we really get to dig into how the Red functions: It’s an intelligence, but it’s not necessarily an individual. It has motives, but parts of it might function against itself. It might be a marketing program run amok, or it might be something else entirely. We see Shelley and his team work for it because they firmly believe in what it’s doing—to the point where they’ll abandon their loved ones. At the same time, they begin to learn there are people willing to take control of the Red so that they can rule the world.

Ultimately, Nagata is playing with some enormous concepts—concepts and ideas bubble over in these three books, but the focus of the trilogy can be distilled down to a key point: Humanity is a self-destructive species, sacrificing long-term survival for short-term wealth and power. The books make a collective point that this shortfall ultimately leads back to how a select group of individuals can drive the world to destruction pursuing their own goals, and that to save the world, there needs to be a larger revolution that changes the balance of power. Nagata doesn’t quite go this far: Shelley’s adventures are episodic and deal with crisis after crisis, but the implication seems clear. Shelley’s story comes to an abrupt and not entirely pleasing halt, and much of the momentum, questions, and points that Nagata comes up with just . . . fizzle out. There’s potential to this sort of story that is missed, and we’re left without answers to a bunch of key questions: what is the Red’s end game? Why was Shelley chosen for his role? How does this story end? These questions hold the trilogy back from being truly great, but it’s the journey that counts. On the whole, The Red trilogy is an excellent work of science fiction, depicting a future that seems all too plausible and providing us with an incredible amount to think about as we go about our technological lives.