Greetings, bibliophiles, and welcome back to another round of reviews! This issue we’re going to talk about three books that share a common setting, a setting steeped in imagination and longing, a vista that’s inspired writers ever since we got up off the ground and started staring at the night sky. That’s right, we’re going to space!

Out of all the settings in the stories I read, outer space holds a special place in my heart (and I suspect in many of yours as well). It is a place of infinite wonder, mystery, and possibility; a realm of O’Neill cylinders and Dyson shells and the endless lure of a frontier expanding to the edges of our universe. Space is the possibility of other intelligence, of finding we aren’t alone in our lonely arcs amongst the stars, of growing and learning as a species by pushing back the veil of ignorance. Space is a binary sunset, a singularity sky, a plentitude of glories we all dream of witnessing.

Simultaneously, space is also cold, harsh, and unforgiving, a void so vast that light itself takes years to reach us, and whose touch is inimical to our very existence. Space is double-checking the seals on your suit for pressure integrity, and then checking once more to be sure. It is the staggering complexity of inescapable math, thrusts and vectors, inertia and mass, fuel and distance—all the tiny little details that each offer their own particular way to go catastrophically wrong. Space is an entire map of “here be dragons,” a warning to stay where it’s safe and comfortable lest ye be consumed by Things lurking in the Dark.

And yet, despite all that, we still dream of leaving our planet and exploring those implacable depths because we know that the dream is possible. As a species, we’ve taken our first steps into space, put people on the moon and in orbit, built satellites to plumb the mysteries of physics and the cosmos. We have robots on Mars, probes out past Pluto, and each of these steps, though comparatively tiny, builds off all the steps we’ve previously taken. Each of these steps is a breakthrough derived from humanity’s cumulative knowledge, a reminder that we can accomplish greatness if we find a way to work together, and that impossible feats can be managed if we simply dare to try. Every story in space, regardless of the particulars, is a story about humanity itself, because to even get there means we’ve accomplished the remarkable.

Space is our greatest opportunity, and our greatest challenge, and that is why I love it. Go hug an astronaut. 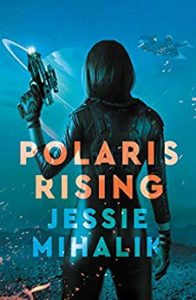 The first book I present to you is Polaris Rising, by Jessie Mihalik, and this one was an incredibly fun read. The review copy provided me billed itself as a “sci-fi romance,” but while there is definitely a romance element between the protagonist and main secondary character (which, don’t worry, is well-written and believable), this book is primarily a fast-paced action-adventure with a strong female lead who does just as much rescuing as her compatriots, and the various twists and turns kept me entertained the entire way through.

Set in a universe where three rival Houses control nearly everything in a multi-stellar polity, Polaris Rising is the tale of the fifth daughter of one of the houses, Ada von Hasenburg, destined for a loveless arranged marriage to an arrogant man-child. Ada, however, isn’t one to be bound by destiny. Instead of submitting to her fate, she steals a bunch of stuff, eludes the captors intent on claiming the bounty on her head (placed by her own father), and generally acts like a badass space pirate straight out of Star Wars or Firefly.

That’s all before the book even starts, by the way, and it only gets better from there, as she’s forced to team up with one of the most dangerous men in the universe in a tense relationship that has multiple ways to end badly. This relationship actually highlights one of the things I really enjoyed about Mihalik’s writing, as instead of portraying Ada as a helpless damsel needing to be saved by her knight in shining armor, it instead casts her as a fully capable warrior in her own right who refuses to be steamrolled by those who think she should do what they think is best for her—a rarity in SF action adventure.

The stakes in the book are also excellently constructed, with Ada initially worried only about how to keep herself alive, but quickly finding herself drawn in to much deadlier games, leading to a thrilling conclusion, and I am quite looking forward to the sequel to see where things go next, as it seems Mihalik has plenty more adventures in store for Ada and company.

Read if: you like David Weber’s In Fury Born; you enjoy rollicking space adventure; you want a bit of beefcake to liven up your aristo-corporate intrigues. 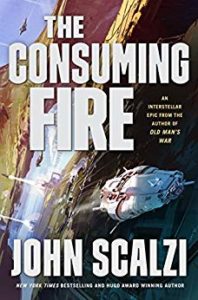 Next up we have The Consuming Fire, by noted SF author and burrito criminal John Scalzi (full disclosure—John and I are Twitter Friends). Much like the first book in this series, The Collapsing Empire, The Consuming Fire is filled with snappy dialogue, a memorable cast of characters, and an overarching scope that manages not to get bogged down in superfluous details while still keeping a feel of vastness.

One of the things that I really like about Scalzi’s books is that they’re very approachable, and The Consuming Fire is no different. He lays out key concepts and ideas in easily understandable chunks, which means the majority of the book isn’t about how many kilowatts a Blorble Blaster needs to fire thirty rounds, but rather how the people holding the Blorble Blasters interact with each other and what that means for their world, and in The Consuming Fire, the world is rapidly falling apart.

One of the key foundations of any interstellar empire/polity/society is its ability to communicate and travel, and the central conceit of Scalzi’s series is what would happen if that ability to communicate and travel slowly disappeared. Furthermore, the way in which things are falling apart is occurring so slowly and esoterically that most people don’t want to believe it’s happening, because to address the problem would mean drastic shifts in societal and financial standing (closely mirroring our current issues with climate change and our dwindling amount of time in which we’ll be able to address it), and Scalzi’s characters are just as believable and complex in their throne rooms and corporate offices at handling the truth of their world as our CEOs and presidents in reality.

Of course, that doesn’t mean the book is simply a series of dry philosophical exchanges between pacing figures. There’s plenty of action in The Consuming Fire, including attempted assassinations, space battles, and all the associated violence one expects with something as minor as the downfall of society, all of which works to heighten the book’s tension and underlying issues rather than detract from them. I’m very curious to see how Scalzi ends his series, as several important plot points appear to be building to one heck of a climax, but after reading both The Collapsing Empire and The Consuming Fire, I have faith he’ll bring it all together in a satisfying conclusion.

Read if: you like science fiction focused more on the people than the gadgets; you enjoy snappy quips and dirty words; you prefer to experience civilizational collapse solely in literary form. 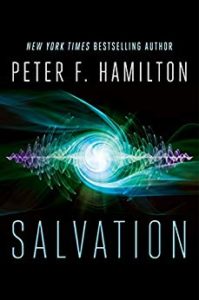 Our final book in this month’s review is one by an author I’ve greatly enjoyed reading over the years—Salvation, by Peter F. Hamilton. One of the reasons I like Hamilton’s books so much is that for the vast majority of authors, a world is something they create to tell a story. It’s important, since it’s the backdrop upon which everything takes place, but the focus is generally on whatever idea or concept the author felt they wanted to convey.

Hamilton, on the other hand, is one of the rare few who creates a story so he can tell you about a world, and it is a very difficult feat to pull off in a way that leaves the reader entertained. Most who try it get mired in the complexities of worldbuilding, relaying detail after detail in a way that illustrates how carefully they’ve thought through the interactions between whatever exotic technology they’ve introduced and how it might realistically be used, while completely missing the point that city-planning is generally saved for college courses and late-night Sim City sessions and isn’t necessarily compelling reading on its own.

In Salvation, the story itself is well-written, consisting of chapters alternating between two timelines—one a detective thriller about the hunt for an alien infiltrator, the other a coming-of-age tale about children preparing to fight an implacable threat, with the two coming together at the end masterfully—but it is the world Hamilton writes that takes center stage, surrounding and enveloping each character in a mantle so perfect you can close your eyes and instantly envision yourself there. Don’t get me wrong, I was fully invested in the characters and how their arcs progressed, but in this book, much like Hamilton’s other books, the protagonist’s face is not flesh and blood, but rather rain-drenched streets, alien service corridors, family habitats, and impossible vistas on unimaginable worlds. To read Salvation is to inhabit another place, and leaving the book left me wanting more of that place and what happens to the people inside it.

Fortunately, Salvation is only the first book in what looks to be an ongoing series (Hamilton usually writes trilogies), so I’ll have at least one more chance to revisit its fascinating locales. Fair warning though, Hamilton’s books tend to introduce quite a lot of concepts fairly rapidly, so don’t be surprised if you have to go back and read a page or two several times to make sure everything groks.

Read if: you enjoy the intricacies of third-order consequences as it relates to infrastructure; you like whodunnits; you want to go live somewhere else in your head for a while.

That does it for this month, folks, have fun out there and remember to dream big!