Let’s try some alliteration this month. Two of my favorite fantasy authors recently released their latest works, and entertainingly, their names both begin with B, and their books’ titles begin with S. They’re also fantastic epic fantasies that build on the worlds that they’ve respectively created, and interestingly, both deal with main characters that have a singular, driving instruction: kill someone they love. 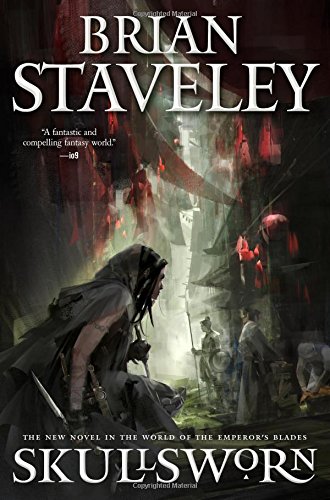 I’m not typically one for epic fantasy, but Brian Staveley won me over with his Chronicles of the Unhewn Throne trilogy in recent years. I appreciate his realistic approach to the subject matter, depicting the Annurian Empire as a practical political entity, with fairly rational characters working to alternatively uphold or topple it. Like most epic good fantasies, it’s a story set in a world with plenty of space around the edges, and with Skullsworn, Staveley has given fans an interesting opportunity to continue to explore it: he picks up one of the side characters from his trilogy, and places her front and center in the middle of a standalone adventure. It’s his version of Rogue One, a Star Wars Story.

The central character in question here is the Skullsworn assassin, Pyrre Lakatur, who shows up in the trilogy to aid the main characters. She’s a smartass, confident character in the first three books, and Staveley takes the time to explore her origins. She’s a novice priestess who worships Ananshael, God of Death, and at the start of the novel, she’s undergoing her final test: Kill ten people in as many days, including someone that she loves. Along with two mentors, Ela and Kossel, she travels to a literal backwater city, Dombang, located in the Shirvian Delta, where she hopes to reconnect with someone she once shared a connection with, and then kill him.

Staveley has used sociopathic characters in his earlier books, and it would be easy to portray a badass assassin in a similar mold. Pyrre is far from sociopathic, though, even if she isn’t bothered by racking up a considerable body count. She’s faithful to her god, carrying out his will. Her mission, to try and find someone to love—truly love, not just bed for the night—is one that fills her with considerable doubt, given how difficult it is. At one point, she goes to a temple for a goddess of love, and curses her out, saying that her god is at least reliable: Everyone dies. Not everyone gets the chance to fall in love. And killing someone is easy, but understanding her god’s true nature is far more difficult.

Along the way, Pyrre instigates a revolution in Dombang to get closer to Ruk, the man she has in her sights. This allows Staveley to dip once more into his world’s politics and society. This is a treat, getting to see more of the Annurian Empire in action. Nestled at the edge of the Empire, the city has ancient, violent roots that were suppressed with the Empire’s takeover. The city is a nice fit for the Skullsworn, filled with deadly creatures, residents, and something ancient lurking in the swamps that kills anyone who stumbles across them.

Pyrre’s journey in this novel is one that takes her from an inexperienced novice to someone who is the far more confident when we see her in later installments of the novel, and Staveley pieces together an origin story and prequel that actually functions well. Pyrre’s growth as a character feels honest: As she kills various Dombang residents, she goes through an un-straightforward journey, and Staveley adds in some welcome twists and turns to make her an even more compelling character than when we see her in the series later on.

Ultimately, Skullsworn is a rewarding Unhewn Throne entry from Staveley, and a solid model for fantasy authors to emulate. The book presents not only a good character study (and there’s more standalone novels to come from Staveley in the near future), but a rich exploration that broadens the world that he created. 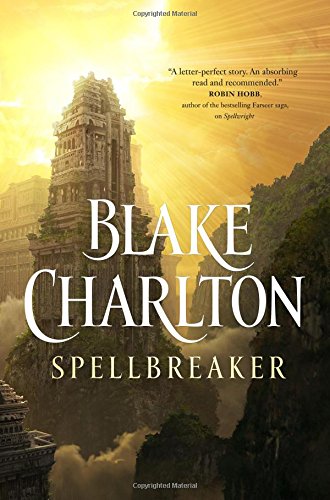 When I first started writing and reviewing science fiction and fantasy novels, one of my earliest reviews was that of a new author, Blake Charlton, with his debut novel Spellwright, and later, his novel Spellbound. In those two novels, he introduced Nicodemus Weal, a dyslexic wizard who misspells his spells, often with dangerous or deadly results. The first two novels set Nicodemus up in the midst of a fantastic world with an impending magical threat that could threaten to destroy the world.

Spellbreaker finishes off the trilogy. It had a rough journey to reach print last year. Charlton’s editor left Tor, orphaning the author and trilogy, and there was a five-year gap between the publication of Spellbound and Spellbreaker, in which time Charlton became a practicing surgeon. That gap, however, seems to have served the book well when it came to story, because it feels as though it’s the most mature and best installment of the trilogy.

Spellbreaker takes a giant leap into the future: Nicodemus and his wife Francesca DeVega have had a daughter, Leandra, who is now a Warden of Ixos, hunting Neodemons that come back from the old continent, forbearers of the prophesized invasion that Nicodemus fought against. She obtains a prophetic spell that shows her several potential futures: She will kill someone she loves, or she’ll die herself. If she flees, everyone she cares about will die. This sets her down on a predictable path: Trying to find a way out of it, and coming to terms with what’s to come.

Charlton never strays far from Leandra’s story, and there are times when this book feels a bit overstuffed. It feels like it could have easily been a sequel to Nicodemus’s arc, and that we missed a book along the way. We’re treated to a complicated family drama that plays out as each of the characters try and figure out what’s to come next. The family hasn’t been together for years: Tensions between Francesca and Leandra keep them from speaking to one another, while Nicodemus and Francesca’s respective duties have kept them apart as well. The book spends a considerable amount of time getting the family together, getting them over their problems, and tackling the much larger ones. It’s a long and complicated book—one that certainly can’t be jumped into right out of the gate—but it’s ultimately rewarding as the narrative progresses. While Charlton gets back up to speed, we follow Leandra as she herself gets back together with her parents, learning more about her own textual, divine nature, the prophesy before her, and her role in the events that started with her father. Ultimately, it’s a story about a family’s bonds, and her journey is an incredible one that takes her from an angry young woman to someone who’s willing to sacrifice everything she knows to remake the world.

Along the way, Charlton reintroduces his vivid and fantastic world. The strongest parts of Spellwright and Spellbound have always been his conception of magic, where words and sentences have incredible power, and magic is conducted through these spells (spelled properly, of course). There’s a nice meta-feeling to this, as a fantasy author creates magic through words of his own. Where the first novel was a fun start to the series, Charlton has built upon his world, and by the time we reach Spellbreaker, he’s running with all cylinders firing. Fans of Max Gladstone’s Craft Sequence will find much to like here, with an incredibly nuanced take on how magic works, and how devotion gives various gods their inhuman abilities and existence.

Charlton throws in plenty of surprises. It’s easy for authors to follow a rote path for characters caught up in a prophecy, but it’s notable that he manages to find alternatives along the way, making his characters struggle as they fight to save one another, but also to change the world in unexpected ways.

Both of these novels do two things incredibly well: they expand their worlds in interesting and in non-cosmetic ways, but retain a compelling character journey that heightens the emotional core of the novels, and by extension, the books that precede them. It’s a difficult task, but both authors pull it off fantastically.