Greetings, friends, it’s time to cram another fresh installment of book reviews into your salivating eyeholes. Now, I must confess, this month I only have two reviews for you, but both of them are beyond excellent, and while I wouldn’t consider them light beach reading in the way a Koontz or Patterson thriller-by-numbers is, if you make time to read them (read both, read both!) I think you’ll be more than satisfied with the time spent.

The thing is, what that word “family” means to someone can be very complicated. For one person, it might mean warm nights inside watching the snow fall past the windows while Grandma bakes cookies. For another, it might mean angry voices arguing over where the money’s being spent. For some, it means the absence of those who were once there; for others, the addition of those unexpected. It’s the people who are there when you least expected them to be, and the people who let you down when everything matters most, the diamonds and daggers that pierce our hearts in a multitude of ways that can only ever be personal.

Family is a messy, beautiful, dangerous, delicate thing, and no two families are ever the same, and I think that’s what I liked most about these two books. They’re about family, about the triumphs, the tears, the tiny interactions that change us every day whether we realize it or not, and what we do in response to it all. Sure, there are floating alien spacebeasts and godlike superpeople on the pages, and the books might be listed under science fiction, but I’ve always felt the best SFF not only transports us to another world, it then makes us realize that world was a part of our own the entire time. 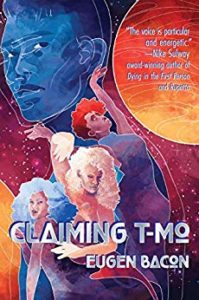 For our first review, I’d like to draw your attention to Claiming T-Mo, by Eugen Bacon, because it is one of those books that I suspect will stay with me for quite a while. The book revolves around the titular character, T-Mo, but is told through the perspectives of three generations of women, all of whom are tied to T-Mo in some way, and while T-Mo is the name on the front, the story itself is very much the story of Salem, Silhouette, and Myra, and how the singularity they orbit influences their lives.

From the very start, Bacon’s writing reminded me a lot of China Miéville’s, a luxurious tapestry of words that can seem intimidating until you let yourself fall into their cadence and structure, almost like high-diving into a thesaurus. Heady concepts are quickly illustrated and then left to linger in your imagination, a sort of literary shorthand that doesn’t draw your attention to how many light-years a teleporting meta-human can travel at once, but rather to how the alien creature plucked from the shores of Betelgeuse might smell as it’s prepared in the kitchen for dinner. Is it digestible? Of course it’s digestible, because the important thing isn’t the nitty-gritty of gastrointestinal relations, it’s the nitty-gritty of personal relations. It’s about what such an act reveals about the relationship between two people, and how the tapestry of their lives might be woven through such acts (and their sudden absence).

The structure of Claiming T-Mo unfolds in spurts and fits, jumping from past to future, from one perspective to another, but never in a way that feels confusing. Instead, it recalls the oral tradition of ancient storytelling, where the act of describing one part of the tale necessitates a tangent explaining another, disparate puzzle pieces sliding together into one cohesive whole, rich with backstory and necessary motivations. I never felt like any of the chapters left me adrift or were there simply for the sake of wordcount—each is short, anywhere from one to five pages, but packed with motivation and meaning for the ever-evolving family.

I would be remiss if I also didn’t point out that a major subtext in Claiming T-Mo is loss, whether it be the loss of a father, the loss of a child, or the loss of innocence itself. Bacon, however, does not craft loss as an ending, but rather as a stage in one’s existence, something to be acknowledged and absorbed, dealt with as best as possible (which sometimes is not very well at all), but always a catalyst for change. It’s this underlying current running through the book that I think is what pushes it from good to excellent, as many of the situations the characters have to deal with are very clearly drawn from real world experiences many people find themselves subjected to, and Bacon handles them with grace and aplomb.

Overall, Claiming T-Mo is a book packed with so much love, fear, pain, and hope, that it invites multiple re-readings, and is good enough to justify the time spent doing so.

Read if: You like seeing words that don’t get used very often; you’re okay with non-perfect families trying to get by; your family issues include teleporting demi-gods. 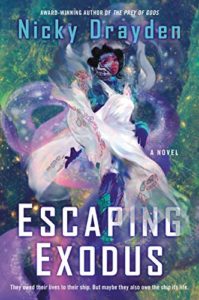 The second book I have for you is Escaping Exodus, and it’s by an author I’ve reviewed before, Nicky Drayden (you can find my review of Temper in the Oct. 2018 issue of Lightspeed). I am pleased to say that Drayden continues to excel and improve as a writer, and throughout the entirety of reading Escaping Exodus I was struck once again by her ability to create fantastic settings that feel as real as stepping onto the street outside.

Escaping Exodus is the story of Seske Kaleigh, daughter of the clan matriarch, who wants to and expects to lead her people, but hasn’t taken her studies as seriously as she should have, instead choosing to spend time with her best friend, a member of one of the lower classes, much to her mother’s dismay. Now, when I write that previous sentence like that, you might think, “Well what makes this book so special? I’ve heard the ‘wastrel prince/ess has to learn about life the hard way’ plot before.”

Ahh, but what if I told you that the world Seske and her people live in is inside a living beast as big as a moon, floating through space amidst a herd of other beasts, and that they simultaneously harvest the beast to keep themselves alive while trying to prolong the beast’s life for as long as possible? And that Seske was supposed to be an only child, yet has a sister her mother clearly favors for the throne? Add to that a social system ripe for disruption, terrifying secrets about what the life of luxury Seske enjoys is actually built on, and forbidden loves around seemingly every corner, and I think you’ll agree that Escaping Exodus is a potent brew indeed.

One of the things I greatly enjoyed about Escaping Exodus was how Seske’s relationship with her family, and who she considers her family, morphs and changes throughout the book in very believable ways. Seske isn’t perfect, and she makes plenty of mistakes, but she perseveres through them as best she can, gradually shifting from a headstrong brat to a leader worth following. I also really enjoyed the undercurrent of environmentalism running through the book, because while the beast may be an entirely alien locale to live, it’s still one that requires sustainable practices to prevent outright destruction of itself and all those on board—a lesson we would do well to heed.

If there’s any complaint I had, it’s the same one I had with Temper—I wish Drayden would spend a bit more time on certain parts of the story, as I felt some stuff got glossed over a little too quickly (particularly as the book approaches the third act), but that’s a personal quibble and in no way did it mar my enjoyment of the book. It’s more of a problem of wanting the buffet to be bigger when it’s already a fourteen course meal, because I guarantee you, Escaping Exodus has more interesting ideas than many trilogies I’ve read.

Overall, Escaping Exodus is another fine entry from a clearly talented writer, and I hope you’ll take the time to give it a read.

Read if: You ever wondered what it would be like if the Millennium Falcon decided to live inside that asteroid worm; Afrofuturism is your jam; you think killing your home might be a bad idea.

Well, that’ll do it for me for this month, and thanks everyone for tuning in. Enjoy your summer!