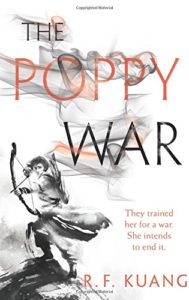 The Poppy War by R.F. Kuang is a fantasy epic set in the Nikara Empire, a country inspired by twentieth-century China. The narrative utilizes contemporary language, bringing the reader into its setting with an effective, readable style. The story gets to work immediately, offering an engrossing opening and a likeable protagonist.

Runin Fang (called Rin) is an orphan in a backwater town. She helps run her adoptive family’s illegal opium business. Her path is set out for her, but she has no desire to be married off. She wants to enroll at the prestigious military academy in the nation’s capital, Sinegard.

Overcoming the disadvantages of parents and poverty, Rin passes the rigorous entrance exam. She leaves her village behind to find that Sinegard presents a new set of terrors. She is ostracized by her peers, and especially by a boy who bullies her. She is castigated unfairly by her teachers. But she continues to fight, visualizing herself as a general in the army.

The truth of Nikara is that it’s falling apart. The army Rin longs to join is run by vying warlords. The Nikaran Empress is making suspicious political moves. And the Federation of Mugen seems intent on starting another war.

From the outset, the text deftly explores racism, gender, and the fallacies of supposedly meritocratic systems. Not everyone has the same opportunities to prepare for the entrance exam. Women can join the academy, but very few make it. And Rin’s dark skin matters in a land that associates pale skin with beauty and sophistication. Relationships shift, Rin grows, and these explorations grow more complex.

Occasionally a fight doesn’t quite land, but as an action story with a martial arts flair, most sequences are entertaining, sometimes enthralling. Fight scenes stand as metaphors when seen through the eyes of a young girl who is growing into her body and wishes to enter a world of combat. In Rin’s struggle to survive Sinegard, she discovers the power of shamanism. She also discovers that anger fuels her power.

As a tale of a young girl’s coming of age, Rin’s decisions and their consequences are riveting. Conflicts are believable, and in Rin we are given an underdog hero that we can root for. Through her tale, cultural ideas are questioned with fearless sincerity.

A few overused plot devices blemish the narrative. All the same, The Poppy War entertains for those who want entertainment, and provokes for those who like their fiction meaningful. 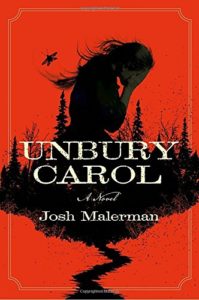 Unbury Carol features an independent, wealthy, forward-thinking woman named Carol Evers in a secondary-world dark fantasy western. Carol occasionally falls into a death-like state. Her heartbeat and breaths slow to imperceptible rhythms, and she feels like she’s falling, but she retains consciousness, experiencing the real world mostly through sound. Carol has kept her condition a secret, so her husband Dwight conspires to bury her alive.

Dwight has to convince the townsfolk of Harrows—the sheriff, the mortician, and others—that nothing is amiss. In many ways, he’s a classic sort of villain: despicable, if somewhat bumbling. Besides the money, his perceived emasculation at the hands of a wife who was never submissive drives him to murder. As he deceives the townsfolk and spirals around madness’ drain, he paints a wonderful depiction of desperation and paranoia.

Meanwhile, Carol’s former lover, the retired outlaw James Moxie, hears of Carol’s impending funeral. Knowing she will probably wake up, he leaves his house in Mackatoon to ride to Harrows. Moxie is the most famous outlaw around, primarily based upon a single gunfight in which many believed he used magic. His youth leeched from his body by the years, and the weight of regret deep in his bones, he is determined to save Carol or die trying.

But a third character is out to stop him: Rot. An entity of unknown nature, Rot wants Carol to be truly dead, and he employs a number of tricks to try to stop Moxie.

On the one hand, Unbury Carol puts forth an interesting conspiracy, with interesting conflicts, in an interesting setting, utilizing a narrative voice that is somewhere between folktale and legend. There’s nicely layered tension, especially at the outset. And while I wouldn’t call this horror (perhaps “weird fiction”), a helpless protagonist at the mercy of her callous husband who plans to bury her alive—well, some people will find the story terrifying.

At the same time, so much of it takes place through introspection and reflection, so many of the challenges to the characters are psychological, that movement in the plot is slow. Furthermore, while the narrative voice is interesting and fairly unique, the point of view weaves in and out of heads, making surprises seem more like “cheating” than clever turns.

This book is probably not for everyone, but patient readers will find it a worthy title. From themes on redemption to literary touches of Poe to moments of great imagery and language, Unbury Carol has a lot to offer. 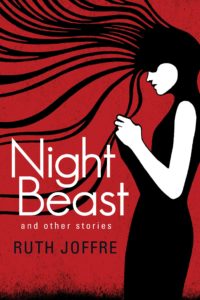 Ruth Joffre’s debut collection Night Beast is both familiar and strange, and often as startling as it is beautiful. The settings are places we’ve known. The people, our relatives and friends, our neighbors. Unencumbered, occasionally gorgeous literary narratives reveal truths in stark moments.

“Go West, and Grow Up” presents an engaging discussion of gender amidst an engrossing depiction of Americana rarely seen. When a young girl’s mother leaves her drunk husband on the side of the road (after living in a car for a year), the two endeavor to drive from Ohio to Oregon. They are impoverished to the point of washing in gas station bathrooms. They have to negotiate their relationship with each other while unsure of their next meal, the gas in their tank, or even their safety. Details make the experiences real; unexpected turns lend power to a poignant coming-of-age story.

In “The Ithaca Moment,” a young woman on winter break runs into the guy to whom she lost her virginity. Present clashes with the past in an awkward afternoon of need and exploration and loneliness. What follows is real, believable, and captivating.

Strongly drawn characters form a strange friendship in “General, Minister, Horse, Cannon.” A tenth-grade girl meets an immigrant boy who may be a genius, or may be deluded. Cultures clash, parents cast judgment, and the narrative becomes a courageous exploration of desperation through the eyes of the innocent.

To call these “stand-out” stories is tricky, since most of the stories in this collection are notable. Also tricky: It’s light on genre content. Of the eleven pieces, one is speculative, another is potentially speculative, and a third could be called “flirting with speculative.”

“Nitrate Nocturnes” is set in a world where everyone is born with a timer which counts down to the moment they will meet their soulmate. Fiona’s timer tells her she’ll meet her soulmate when she’s sixty-four. She struggles to deal with waiting while friends and lovers find their soulmates. Then, historically unprecedented, her timer jumps, changing her life in unpredictable ways.

In “Safekeeping,” a woman is stranded in a safehouse, a technological marvel. She is locked up by a man who may be protective, or just forgetful. She battles loneliness, doubt, and possibly madness.

Finally, “I’m Not Asking” dabbles in the fantastic. A couple copes in the aftermath of a miscarriage. Desperate to stay together, one of them loses herself in a fantasy of a floating hotel that follows the sunset. Regardless of a tenuous relationship with science fiction, this piece is lulling, intimate, and absolutely amazing.

It may be light on speculative content, but this is a collection worth reading. It includes a story selected for a Master’s Review Award by Kelly Link and another published in Lightspeed. Genre can only hope that Joffre will continue to explore the possibilities of science fiction.

Arley Sorg is co-Editor-in-Chief at Fantasy Magazine and a 2022 recipient of SFWA’s Kate Wilhelm Solstice Award. He is also a 2021 World Fantasy Award Finalist, a 2022 Locus Award Finalist, and a finalist for two 2022 Ignyte Awards: for his work as a critic as well as for his creative nonfiction. Arley is senior editor at Locus Magazine, associate editor at both Lightspeed & Nightmare, and a columnist for The Magazine of Fantasy and Science Fiction. He takes on multiple roles, including slush reader, movie reviewer, and book reviewer, and conducts interviews for multiple venues, including Clarkesworld Magazine and his own site: arleysorg.com. He has taught classes and run workshops for Clarion West, Augur Magazine, and more, is scheduled to be a guest at both Cascade Writers and the Odyssey Writing Workshop, and has been a guest speaker at a range of events. Arley grew up in England, Hawaii, and Colorado, and studied Asian Religions at Pitzer College. He lives in the SF Bay Area and writes in local coffee shops when he can. Find him on Twitter @arleysorg. Arley is a 2014 Odyssey Writing Workshop graduate.