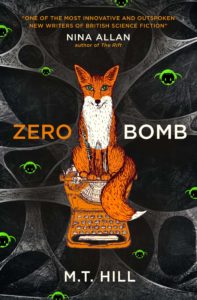 Zero Bomb is, at the outset, gently unusual and carefully elegant. It starts slowly, deliberately, capturing mood and moment in evocative lines, many of them gorgeous or poetic. Word choices and sentence structures work to build a complex, tightly energetic set-up. Once this is accomplished, the story flows, plunging Remi into strangeness and misery.

We meet Remi in a near-future England. The loss of his daughter, Martha, has wrecked him. He struggles to rebuild his life as a cycle courier, and the struggle is deeply introspective. The story focuses on moments of depressive and occasionally surreal beauty, filigreed with interesting science fictional ideas. Concepts of self, doubt, perception, and so on are thoroughly explored. And then the conspiracy begins.

Remi has strange encounters, mostly with strange characters, including a driverless car trying to run him over. And here the sense of Remi and his place in the story is similar to someone wading too deep in the ocean, where the tide rises and smashes and nearly drags you away. The read requires patience, as Remi floats or, more often, is pulled through the weird and the seemingly random. He spends considerable time mired in confusion, and the story swirls a while in that lingering depressive sensibility. Eventually, an offer is made: join the cause and you can see Martha again.

But there is much more to the story than this. What begins as depressive introspection becomes an innovative, complex, layered book, one which is best experienced fresh and unprepared. In other words, this novel is best read without spoilers. There are a number of other reviews which lay out the book in a more forthcoming way. I submit that the jacket copy is intentionally opaque: a large part of enjoyment with this one comes from discovery, and from the surprising directions the narrative takes.

All the same, the jacket promises a “science fiction mystery that asks: what do we do when technology replaces our need to work?” The plot doesn’t function like a mystery and the question proposed is more of a set piece (or perhaps setting) than something the story attempts to thoroughly tackle. Remi’s England is a nation of automation and surveillance, and he is faced with the decision to join an organization which may be comprised of spies or anti-technology terrorists. At the heart of this story are relationships—especially the choices we make in them as individuals connected to other people—and our roles as people both within society and within families.

Zero Bomb is filled with commentary, irony, and symbolism. It’s intelligent; in fact, it’s probably working on levels that I don’t understand. This doesn’t entirely matter. It’s still a fascinating novel, one which goes to unexpected places; and it stands as very different from anything I’ve read in a long time. 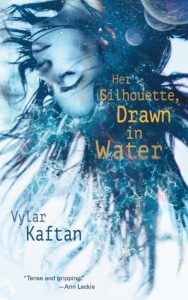 The opening to Her Silhouette, Drawn in Water is immersive and intense. From the beginning the reader is thrust into the sensory experience of being a prisoner in a system of dank caves on some distant planet. Bee is trapped here, and she has no memory of how she ended up here or even why. She lives alone in the darkness with her lover Chela, a strong woman who is the better climber and spelunker. Chela’s memory isn’t damaged the way Bee’s is. But Chela is less than forthcoming about their past, insisting that to remember is to hurt, and that they have to keep moving forward to survive.

What Bee does know is that she is a powerful psychic, perhaps one of the most powerful, and that her powers have been locked away as part of her imprisonment. As Bee and Chela argue with each other and work together, as they scrounge for food and ration their light, Bee slowly starts to doubt her lover—as well as herself. In doubting, she wonders if she can break free, not only of the prison planet, but of the lock keeping her powers at bay. Chela encourages her to stay, to make the most of the planet, and to love her the way she loves Bee. The more Bee wants to escape, the more desperate Chela becomes, certain Bee will get them killed.

The strength of the novella is in the language and the characters, not to mention occasionally captivating moments and gorgeous lines. Descriptions are wonderfully vivid, conversations are bright and real, and the characters feel like people you may know. The experiential nature of the narrative and Bee’s emotional journey are compelling, both providing more than enough reason to read this novella.

Roughly the second half of the story presents a shift, a kind of soft chord change. The general feeling of the narrative remains familiar but the personal complications deepen, the goals are new, and Bee is challenged in fresh ways. Obviously the story is a discussion on reality and perception. But thematically the narrative is more consistently a focus on relationships, especially the push and pull, the ways we give to each other and help each other. It’s also about healing and wholeness, growth. The way it unfolds is intimate, Bee’s personal diary in a sense, and is, in fact, arguably about personal journeys, their importance to one’s sense of unity and self, as well as their importance to the people close to us as well as the larger world around us. 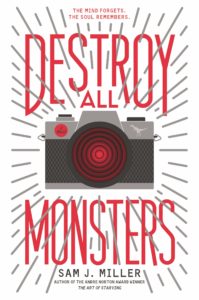 Solomon is crazy. Everyone says so, even him. Solomon sees dinosaurs in the trees. He sees pterodactyls in the sky. He sees magic everywhere. He’s also one of the two point-of-view characters in Destroy All Monsters.

When Solomon and Ash were younger, they experienced something which changed them both forever. Ash fell out of the treehouse, slammed her head on the ground, and woke up with no memory of what happened. Whatever it was potentially sharpened Solomon’s craziness, simultaneously blocking out his memory.

Now in high school, Ash grows more and more desperate to help her best friend. Solomon sleeps under bridges and disappears for days, only to return to tell her about “the other Ash, the one who is a princess.” Ash is caught between wanting to maintain the love and trust of her dearest friend, and doing the sorts of things that may be in his best interest, but which may jeopardize their friendship, such as calling child protective services. Meanwhile, she has her own clinical depression to deal with, as well as an escalating conspiracy of vandalism centering around students, which seems to grow in danger with each event.

In the world called Darkside, a different kind of conspiracy is bubbling. Othersiders—those who are not quite like the majority, those strange individuals with powers—are being harassed, beaten, and are sometimes even disappearing. The nearly-catatonic princess Ash may soon come under threat. Solomon must find out who is behind the rise in violence, despite his own powers never quite surfacing. He has to help save his people, save his dearest friend Ash, and somehow find a way to bring her back to full consciousness.

Destroy All Monsters is immediately tender, with an intimacy of friendship that is both startling and beautiful. The main characters have real-life problems, and the narrative never flinches. Even as a non-fantastic literary story about two kids struggling with high school, family, and the terrible events that can happen along the way, this book would be a marvel. Layered into this literary narrative is the fantastic. This layering empowers what might otherwise be a “victim” character—Solomon—to become a hero in a parallel tale. Two protagonists, two overlapping narratives, two friends in a serious struggle to help each other and their worlds.

That alone is enough reason to read this book. But there’s more: there are moments of social commentary; there’s an ongoing dialog around otherness, paranoia, and persecution; there is the fact that the entire piece is a love letter to photography (and perhaps by extension, artistic expression). There’s a real sense of journey—a journey which incorporates some of the expected, but also holds a few truly lovely surprises. And there’s this theme of finding your own voice, your own vision, of discovering who the people around you really are; a theme which in some hands becomes sappy or trite, but in this narrative is played out wonderfully. Most surprisingly, through it all, through the trauma and violence and the struggle with reality, there is love, and I do mean the very best kinds of love.