This month, we review Gods, Monsters, and the Lucky Peach, by Kelly Robson, and Ambiguity Machines and Other Stories, by Vandana Singh. 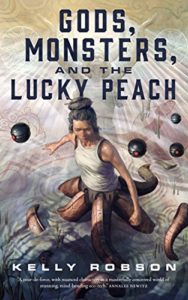 In 2267, most of Earth’s populations live in underground complexes. Ecological disasters have rendered the surface fairly inhospitable to human habitation.

Minh has devoted herself to restoring rivers in “habs,” helping to repopulate small zones above ground. She can squeeze funding from the institutions that control the world, she can dazzle fellow scientists with theories and results, but there’s only so much she can do with what’s left of natural Earth.

When the secretive organization running excursions to the past announces a river remediation project, Minh puts everything on the line to apply. Time travel, though, presents a host of new challenges. Despite being out of her depth, she has to convince them that she is the best for the job. If she wins the bid, she just may have to live through the dangers of the past.

Meanwhile, in ancient times, a king must face a monster and maneuver against the priestess who works to ruin him . . .

Gods, Monsters, and the Lucky Peach is ruthlessly genre. Readers unfamiliar with a host of genre terms and concepts may struggle. Even some genre readers may stumble at the blending of tropes. But unapologetic immersion lends wonderful confidence and believability to the telling. For readers who can run with the concepts, sparkling ideas abound. Those ideas become relevant, they participate in the plot, and are rarely (if ever) gratuitous.

Throughout the tale, character goals feel true. Well-structured plotlines intersect. But this novella goes further than simple craft accomplishment. As the plot progresses, the narrative utilizes future and past—science fiction and historical fiction—to engage readers in a host of topics, connecting each idea to story, yet never falling prey to the lure of proselytization. Bioengineering, medical self-care, global and national economics, gender, sexuality, the ethics of killing, and more—each idea is given context, never out of place or weighing down the story. If science fiction is a conversation of ideas, here the reader is warmly invited into conversation(s).

Add to these an intriguing conflict between eras and a gorgeous, balanced depiction of ancient times . . .

While this seems like a lot, thematically the story pulls everything together as a clear meditation on the human condition, specifically through variations of human experience. Most importantly, Gods, Monsters, and the Lucky Peach is a considered piece on the ways in which we interact with and respond to the challenges of life.

Well worth a read. 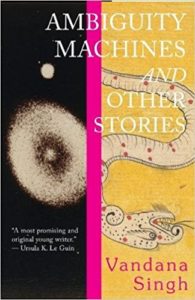 Ambiguity Machines and Other Stories is not the place to turn to for tightly plotted action-adventures delivered through the familiar beats of movies.

It is, however, a great place to go for well-composed sentences and paragraphs, for tales crafted with a distinct sense of place and time, and for immersion into stories rich in setting, character, and meaning.

The stories in Vandana Singh’s collection range in time and place: near and far futures, near and distant pasts; from populated cities to villages to desolate reaches; life on spaceships, life on other worlds, and even life beneath our own seas. They utilize a cast with diverse outlooks and beliefs. They often mingle the spiritual with the scientific and the science fictional.

As a body of work, it’s through thoughtful and moving narratives on the nature of self and meaning in context with individuals, place, and even objects that themes of connection bind these stories together. Among the many evocative stories on offer are a few strong exemplars of this idea. “With Fate Conspire,” originally published in Solaris Rising 2: The New Solaris Book of Science Fiction in 2013, introduces the reader to these themes and styles through Gargi, who experiences connection through a strange means across time and distance, while living disconnected in a variety of ways from the people physically closer. “Peripateia,” from 2013’s End of the Road, explores Sujata’s connection to her mother, her lover, and reality, through an intelligent, theoretical, and careful exploration of grief and grieving. And “Oblivion: A Journey,” pulled from 2008’s Clockwork Phoenix: Tales of Beauty and Strangeness, explores connection within a sort of space opera, touching on colonialism and dehumanization, cruelty and conflict, cultural assimilation, dominance, and ultimately resistance.

Connection drives these tales from the beginning to the last story, the single and singular new piece of fiction, “Requiem.” In a tiny village in the northernmost reaches of the US, close to the North Pole, in a too-possible near future, a tech developer born in India and working in the US undertakes a journey to collect her deceased aunt’s belongings. She meets the indigenous and the non-indigenous, the scientists and the locals, and is courted by the head of a dubious energy company. At first blush, “Requiem” stands as ecological science fiction. On further consideration, it develops into a thoughtful exploration of culture and otherness, of celebration and mourning, and of the connections between living creatures.

These collected stories are occasionally raw, they are usually layered, and they are often beautiful, in setting as well as prose: “The sweaty, chemical scent of the dead river that lies like an outstretched arm across this nameless, foul city.” They delve into the dark, they rise into revelry, and throughout it all, they evoke a sense of truth in the human experience.