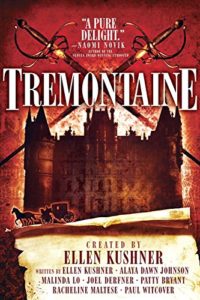 I don’t think I had the pleasure of reading Ellen Kushner’s Swordspoint, although I seem to vaguely remember reading Privilege of the Sword. Luckily, Tremontaine does not require previous reading of those two books because it’s considered a prequel to both stories, which is nice because it gives those like me a lovely entry into this fantasy world.

Tremontaine has been out since last year from Serial Box as a series of episodes you can buy and read. Season One has been gathered into a printed volume, which I’m reviewing here. The book is thick at 688 pages, but each episode/chapter is introduced with a lovely shadowbox illustration. In keeping with the episodic format, Kushner ups the ante by not writing this on her own, but has gotten several authors to collaborate with her in writing the story. The result is a cup of dark chocolate, rich and deep and intertwined with complex flavors.

Ixaab Balam, Kaab for short, a swordswoman trained in the spy arts, arrives in Riverside to aid her family, merchants who import chocolate. She becomes friends with Micah, a farmer girl who has a strong aptitude for numbers, and Rafe Fenton, a scholar who wishes to open a university of his own. She also eventually meets Duchess Diane Tremontaine, who is working to protect her name, her fortune, and her life.

Diane truly exemplifies the saying, “Every villian is a hero of their own story.” Despite the machinations she undertakes to keep the life she knows, I was surprised to find myself sympathizing with her . . . sometimes. It doesn’t help that the other characters’ goals interfere with her own: Kaab wants to make sure her family are the only traders the city gets their chocolate from. Rafe unexpectedly finds himself having a hot and passionate affair with the Duchess’s husband, William Tremontaine. Even Micah’s push to solve mathematical equations becomes a hindrance to the Duchess’s plans.

Tremontaine is notable for its queer romance. The book contrasts the fast, hot passion of Rafe and the Duke with the slow, romantic build of Kaab and Tess, the red-haired forger (oh, the chocolate making scene . . . so decadent). But really, it’s all the political maneuvers that move the story along like a curious clockwork dance, as all the characters work to attain their goals without the others getting in their way. The best example is the chapter “The Swan Ball,” a delightful tour de farce that, to me, is the pinnacle of the book.

At times, I forgot that the story was written by different authors. The ending was deliciously satisfying and . . . huh, this book has made me surprisingly hungry. I hope Season Two is just as satisfying. 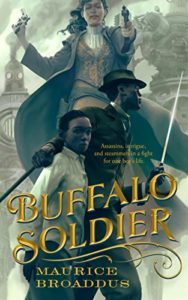 Black Steampunk. Yeah!!! I was so bummed I didn’t get a chance to review Nisi Shawl’s Congelese steampunk novel Everfair, so when I learned that Maurice Broaddus had also written a steampunk novella, I snatched it up. And oh, did it not disappoint. It’s not just steampunk, it’s western steampunk!

Desmond Coke, Jamaican member of the Niyabingi, a Rastafarian group of military radicals, is on the run with a young boy, Lij Tafari. On the surface, Lij is just a boy, like everyone says. But the kid has a secret: He’s been manufactured from the cells of an ancient hero. What does that make him? A weapon? A clone? Whatever he is, people want him for their own use. Desmond is there to make sure that doesn’t happen.

A lot of people want Lij, though. Chief among them is Cayt Siringo, a psychic detective who is trying to capture Lij for her unnamed client. Other people keep getting in her way, however, so sometimes she has to join forces with Desmond to keep Lij out of wayward hands so she can steal him for herself.

The novella is a short read, but a fun one. The setting is alternate history steampunk, but it was hard to pinpoint the exact time period. Sometimes it feels rustic dystopian. People travel by carriages or on foot and use folk healers. Desmond uses a sword cane to fight. But then again, there’s sign of advanced technology: Cayt uses two modified Colt Mustangs. There are steam-powered cyborgs. And, of course, Lij.

The first half has a wonderful western feel. The gunfight in the bar Redeemer (in the town Abandon) is fast-paced and fun. While the exposition leading up to it is heavy, Maurice breaks it up with the characters knowing this is all for show, and by showing the tension building in the bar patrons watching, waiting. The other half of the novel is compelling in its own right, as Desmond and Lij stumble into Wewoka, an eco-friendly city populated by the Niitsitapi, descendants of Seminole and African American slaves. Their pregnant leader, Kajika, treats her city with the same care as she treats her husband, Inteus, the captain of the guard: trusting in their ability to protect her, yet no-nonsense in her decisions to protect the ones she love.

But the most interesting things in this novella are the stories the main characters tell to Lij. Stories serve a function, used for dreaming, for warning, for passing on heritage. What is the purpose of these stories? For Lij to hear them? I found Cayt’s story about the boy who has Death as his Godparent most compelling. What will Lij do with these stories? How will they shape him? Or is his power drawing stories out of others?

Broaddus does a good job with the characters, portraying Desmond as a world-weary homesick traveller. Despite his life on the road, he manages to dress dapper. Cayt is fun, wild. Her skirmishes in battle are a joy to read. She contains secrets. When she reveals herself to Lij, it is poignant and makes me want to know more about her life. She’s just as world-weary and cynical as Desmond. I want to see more of the two of them together. And Kajika’s story of how she founded Wewoka deserves a tale in itself.

Of course, being a novella, the ending came all too soon. But as Broaddus himself says through Kajika: “No story ever ends, but sometimes the telling of it has to.” 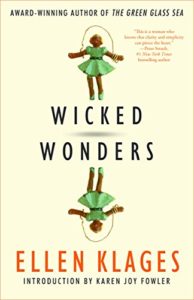 I first fell in love with Ellen Klages’s writing with her story “In the House of the Seven Librarians.” She was the writer who I wanted to be when I grew up, and I didn’t discover her until my late thirties. I snapped up her first short story collection Portable Childhoods. In Wicked Wonders, she continues her stories centered around women of all ages, with witty, sly, wicked, and poignant points that slip into your ribs when you least expect it.

Klages’s protagonists never settle for the status quo—from the opening story “The Education of a Witch,” where Lizzy is taken to see Sleeping Beauty and becomes enamored with Maleficient, much to her mother’s dismay (“she can turn into a dragon, purple and black, breathing green fire!”), to “Hey Presto!” where a British girl stays with her magician father, thinking she’s going to be bored, but ends up becoming captivated with his acts.

The stories range from speculative to literary to science fiction, with the emphasis on science. A children’s game of magic square becomes a means of escape in “Gone to the Library,” while the history of suet provides the catalyst for the “Sponda the Suet Girl and the Secret of the French Pearl” (which was a laugh-out-loud tale of a thief that gets his comeuppance in the most delicious way possible). Indeed, you can tell when Klages has fun with some of stories, such as “Friday Night at St. Cecilia’s,” where game night turns into something almost deadly absurd, and “Mrs. Zeno’s Paradox,” which must be read aloud for its side-splitting (pun intended) wit.

Other stories punch you with such poignancy it takes your breath. My favorite is “Amicae Aeternum,” about a girl rising up early on the last day in her home. Her going out to experience her town for the last time is slow as she takes in details, a meditation on experiencing things she will never see again, and when we learn why, it hits in a hard way. “Echoes of Aurora” is a meditation on the passage of time and impending loss through the love of a tree dryad. “Caligo Lane” is the story of an unusual cartographer who has a heart-wrenching quest. And “The Scary Ham” is probably the most straightforward story in the collection, and, it becomes apparent, the most personal story of Klages, I think.

The best part, for me, was the Story Notes. I’m a sucker for author’s notes on stories. They give an inside look on how stories are created, which is valuable for writers. It is like Ellen is right there with you, beer in hand, cracking wise on the wonderful and mysterious world that is fiction writing, and you want to follow her down into it, craziness, drama, and explosively beautiful moments all.