This month, you get not three, but four book reviews! I’ll be reviewing The Gameshouse by Claire North, Middlegame by Seanan McGuire, War by Michelle West, and Terminal Uprising by Jim C. Hines. 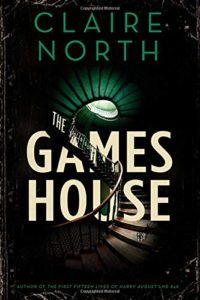 We are living in a golden era of games. There are stores that sell everything from board games to card games to dice games. Nicer ones have areas where you can go in the back and select from a library of games that you can play for free. There are conventions you can go to that center on games. You can even go on Twitch and watch people play. Games are entertaining. Games are fun. Games represent life. But how far can that go?

Claire North attempts to answers this in The Gameshouse. Previously written as three separate novellas, they are now being published in a single volume. The overarching story is about a mysterious house which holds games for people’s entertainment. But behind the cards and chips and dice, the gambling, the competition, and the losses, there is another game being played, moderated by The Gamesmaster—a mysterious woman veiled all in white. In this game, anyone can be a player or a pawn, the board could be played across countries, and the winnings could be anything from fame, better eyesight, passing off your physical ailments, or even gaining years onto your life.

In the first novella, The Serpent, we follow Thene, a young woman trapped in a loveless marriage to a gambler in 1610 Venice. He drags her to the Gameshouse to squander her wealth, but it is she who is offered a chance to join the higher league by playing a card game of Kings—except her king is a live person, a candidate for a seat on the Supreme Tribunal, and the only way she can win is to make sure her candidate gets that seat. The second novella, The Thief, switches to Remy Burke, who wakes up in Bangkok in 1938 to learn that he has wagered his memory against twenty years of his opponent’s life to play a game of Hide-and-Seek, with the board being all of Thailand.

As both Thene and Remy play to desperately win, we start to see themes common to both stories: The games they play aren’t balanced well. Thene and Remy aren’t given any advantages. But both possess a great desire to win, against all odds, which begs the question—is winning the game due to skill, or can it be done through sheer luck?

This is personified through Silver, the main character of the third novella The Master, who appears in all three stories. His goal to win the games goes far beyond the Gameshouse itself, and when he has his showdown with the Gamesmaster, entire countries, cultures, civilization itself become the board, its inhabitants mere pieces that can be removed in a blink of an eye.

How far can it go? Can’t a game be just . . . a game? I don’t think North fully answers this question.

This story reminded me of the plot of Ready Player One, which is supposed to remind us that games are supposed to be fun. But in North’s world, games are just an echo of the battle for dominance played out in politics, financial systems, and culture wars.

There is one quiet moment, though, where Silver, hiding from getting caught, spends the night playing arcade games with a singer on an overnight ferry. It’s a distraction, a reprieve, and ultimately, it also fits in with the nature of games. I think North’s message is that games should be played to win, but it is the game itself that should really matter. 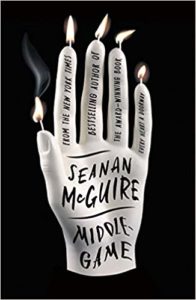 How can I describe Middlegame? At its heart, it’s a story featuring a pair of twins who learn how to become family to each other. But expand that—it’s a story about two kids trying to stop an alchemist from taking over the world. No, expand it further—it’s Order and Chaos. Words and Equations. Isolation and Community. Balance and Instability. Finally, throw in some time manipulation and wrap it up in a children’s fable that could also be the blueprint to the end of the world.

We learn that Roger Middleton is a prodigy, an adopted child who lives on the East Coast, and is “so in love with language that there’s no room in his world for anything else.” One day, he hears a girl’s voice in his head. This girl is Dodger Cheswich, who lives on the West Coast. She’s also an only child, an adopted child, a prodigy, and she considers herself “math-smart.” They don’t know how they’re able to speak to each other in their heads, but they do know they have the same color eyes, and they become best friends.

In truth, they’re the product of James Reed, an alchemist who created the two children to embody the Doctrine of Ethos—a philosophy of checks and balances that contains the power of the universe—one he plans to control. He is the one who has separated Roger and Dodger at birth so that they can grow apart while learning to manifest their destiny. He does this ruthlessly with the help of his alchemist-partner Leigh, who may as well be his own twin, her ruthlessness to his subtle cruelty, her ice to his fire. But Roger and Dodger don’t know this.

This book is a study on why we choose to tell people certain things. How it’s easy to isolate oneself, and how one can feel lonely even if you’re inside someone else’s head. McGuire writes Roger and Dodger’s relationship with such heart-breaking intimacy; although the two can communicate telepathically, they have misunderstandings. They make decisions that unknowingly hurt each other. They play into Reed’s game of trying to protect each other, and yet hurt each other. And as they grow, those decisions have consequences. It hurts to see the loss of trust. And yet it hurts when they try to work things out, to reconnect. It’s the most intimate portrayal of a sibling relationship I’ve ever read, and once they learn about Reed and his plans, as well as their true relationship to each other, the story ramps up into a nail-biting thriller you can’t put down.

And that’s just the story. McGuire’s use of language in this book left me both breathless and envious. She uses the language of fairy tales and myth, of cuckoos and jackdaws and crow girls, but also uses the magic of numbers and calculations to bring about the impossible.

I would not be surprised if this winds up on many awards lists. It’s incredible, and riveting. 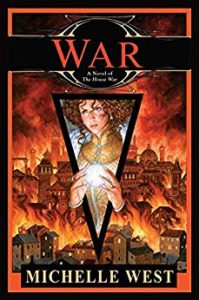 In February, I had surgery and had to stay home for two weeks to recover. During that time, I realized I wanted more than just a story. I wanted to read something meaty. Something the equivalent of comfort food. I wanted a story with characters I was familiar with, who were wrestling with challenges, who have grown throughout their own story. So I picked up War, the last (maybe) book in Michelle West’s House War series.

I was first introduced to Michelle West (who also goes by Michelle Sagara) through her novel The Broken Crown, her introduction to The Sun Sword Series. In it, she introduces Jewel Markess A’Terafin, a young woman who is able to see the future. Jewel (who prefers to go by Jay), becomes such an important character that she gets a series of her own: House War. It details her beginnings as an orphan living in the slums of Averalaan, becoming the leader of a gang of kids she calls her den, being adopted to House Terafin and struggling with newfound comforts along with political dangers, her rise through the ranks until she becomes the leader of House Terafin.

Though it had been a while since I read the series, I came across names that made me go, “Oh yeah, I remember that person.” Kallandras, the Master Bard. Meralonne, the wizard. Jay’s Den: Angel, Carver, Finch, Jester, Teller, and the long-dead Duster. Plus Evayne, the seer who walks the paths of time, appearing whenever she is needed, never the same age twice. There are also Winter Kings, Summer Queens, The Hidden Court, demons, and cats—albeit large, killer cats with wings that may not actually be cats at all, but powerful deadly gods (although like all cats, they find everything so boooooring).

Originally, the last book in the series was going to be book seven: Firstborn, but it instead turned into two books. With War, West wraps up not just Jewel’s arc, but ties in storylines woven through not only The Sun Sword series, but even the series before that: The Sacred Hunt.

I don’t think this review can do full justice. West’s books are by nature epic fantasy, and it’s hard to review the last book without referring to the whole series. What I can say is that at its heart, this is a story about Jay fighting to protect those she loves. There are sacrifices. There is loss. There are beautiful leaves. And there are courageous acts. War made me want to read the entire series again from start to finish, and now that it’s officially ended, I can. Unless West writes another series . . . 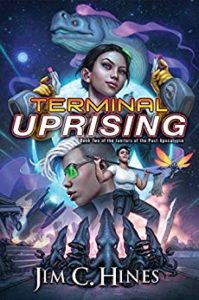 In 2017 (bit.ly/2NMznQd), I reviewed Terminal Alliance, a story about space janitors being pulled against their will into an interstellar rebellion. Now Jim C. Hines is back with the second book, Terminal Uprising. Unfortunately, I wasn’t able to read it in time for my February review, but did so during my time off. So, surprise! Bonus review!

Marion Adamopoulos, Mops for short, and her crew made up of hygiene and sanitation specialists are fleeing on the stolen ECMS Pufferfish after uncovering the truth about the benevolent Krakau, who claimed to have rescued and treated a portion of humans from a deadly contagion on Earth which turned all humans feral. In reality, it was the Krakau who had unleashed the plague that caused humans to go feral in the first place. Now, with the aid of Admiral Pachelbel, a Krakau who wishes to make amends, and a xenocidal Prodryan called the Advocate of Violence—Cate for short—Mops must travel back to Earth and risk her safety, her sense of self-preservation, and her sanity to investigate a rumor that there are humans who may have escaped, or even been cured from, the plague.

Hines’ humor continues in this book as well, interspersed throughout the story with Douglas Adams-esque alien poetry, lists, and rules. However, what really pulled me into the book was the characters. It was a joy and wonder to see Mops reconnect with Earth’s history. The antagonism between Cate and Wolf, one of Mops’ crew, is fun to watch, even as they learn to work together. And there is a loving shout-out to librarians and the work they do to preserve humanity’s past for the future.

I didn’t laugh as much with this book, and from the looks of it, Hines is setting the next book up to be more on the serious side, but I still I enjoyed it. Also, I now want an avatar named Libris in the form of a cat on my operating system.