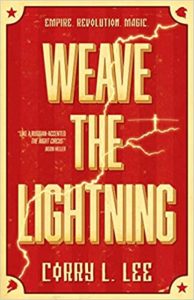 Corry L. Lee’s novel Weave the Lightning is an electrifying debut (pardon the pun) that infuses magical resistance with a Russian flair.

Celka works as a tightrope walker with her grandparents and cousins in a traveling circus. It’s good work that provides cover for their real occupation—aiding resistance fighters against the Tayemstroy, the Secret Police working for the state of Bourshkanya and its Supreme-General, the Stormhawk.

Gerrit is the son of the Supreme-General. He is part of the Stormguard—an elite fighting troop of weather mages who draw their magic from unique red-tinted lightning storms called bozhskyeh—God’s Breath. Being struck by this lightning is dangerous, but if a mage captures it correctly, its power can be imbued into any object or person. Weapons become more powerful. People can be healed. For many years, the Stormhawk has made it known that only the Stormguard can call on the bozhskyeh. Thus, at the beginning of the book, we see Gerrit training to get strong enough to survive the God’s Breath and please his father’s wishes.

But he has not met Celka, who is a secret mage and is also learning how to call the lightning to help the Resistance on her end.

To help them focus, the mages enter a trance called sousednia, a layer of reality that can reflect the mage’s state of mind or personality. For mages, there is a danger of becoming lost in one’s own sousednia, descending into madness. When this happens to one of Gerrit’s friends due to overzealous training by a sadistic general, Gerrit starts to unravel a layer of false truths wound tight around him, and even as he goes to train on his own, begins to learn that the war he is training for is not the real truth.

In fact, this whole book shows people living in multiple layers of reality. Under the police state, ordinary conversations can be charged with meaning. An innocent chat about coffee could have a double meaning of creating false identification for those fleeing the state. This means that trust does not come easily, and when Gerrit eventually meets Celka, they must learn how to unpeel those layers of distrust and disinformation.

Lee does a good job of showing their relationship, and although there is a moment that threatens to spill over to a standard love triangle, it doesn’t happen. She also has created a world that had me fearing for everyone—even the so-called “enemies.” And of course, right when the story really starts getting good, it ends, so you bet I’ll be reading the sequel when it comes out. 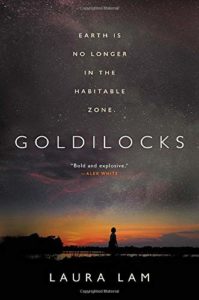 Laura Lam’s Goldilocks is another story that could easily become possible within the next few decades if our world continues on its trajectory of annihilation at our own hands.¬¬ It also shows that the world’s salvation rests on the choices people make, small or large.

Naomi Black is part of an all-female team of astronauts that steals a government rocketship to head towards a far-off planet deemed hospitable for human conditions. The reason for this theft is survival of the human race, who live on a planet that has become increasingly hostile and environmentally barren. But the women’s theft is also personal—as the world’s resources shrink, the men-led conservative government begins to strip women of leadership positions and also harassing others who refuse to step down.

Valerie Black, Naomi’s mentor and surrogate mother, is one of those women. It was her idea to steal the spaceship, and she who picked the all-female crew, including Naomi. Now they must race to get the spaceship to the new planet before the government stops their plans.

While Goldilocks is described as a thriller, I found it to be an intimate character study of two women who are not related by blood trying to save the world, but on their own terms. Naomi holds Valerie in the highest esteem and yet is trying to make a name for herself out from under Valerie’s shadow. And as they get further away from Earth, Naomi soon learns that even their idyllic crew can be torn apart by secrets and distrust.

Some reviewers are also comparing it to The Handmaid’s Tale in a spaceship, and while there are some elements of that, such as women being removed from positions of power, I didn’t feel there was a cultish vibe going on. The few men in the book—such as Valerie’s biological son—seem to be helping Naomi and Valerie. I also felt like some of the tense situations in the book became resolved a little too neatly. But I enjoyed the revealing of secrets, the ethical quagmires Naomi faced, and the overall tone of the book, which was that it is possible to save our world if we have care and empathy for not just ourselves, but for others who are not like us, and even for those who we would see as enemies. 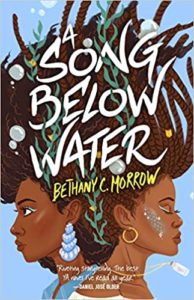 If there was ever a book that I would somehow put in a reverse time capsule to send to my thirteen-year-old self, A Song Below Water would be in that pile (along with a bunch of Steven Universe VHS tapes and everything written by N.K. Jemisin).

Tavia and Effie are playsisters—friends who are so close they may as well be sisters—who live in a world where fae powers are real. Tavia is a siren—a human being with the power to control people with her voice. The power only appears in black women, whom the world perceives as a threat. So Tavia must hide who she is, or risk having to wear a siren-prevention collar.

At the same time, there are signs that a traumatic incident from Effie’s past could happen again. Odd things happen, from Effie experiencing blackouts to a gargoyle perching uninvited on the roof of their home. And both Tavia and Effie are dealing with all of these things while trying to navigate high school.

I loved this book. It has mysterious gargoyles and mischievous sprites. It has resistance rallies and a Renaissance Faire (though it’s interesting a Faire exists when actual magical creatures also exist in this world). Bethany C. Morrow does an excellent job of dealing with dorky teenage awkwardness, from the discomfort of being talked about and wishing you were brave enough to talk back, to the body horror that comes from dealing with eczema, and in Effie’s case, her hair moving on its own. It is also unashamedly, unabashedly black. I resonated so much with many black culture shoutouts—from the hair culture (Yes, twists! Yes, headwraps!), to the games (I remember playing Red Rover as a kid), to the fear of being pulled over by the police.

Morrow manages to convey the fear and risk of black women being too outspoken in having all sirens be black women, and how people are threatened by their mere presence. A popular internet celebrity known for her hair tutorials reveals herself to be a siren, and the fallout from that is sobering. Woven throughout the book is not just fae mythos, but also Central African folklore in the form of elokos—people who appear to be super lucky and are able to charm people with a unique trill in their voice. Unlike sirens, they are not shunned for their powers, but are highly valued. Why aren’t elokos seen as a threat? Morrow does not offer an answer.

What she does include is a rich community of parents and grandparents who are looking out for Tavia and Effie. I also appreciated that these were not wise adults—there is a movement in this book to silence sirens—but there’s also another type of silence born from generational trauma, where the adults do not tell the kids history out of fear. The adults can be just as stupid as the kids, and that was a refreshing thing to see.

And yet, despite all this, this is a YA book, which means that yes, the world is falling apart, but there are priorities such as junior prom. As I write these words, we are entering a state of emergency in the country due to the coronavirus. It’s a scary time, but reading A Song Below Water showed me that there will be times when life feels out of control, but those times don’t last forever. And sometimes the unknown can be transformed into beauty that can change the world.