This month, we bring in a group of special reviewers to look at what’s new and exciting in the world of comics and graphic novels. 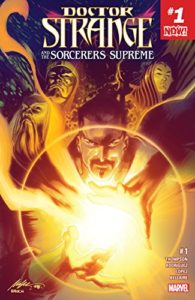 I have a confession to make. Despite ten sustained years of hardcore comics geekery, I am almost entirely unfamiliar with Doctor Strange. I have a passing acquaintance with him, of course—as every storyline in comics inevitably intersects, he’s dashed through the pages of a few titles I’ve read—but I know him as little more than a striking hairdo and an impressive cape. This puts me on even footing with what I imagine to be the vast majority of the population of Earth going into the Sorcerer Supreme’s first foray into the Marvel Cinematic Universe. But fortunately for me, and the other couple billion laymen who lack the time to dive into the character’s daunting back catalogue, Marvel released a new title featuring the character this month. Written by Robbie Thompson, with art by Javier Rodriguez, Alvaro Lopez, and Jordie Bellaire, with lettering by Joe Caramanga, Doctor Strange and the Sorcerers Supreme #1 introduces us to the character and his world with a bang.

Sorcerers Supreme #1 is gloriously, psychedelically weird in a way that no other medium can properly convey. We’re talking Merlin, time travel magic, Sir Isaac Newton, invisible monsters in Manhattan, and that’s just for starters. The book opens in 507 AD with Merlin himself, at what is apparently a turning point in the fight against evil. The action then moves to New York City, where Doctor Stephen Strange, bereft of the bulk of his magical powers, battles a tentacle monster with a battleaxe. Merlin appears and rescues him, only to take him on a mind-bending journey through time and into the thick of another battle—he has plucked several Sorcerers Supreme from their times to help him fight a terrible evil known as The Forgotten. Strange, along with the reader, is thrust headlong into a team-up with the great sorcerers from history both past and present. The team includes Sir Isaac Newton, an adult Wiccan from the Young Avengers, The Ancient One, a badass sorceress called Kushala, later identified by Merlin as Demon Rider, and a dual sword-gun (yes, sword-gun) wielding woman identified only as Nina.

By introducing Strange into a team that already exists without him, the story cuts to the chase. It’s a clever move for a new team book to not get bogged down in introductions, and it’s extremely well-executed—introducing five new characters in two pages mid-battle isn’t easy to do, but Thompson wastes no time or words getting right to the good stuff. But it’s the art of Rodriguez, Lopez, and Bellaire that really sells this book.  Every panel is dynamic, but none more than the pages in which Strange and Merlin traverse the “backroads of time.” The two-page spread is one of the most complex and beautiful I’ve ever seen in comics, a saturated trip reminiscent of the silver-age greats.

If this inaugural issue is indicative of the weirdness to come, Doctor Strange and the Sorcerers Supreme is definitely going on my pull list. I highly recommend checking it out. 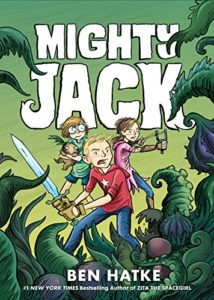 Everyone knows the story of Jack and the Beanstalk, and I expected Ben Hatke’s Mighty Jack, the first in a new series, to hew close to the line. (Pun very much intended.) However, where the fairytale takes Jack high into the sky to steal from—and then murder—a giant, Hatke’s contemporary Jack has more complicated problems. His single mother works two jobs and wants Jack to step up and help out more, particularly by watching his young sister Maddy, who doesn’t speak.

There’s nothing Jack won’t do for his sister, so when she wants a box of strange seeds at the flea market, Jack acquiesces to the seller’s demands and hands over the keys to his mother’s car. From those seeds a wondrous garden grows—full of delights and dangers in almost equal measure. Joined by their fearless neighbor Lilly, the three of them joyfully wrangle the garden . . . until an accident forces Jack to face some harsh realities.

This story, like its source material, tackles the knotty issue of growing up. Where is the line between adventure and responsibility, between safety and risk? Thankfully, Hatke offers no easy answer. The garden is glorious, the garden is dangerous . . . just like life. I can’t wait to see how Jack navigates this thorny issue and finds his place in between. (Most of us are still looking for that place ourselves.)

Fans of Hatke’s brilliant Zita the Spacegirl series will love this story as well. (And if you haven’t bought Zita and given a copy to every kid you know while also accidently keeping a copy for yourself, then we can’t be friends.) The same strengths are on display here: wild creativity, an intoxicating sense of wonder, and a clean, expressive art style that highlights the characters and makes the story easy to follow. Hatke’s garden creatures can morph from awe-inspiring to terrifying and back again in the space of a single panel. The colors, achieved by Alex Campbell and Hilary Sycamore, are muted and almost glowing, creating a magical overtone that keeps some of the scarier moments from veering too dark. The minimalist style and emphasis on visual storytelling also make the book an excellent choice for children or adults unfamiliar with graphic novel reading conventions. (You never have to guess which panel to read next; it’s always obvious.) 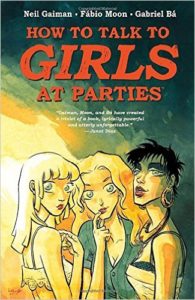 “How to Talk to Girls at Parties” (2006, Fragile Things) is my favorite Neil Gaiman short story. (You can find it online now, too: bit.ly/1kiIYnA) When I saw it had been adapted into a graphic novel, illustrated by brothers Gabriel Bà and Fàbio Moon, I was eager to pick it up.

Two fifteen-year-old boys, Vic and Enn, are on their way to a party. To Enn, girls are daunting, mysterious, incomprehensible. Confident Vic assures him girls aren’t so strange; they’re not from a different planet. “Just talk to them.”

After Vic disappears with the beautiful hostess, Enn wanders. Taking Vic’s advice, he talks to girl after girl, only to find they are as strange as he’d imagined and feared. They let slip disjointed pieces of alien lives in which they were incarnated as insects, or swam in sunfire. Enn doesn’t seem to register their odd narratives. They are girls; of course they speak strangely. In surreal moments, he responds to a confession about alien slavery by offering water, and to another girl’s story about being engulfed and reincarnated by attempting to put his arm around her.

Enn’s lonely, adolescent struggle to place himself in a universe he doesn’t understand is lovely and poignant. Although the story places him in a universe stranger and more vast than the one we know, all adolescents eventually have to make the leap from a childhood world to something immensely broader.

Although the short story handles it well, this kind of plot lends itself to a severe potential pitfall: Girls aren’t actually aliens. Obviously, everyone knows this, but there remains a substantive volume of sexist, or at least aggravating, text that treats women as if they are. Fortunately, the graphic novel avoids that trap using the same techniques as the short story, including Vic’s contrasting point of view, the alien girls’ inner lives, and the retrospective narrative voice of Enn’s older, wiser self. (Although the retrospective voice is an important part of the story, it also sometimes felt clunky, like an interjection from the older work.)

The art is glorious.

The alien girls are rendered with distended figures, odd proportions, and enormous staring eyes, lovely but also slightly disturbing in a way that immediately, viscerally places the reader within the surreal world. Hot and cold colors wrestle with each other, the sharpness of their contrasts and shadows mimicking the tug between the real world and the surreal one. The images are often cramped, filled with figures ranging from fully rendered to barely sketched, with the sound-effects of heavy music winding between them. The panels are inflected with Enn’s point of view; he sees the objects of his obsession—women’s faces, women dancing— while unknown boys only appear as foils.

An important test of an adaptation is whether the new form gives the old one new perspective and depth. With this graphic novel, Gaiman, Bà, and Moon have definitely accomplished that goal. 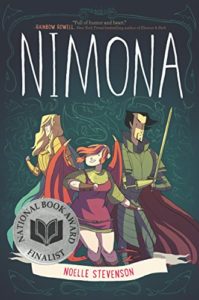 Given how many awards Nimona has won since it came out in 2015, one could say that I’m a bit late to the party. It was actually its acclaim that made me hesitant to pick it up—would it be dark, heavy, important reading? Was I up for that?

Why, yes, in fact, it’s all of those things—it’s also warm and funny, absurd and delightful.

Ballister Blackheart wasn’t looking for a sidekick, but he found one anyway in Nimona, a shape-shifting teenaged girl with pink hair, multiple piercings, chain mail and a knack for super-villainy. Blackheart reluctantly accepts Nimona’s aid in bringing down the nefarious Institution and its plot to cultivate the deadly jaderoot plant—a plan made more difficult by the Institution’s employment of Blackheart’s nemesis, Sir Goldenloin.

The setting is a mashup of medieval-esque fantasy tropes and super-hero science fiction, perhaps best summed up in a panel of the “Science Expo,” where peasants wander between half-timbered houses and festival tents beneath a banner announcing “Robot Fight!” A lair lit entirely by torchlight and candles comes equipped with a big-screen television and video conference capabilities; characters may be armed as readily with bow and arrow as with ray guns. Blackheart’s scientific view of the world is confounded by Nimona’s failure to conserve mass when shapeshifting. The contradictions add a light-hearted absurdity to a story that becomes deeper, darker, and sadder as it progresses.

As Blackheart warms to his new role as Nimona’s friend and mentor, both find past betrayals revisited in the present. Stephenson treats every character with tremendous respect, revealing to the reader their complicated motives and imperfections while still celebrating their strengths and inherent morality. Nimona is a funny, thoughtful and revealing exploration of trust, love, and compassion, and a moving reminder to look deeper at those we think we have figured out.

Rachel Swirsky holds a masters degree in fiction from the Iowa Writers Workshop, and graduated from Clarion West in 2005. She’s published over 50 short stories in venues including the New Haven Review, Clarkesworld Magazine, and Tor.com. Her short fiction has been nominated for the Hugo Award, the Locus Award, and the Sturgeon Award, and in 2010, her novella The Lady Who Plucked Red Flowers Beneath the Queen’s Window won the Nebula. If it were an option, she might choose to replace her hair with feathers, preferably bright macaw feathers.