This month, I’ll be reviewing The Emerald Circus by Jane Yolen, The Overneath by Peter S. Beagle, and Terminal Alliance by Jim C. Hines.

Jane Yolen is one of the most prolific writers I know. Her works span from YA to adult to children’s books to graphic novels to nonfiction. With her newest short story collection, The 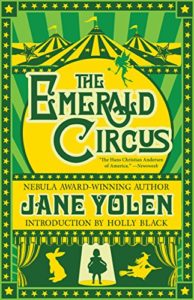 Emerald Circus, she’s returning to her fantasy roots, but hopefully to a new audience. All of the stories have appeared in other places, but if, like me, you haven’t had a chance to read her short fiction, this is a good collection to get. Most of the stories can be divided into three categories: retellings of beloved fairy tales (usually focused on strong girls), alternate takes on historical characters, and reimaginings of Arthurian tales.

The stories were hit or miss with me. While the re-imaginings were enjoyable, the stories left me wanting more. “Lost Girls” focuses on Darla, who is kidnapped by Peter Pan to become his newest Wendy, but instead musters the other girls who are forced to cook and clean for him to go on strike. The Peter Pan figure is older, crafty, and a little frightening, but the story ends just as it starts getting interesting. “Blown Away” has a world-weary Dorothy returning to Kansas, describing Oz as a faraway circus where she learned gymnastics and tightrope walking. It made me want to read that story, as opposed to Dorothy recounting it to her relatives years later. On the other hand, “The Gift of the Magicians, with Apologies to You Know Who,” a mashup of the Beauty and the Beast with “The Gift of the Magi,” was brilliant all the way to its surprising end.

I’m not a huge Arthurian fan, so the stories such as “The Quiet Monk” and “Evian Steel” went right over me. They were beautifully written—they just didn’t grab me. However, the historical reimagining of Queen Victoria in “The Jewel in the Toad Queen’s Crown” was satirically wicked and “Sister Emily’s Lightship,” Emily Dickinson’s encounter with an alien, was gorgeous and lovely and just the right amount of perfection for a short story.

What really grabbed me, finally, was the story notes at the end of the book. Yolen not only recounts the circumstances on how each story was born, but she also includes a poem for each story that is just as delightful, haunting, and gorgeous as the original work, and in a couple of cases, outshining it. “Dorothy Before Oz” gives a better sense of Dorothy’s world-weariness than “Blown Away,” and I enjoyed “Maiden v. Unicorn” far more than the story it was written for, “Belle Bloody Merciless Dame.” It makes me eager to read more poetry from Jane Yolen—I’m sure there’s a collection out there with just that. 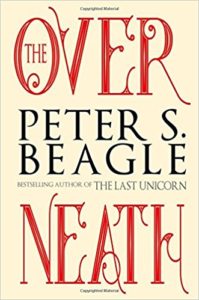 Another short story collection put out by Tachyon Publications, Peter S. Beagle’s The Overneath is sure to be a hit with fans eager for more tales of unicorns. I fell in love with Beagle’s stories when I read The Innkeeper’s Song in high school. For those who know his works, you might already be familiar with some of the stories in The Overneath. If you haven’t, however, like I mentioned with Jane Yolen’s collection above, this is a good way to be introduced to his short fiction, with some new pieces to boot.

Whereas Yolen’s collection was focused on retellings and re-imaginings, Beagle’s short story collection focuses mainly on magical creatures, specifically unicorns, or those who have had dealings with such animals. Yes, our favorite wizard, Schmendrick, has not just one story, but two—“The Green-Eyed Boy,” a story of him as a boy apprentice to the Wizard Nikos, and “Schmendrick Alone,” which is the account of when he summons a demon for the first time (and certainly not the last). Both stories give a nice fleshing out of the wizard we meet in The Last Unicorn, and a better understanding of why he does the things he does. Another tale set in The Innkeeper’s Song universe, “Great-Grandmother in the Cellar,” is a chilling story which makes you wonder who, exactly, is the monster of the story—the dead grandmother, the paramour who puts the protagonist’s sister under a sleeping spell, or the protagonist himself, who thinks so little of his sister to begin with.

Not all the stories in this collection are set once upon a time so far away. The story “Trinity County, CA: You’ll Want to Come Again and We’ll Be Glad to See You” deals with a couple of narcs driving up Santa Cruz flushing out agents who deal in illegal dragon-raising. “Underbridge” is a story about a graduate school professor keeping his sanity intact by caring for a troll statue, and “Music, When Soft Voices Die,” is a haunting tale of a man who, in creating a device to reproduce sound, manages to capture the grief at the center of the world. And my favorite story: “The Very Nasty Aquarium,” which is a charming story of two older women fighting a duppy to keep an aquarium clean and safe.

The story notes that accompany each story are briefer than in Yolen’s collection, but I think the stories are more rounded and overall more satisfying. And the stories in this collection do invite you to visit more of the worlds he created, or at least delight in them anew. 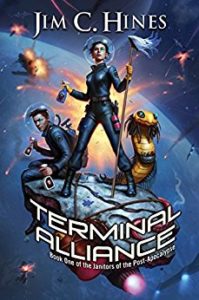 I know Jim C. Hines mainly for his essays and articles on his blog dealing with gender and race, but have never read his fiction work until now. Terminal Alliance, which is being called his first venture into military science fiction, is both fun and endearing.

In the future, a virus has reduced humankind to little more than zombies. An alien race called the Krakau saved the human race from extinction and introduced them to the galaxy, albeit in lesser roles. Marion “Mops” Adamopoulos is the head of the Shipboard Hygiene and Sanitation crew of the spaceship Pufferfish when a bioterrorist attack reverts most of the human crew to back to zombies, leaving her and her team the only survivors. With help from their ship’s AI, Mops and her team attempt to find a cure for the rest of the ship’s crew, and in the process stumble upon the true nature of their civilization’s destruction, as well as a conspiracy that threatens to unravel an alliance of the entire galaxy.

The humor in this book reminded me a lot of The Hitchhiker’s Guide to the Galaxy, though there’s also a lot of toilet humor—then again, Mops and her crew are janitors; gaseous and body emissions come with the territory. Besides that, I laughed a lot reading this book. The help tutorials of the ship, modeled after a certain word processor’s help tool, were hilarious. Mops’ crew throw their own measure of chaos into the mix—Monroe, a former soldier turned janitor with a sentient robotic arm; Wolf, a gung-ho newly restored human ready to punch everything within her reach; Kumar, who has a phobia against germs; Doc, the ship’s AI who is both helpful and a wiseass; and Grom, the only non-human on Mops’s team, who has a penchant for video games.

Beyond the humor, there were also some interesting moments in the book. The aliens in the books all treated gender in intriguing ways that made me want to see more. And there are a couple of scenes where Mops and her crew talk about what it means to be human—although the Krakau rescued them, they did so by reconstructing their bodies to the point where they would be considered more cyborg than human. But is that still better than shuffling around in a zombie state? What does it mean to be human when you have no connection to the past, when your history is told by someone else? I hope Hines will continue to explore this more in subsequent books. It feels like he’s touching on some deep philosophical issues that might go deeper than the toilet humor presented here.

In the meantime, Terminal Alliance is a quick, fun read. And I do find myself appreciating those in the sanitation industry a lot more. If there’s anything this book has taught me, it’s that janitors know the ins and outs of everything.