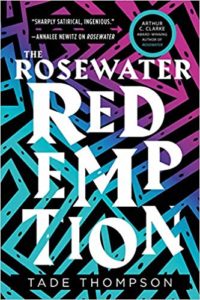 Remember the last section of the song “In the Hall of The Mountain King” where the instruments go faster and faster until all the drums and horns and strings explode in a giant cacophony of sound? Tade Thompson’s Rosewater Redemption is like that. Just swap out the drums for the citizens of Rosewater, the horns for the aliens, and the strings for a group of ragtag people working frantically to save the world from colonization, and you’ve got the finale of this exceptional trilogy.

I reviewed the first book in this trilogy, Rosewater, in my August 2018 book review column (bit.ly/2mLQZjF). It’s best to read that and its follow-up, Rosewater Insurrection, before you read this one, since events escalate and the cast takes on new roles. The first book focused on Kaaro, the psychic government agent who lives in Rosewater, a city that has sprung up around a biological dome created by aliens attempting to make Earth their home. In Rosewater Redemption, Kaaro fades to the background (in his own cowardly fashion) to let others take on the narrative.

Aminat, Kaaro’s girlfriend, now works as the Head of Security for the self-proclaimed mayor of Rosewater, Jack Jacques. His wife, Hannah, has a horrible secret that will undo everything he has worked for. Femi, Kaaro’s former boss, is trying to prevent the aliens from taking over even though she’s imprisoned by the government. She has a plan to take out the xenosphere, a spore-based psychic environment that is the aliens’ only source of communication. However, the xenosphere is the only place where Oyin Da—the elusive Bicycle Girl—and others like her can survive. Oyin Da recognizes the need to save the world from aliens, but at the same time wants to preserve the aliens’ infrastructure. Thompson shows that while revolution is good, it brings up extremely complicated questions, and not everyone will benefit from it.

He also wrestles with the question of what it means to be human. In one instance, an alien creates a copy of a dead woman complete with her memories and personality. Is that copy still a human? Jack’s assistant and bodyguard, Lora, is an android, but she is like a sister to Jack. Is she human? Oyin Da no longer has a body, yet she can manifest in a (mostly) physical form, as well as traverse time. Is she human?

On top of all this, Thompson layers on queer joy. It seems zany to hold a gay pride parade with all the violence happening in Rosewater, but its sweetness and celebration serves well to bring the trilogy into an amazing climatic finish. 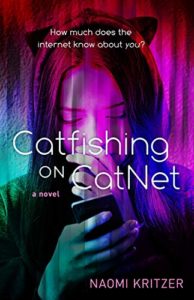 In 2016, Naomi Kritzer won the Hugo for her short story “Cat Pictures Please” (bit.ly/2mNUMNo), about an Internet AI that uses their power to try to help humans in exchange for cat pictures. Kritzer’s YA novel, Catfishing on CatNet, expands on the story and gives it a bit of a thrilling twist that is still delightful and sweet.

Steph is a high schooler who has been on the run with her mother as long as she can remember. Her childhood consists of having her whole life uprooted about every six months whenever her mother feels the threat of Steph’s father finding them. The only constant in her life is CatNet—a virtual chat room where she can hang out with her chat mates, the only friends she has. Little does she know that the admin of the chat room, CheshireCat, is an AI. When Steph’s safety is threatened, CheshireCat steps in to help in only the way an AI can—by utilizing the entire Internet as well as mobilizing Steph’s friends, both online and offline.

Kritzer handles the rockiness of teenage years with a sweetness that is both charming and cringeworthy—from the awkward screaming in all caps from a virtual friend in their eagerness to welcome a new member, to the hilarity of listening to a hacked teacherbot truthfully answer questions about sex to a classroom of teens. But she also explores how friendships can be nurtured through social media. Steph struggles with loneliness, so it surprises her when she’s able to make friends at school. She then introduces her school friends to CatNet, which becomes a central hub, a meeting place, a hangout, and later in the book, a crisis management center. It’s lovely to see how her chatroom buddies rally to take care of her, even to the point of meeting in real life.

Like Rosewater Redemption, Kritzer also uses CheshireCat to explore what it means to be human, though she takes a simpler approach than Thompson. It also helps that CheshireCat is in good company—most of the humans they associate with are also figuring themselves out. In CatNet, the kids have a safe place to explore with sexual identity in a way that’s affirming and positive. The online kids correct and educate each other on the careful use of terms and pronouns—even CheshireCat is referred to as a “they” rather than an “it.”

And that makes a huge difference, especially as Steph uncovers the story of her past, the real reason why her mother is on the run, and how CheshireCat may have more in common with her than she thinks. But overall, despite some heavy topics and dark moments, I found this to be a quick, charming read.

Oh, and there are cats. This is a story about the Internet, after all. 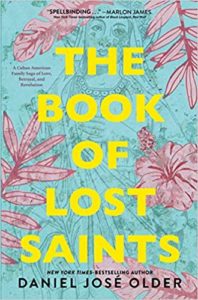 Like Catfishing, The Book of Lost Saints also deals with a disembodied force attempting to help out someone, but in a more mature, and perhaps more desperate, fashion.

Marisol is a ghost. She has no memory of who she is, what she is, or why she exists. She can only remember a couple of things: that she had two sisters, one of whom fills Marisol with deep rage, though she can’t remember why. And she knows that the man she appears in front of is her nephew, Ramón, a hospital worker moonlighting as a DJ. In order to keep herself together, Marisol must use Ramón to uncover her past, and in the process, bring her own self back into existence.

As a ghost, Marisol doesn’t have the capacity to talk to Ramón directly, so she does little tricks to reveal herself. Opening a photo album to a page of herself as a child. Revealing memories in a dream. Unfortunately, Ramón is barely aware of Marisol. On occasion, he reacts as if he’s aware of a presence, or he catches a glimpse of her, but forgets it in the next moment. But without knowing why, Ramón begins to inquire about his aunt, and in bits and pieces, Marisol’s past become revealed. A casual mention of her name. An older sister who goes to join the Cuban revolution. Her own disappearance and death. But the story is long and winding, and it takes both Marisol and Ramón from their city in New Jersey to their homeland of Cuba.

The language of this story is beautiful. Older’s writing is infused with music and rhythm, which is intertwined with Marisol’s nostalgia for the past, even if she can’t remember it. His world is sensual and melodic, but also full of rage at corrupt government systems, and the helplessness of those caught up in it. There is a heart-aching scene where Marisol’s older sister realizes much too late the consequences of joining the rebel side of the Cuban revolution. Her and Marisol’s involvement in the war puts human faces on a country’s history I know little about, but that I wish to learn.

In addition to putting her own life together, Marisol finds herself doing the same for Ramón: dealing with the mundane horror of hospital work, navigating the family dynamics of not wanting to talk about the past, fending off the unwanted attention from a Cuban-American politician who wants to use him to further his own career, and above all, trying to express his feelings towards his girlfriend, Aliceana, which results in some passionate scenes that are too much for Ramón to handle emotionally. Marisol is unashamed in witnessing her nephew’s sexual encounters. To her, it is another form of expression. She is there to observe and provide invisible comfort.

At times dreamy, other times sensual; at times angry and bleak, other times filled with hope, The Book of Lost Saints is a beautiful story about dealing with the trauma of the past, the importance of knowing your own history, and, most of all, resistance and the choices we make that define us.